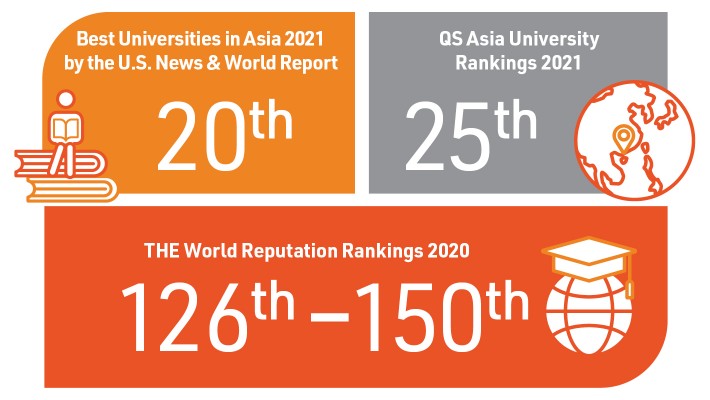 The University’s pursuit of academic excellence has been recognised in recently released world university rankings.

In the Times Higher Education (THE) World University Rankings by Subject 2021, PolyU was ranked in the top 100 globally in four disciplines – 29th in Business and Economics, 75th in Engineering and Technology, 79th in Computer Science, and 82nd in Social Sciences. The league table ranked more than 1,500 universities from around the world according to ﬁve indicators, including their teaching and learning environment as well as research volume and reputation.

PolyU was also listed in the THE World Reputation Rankings for the ﬁrst time, placing in the 126th-150th range. This exercise ranks universities around the globe based on responses to the world’s largest invitation-only opinion survey, which asks senior and published academics to name no more than 15 universities that they consider to be the best for research and teaching in their ﬁeld.

Meanwhile, in the QS Asia University Rankings 2021, PolyU came 25th out of the top 500 universities in Asia. The rankings were based on 11 criteria, including academic reputation, employer reputation, and international research work.

Separately, in the 2021 edition of the Best Global Universities rankings released by the U.S. News & World Report, PolyU was ranked 20th in Asia. In terms of subject rankings, Civil Engineering led the way being ranked 3rd globally, followed by Engineering and Mechanical Engineering, which were placed 12th and 15th respectively. The Best Global Universities rankings are based on 13 indicators, including global and regional research reputation, the number of publications that are among the 10% most cited, and the normalised citation impact of publications.

PolyU will reference these rankings to identify areas for continuous improvement in order to further elevate its performance in education and research. Through the concerted eﬀorts of members of the University, PolyU strives to make further advancements to remain competitive among leading academic institutions.

From September to December 2020, the following PolyU members were either appointed significant duties to share their scholarly expertise to benefit the wider community or had their academic efforts duly recognised. (listed in alphabetical order)  ... 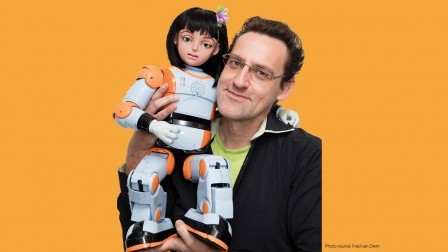 Professor Johan Hoorn and his research team have won the Huibregtsen Prize 2020 for their robotics research project “Alice”, a robot girl who helps elderly people feel less lonely. He teaches at both the Department of Computing and the School of... 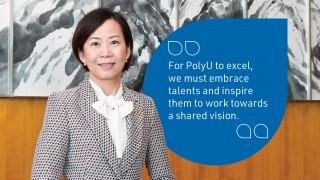 Dr Miranda Lou has extensive strategic, business and management experience in both the private and public sectors. Dr Lou joined PolyU in 2015 as Vice President (Administration and Business) and was appointed Executive Vice President in 2017. She...