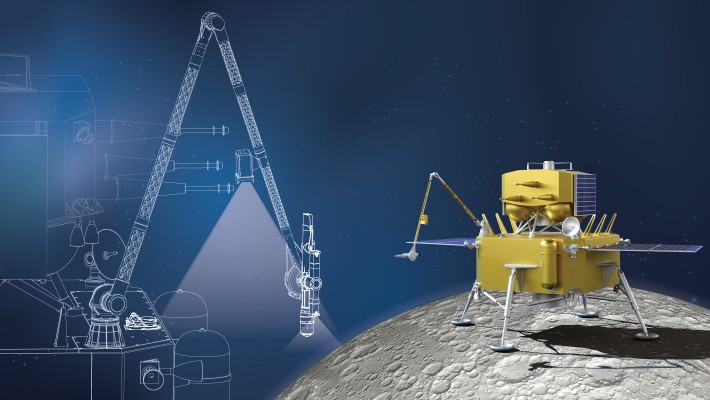 The Hong Kong Polytechnic University’s (PolyU) research excellence contributed to China’s Chang’e 5 mission, which successfully collected lunar samples from the Moon and brought them back to Earth for the first time in the Nation’s history. Through cross-disciplinary efforts, PolyU designed and manufactured the “Surface Sampling and Packing System”, a state-of-the-art innovation that uses robotics for lunar sample acquisition. As the invention was developed and made in Hong Kong, the achievement not only reflects PolyU’s capabilities, but those of the Hong Kong community as a whole.

Chang’e 5 was not only China’s ﬁrst undertaking to acquire rocks and soil from the Moon’s surface, but it was also the world's ﬁrst attempt to do so for more than 40 years since the last lunar mission occurred in 1976. The historic mission started when the Chang’e 5 spacecraft – comprising an orbiter, an ascender, a lander and a return vehicle – was launched by the Long March 5 rocket on 24 November 2020. On 1 December, the ascender and lander of the spacecraft landed on the Moon to collect lunar samples. The 23-day space expedition concluded when the Chang’e 5 capsule brought lunar samples back to Earth on 17 December.

Chang’e 5 collected moon samples through two means, using a robotic arm for surface sample collections and a drilling machine to collect underground samples. The “Surface Sampling and Packing System” developed by PolyU’s research team in collaboration with the China Academy of Space Technology (CAST) was responsible for collecting the surface samples.

Dr Lam Tai-fai, PolyU Council Chairman, said: “The collection of lunar samples is a landmark occasion in the history of our Nation’s space exploration programme. It is a great testament to our University’s cutting-edge research capabilities that PolyU was the only tertiary institution in Hong Kong to contribute to the Chang'e 5 mission.” 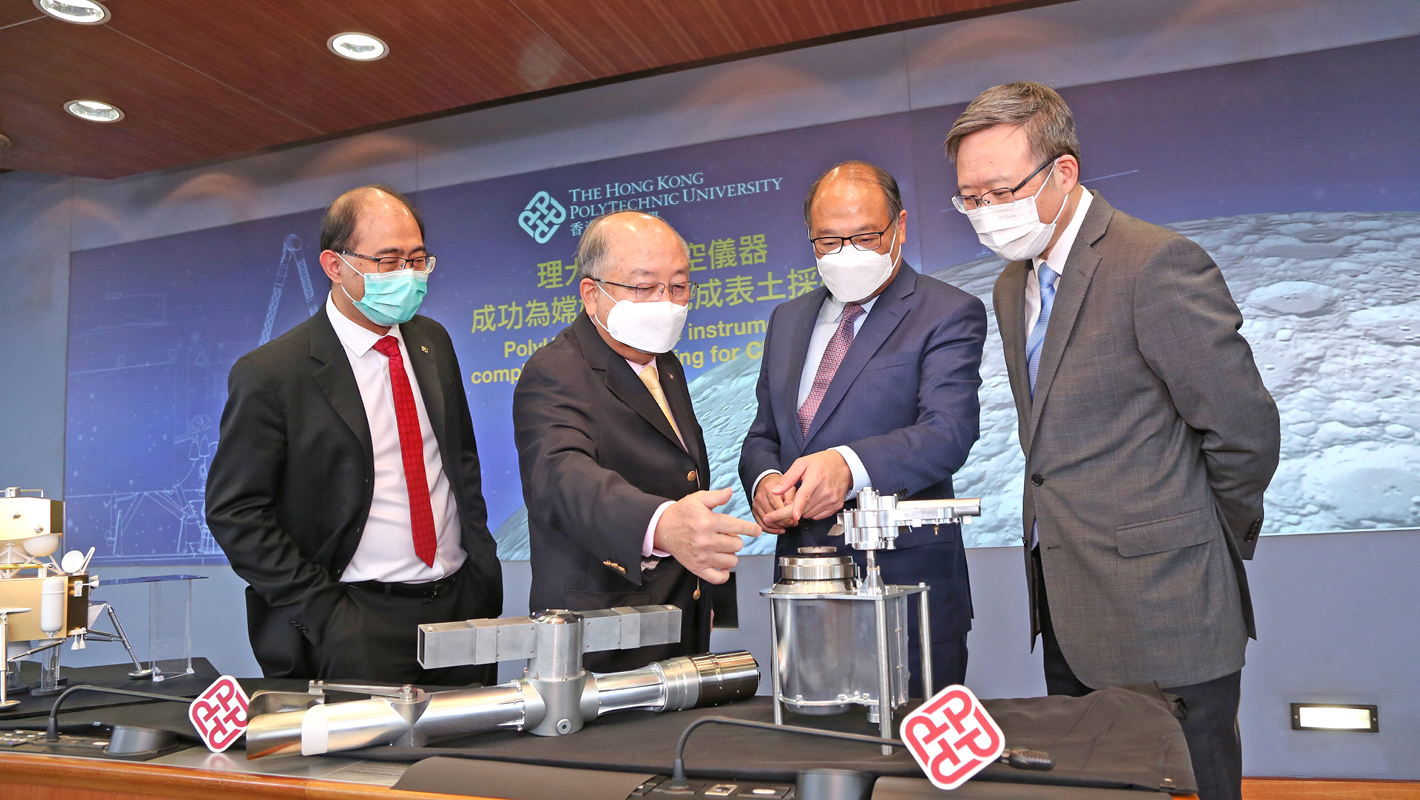 The PolyU-developed system is a highly sophisticated invention that uses robotic technology for lunar sample acquisition – a method which is unprecedented. It was developed by a research team led by Professor Yung Kai-leung, Associate Head of the Department of Industrial and Systems Engineering, and Sir Sze-yuen Chung Professor in Precision Engineering. The team comprised more than 20 members, with Dr Robert Tam, Associate Director of PolyU’s Industrial Centre, as a key member.

PolyU is honoured to be the only tertiary institution in Hong Kong to contribute to the Chang'e 5 mission. – Dr Lam Tai-fai, Council Chairman

While the regolith collection from the surface of the Moon took just 20 hours to accomplish, the lunar exploration project required many years of research and preparation work. The CAST commissioned PolyU to develop the sample collection and packaging device back in 2011. 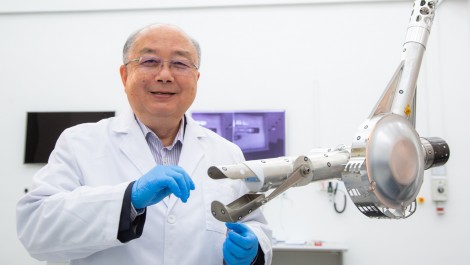 Professor Yung with Sampler A designed for collecting loose regolith

“The challenge was that we were preparing for the unknown. We had no definite idea of what to do and what to design because there was no reference available. Collecting a large quantity of lunar samples through robotic means was unprecedented,” Professor Yung explained. It was not until 2017 that his team finally solved all the technical problems to deliver the project.

Professor Yung’s team had to overcome various hurdles created by the extreme environment of the Moon and outer space. These included the high daytime surface temperature of the Moon, the impact and shock the equipment would endure at diﬀerent stages of the lunar journey and very strict payload constraints.

A system with 400 components

After six years of continuous effort and thousands of rounds of trials, the team ﬁnally came up with a system made up of more than 400 components, with each component made of the optimal material, such as titanium alloy, aluminum alloy and stainless steel. 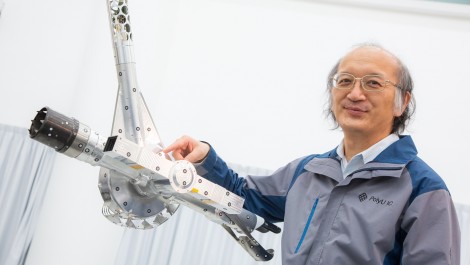 Every component of the System was precisely designed for the mission. “The manufacturing of the System parts is technically complex and requires a very high level of precision, accuracy and reliability,” Dr Tam said. PolyU’s pioneering Industrial Centre played a pivotal part in the manufacturing, assembling, testing and quality control of the space instruments.

Designed to withstand temperatures of 200°C, the state-of-the-art System contains two samplers to collect lunar regolith in both loose and sticky forms. It also has two built-in heat-resistant near-ﬁeld cameras for vision guidance during sample acquisition, and a sealing and packaging system to store and seal the samples in a container.

To comply with the stringent weight constraint, the samplers were designed to be able to perform multiple functions. As well as acquiring lunar regolith, they were also able to pick up and move the sample container from the lander to the ascender. “To keep all the components cool, something like a refrigerator was also included in the compact design,” Professor Yung said.

The meticulous eﬀorts of the research team paid oﬀ. After Chang’e 5 landed on the near side of the Moon, the System’s samplers acquired 2kg of surface material from the Moon and sealed them in the container. The robotic arm then lifted the container and placed it into the ascender. The ascender blasted oﬀ into lunar orbit, rendezvoused and docked with the orbiter and transferred the sample container to the return vehicle for the journey back to Earth.

Main instruments and their features 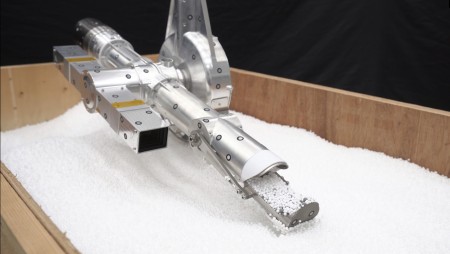 Sampler A, which is around 35 cm in length, is engineered for collecting loose regolith. It can dislodge excessive debris, chisel away large pieces of regolith, and deposit the selected samples into the container without contaminating the surroundings. 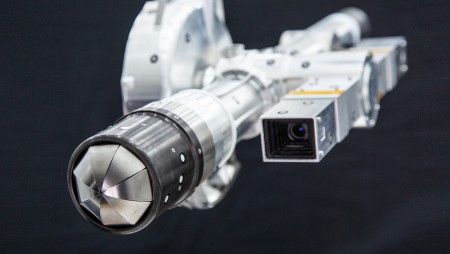 Sampler B, which is around 30 cm in length, is used to collect sticky samples by coring into the ground using teeth-like metal flaps. 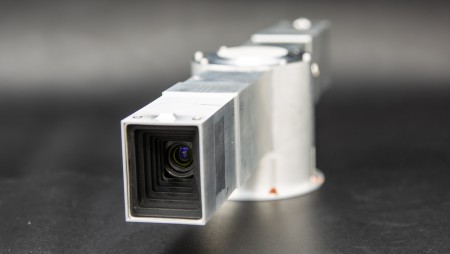 Heat resistant up to 130°C, a near-field camera is attached to each sampler. This camera provides a monitoring and vision guidance system to enable the selection of scientifically valuable lunar samples. 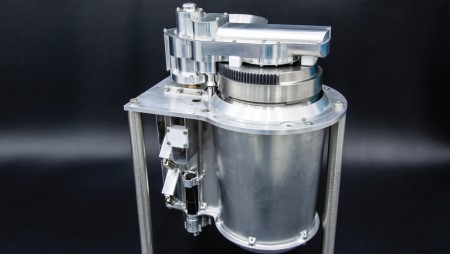 The whole System weighs 1.5 kilograms, of which the sample container weighs only 360 grammes and is used to seal and store the lunar samples for retuning to Earth.

20 years of experience in space exploration

PolyU has been participating in the Nation’s space projects since 2010. The University collaborated with the CAST to develop the “Camera Pointing System” for Chang’e 3 in 2013 and for Chang’e 4’s historic landing on the far side of the Moon in 2019, as well as creating the Mars Camera for Tianwen 1 in 2020. The “Surface Sampling and Packing System” will also be used for the Chang’e 6 mission.

PolyU has accumulated valuable experience in national and international space projects. Over the years, the University has also assisted in other space exploration projects, including the “Mars Rock Corer” for the European Space Agency’s 2003 Mars Express Mission and the “Soil Preparation System” for the Sino-Russian Space Mission in 2011.

Revealing the secrets of the Moon

With the successful re-entry of Chang’e 5’s return vehicle to Earth, China became the third nation in the world to bring back lunar samples. President Jin-Guang Teng said: “PolyU has been honoured to participate in the national space exploration programmes. By contributing to such a sophisticated project, the University has demonstrated its substantial research capabilities and commitment to pushing forward the frontiers of technology and science.” PolyU will continue to make contributions to Chang’e 6 and other national space missions through rigorous scientiﬁc research and the development of innovative technology. 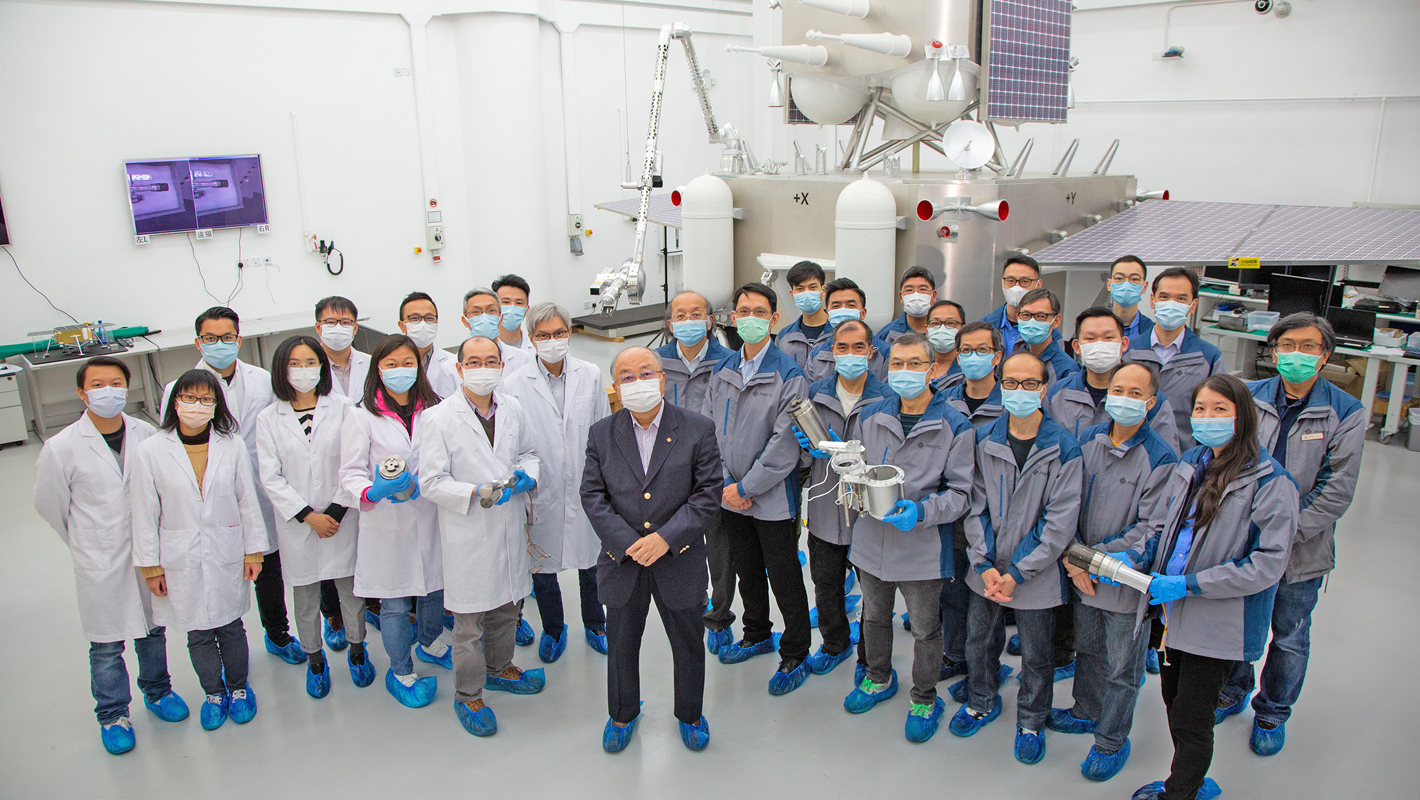 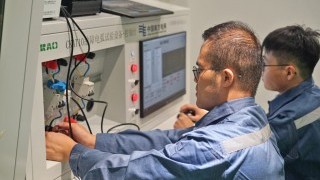 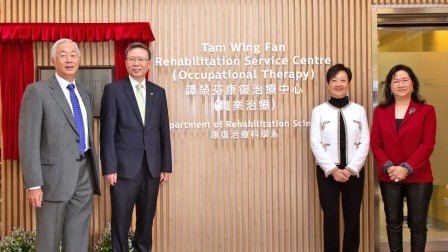 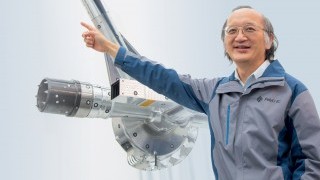