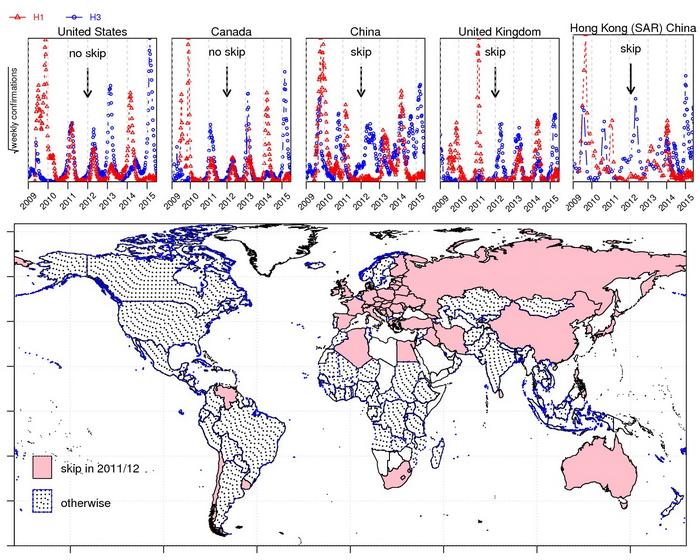 It is generally believed that individuals who get the H1N1 flu vaccine lose their immunity to the H1N1 flu virus in about 10 years, but according to an analysis led by The Hong Kong Polytechnic University (PolyU), immunity lasts for two years.

H1N1, commonly known as "swine flu", was a new flu strain that appeared in 2009 and quickly spread around the world, killing thousands of people. It is now a regular part of the annual flu season.

A research team in China, Australia and the United States used a mathematical model to map the spread of different flu strains between 2006 and 2015 and found H1N1 spread in a "skip and resurgence" pattern in Europe and Eastern Asia. H1N1 was expected to hit again in 2011/12, but no outbreak materialized in these regions. It skipped that year, but came back the next season.

Fundamental epidemiological theory explains this pattern: after the first waves of infection, the population built up immunity and the virus could not explode. But immunity wore off after a couple of years, so enough people were once again susceptible in 2013.

The "skip and resurgence" pattern was observed throughout Europe and Eastern Asia, including United Kingdom and China. However, North America was noticeably different —there was no skip year there.

"Since it was generally believed that all developed countries are highly connected by international flights, such a distinct pattern between Europe and Northern America is very surprising," said Dr He. The researchers suspect different vaccination policies may play a role.

In Europe, less than 30% of the population gets vaccinated, compared to almost 40% in the United States and 30% in Canada. Despite its higher vaccination rates, North America had a much higher incidence rate and associated mortality of H1N1 in 2009 than Europe.

The take up rate of H1N1 in the United States is high. Does it mean that the incidence rate and associated mortality rate will necessarily be low? Different flu strains are actually in competition with one another. If one strain dominates, the others are unable to gain a large foothold in the population and do not spread. In North America, vaccination against another major seasonal influenza strain, H3N2, might have slowed the spread of H3N2, reducing competition with H1N1.

In contrast, Europe and Eastern Asia had an outbreak of H3N2 during the season that H1N1 skipped. But the years that H1N1 dominated, there were far fewer cases of H3N2.

Dr. He stressed, "Vaccination is still the most efficient way to protect humans against the flu. But if the viruses included in the seasonal flu vaccine do not match well against that year’s dominant flu strains, it will reduce effectiveness of vaccination, and infections will surge dramatically. More in-depth study on the impact of vaccination policy, more accurate prediction of future dominant strains and the design of better vaccinations is urgently needed."

Besides the rapid loss of immunity, the transmission rate and the total number of infected population can be estimated with the mathematical model framework developed by Dr He. This study suggests that the dominance of H1N1 and H3N2 will alternate in the near future in many countries.

For their analysis, Dr He and his research team members, including Dr Yang Lin from the School of Nursing and Professor Michael Tse from the Department of Electronic and Information Engineering of PolyU, used confirmed influenza cases from 138 countries compiled in FluNet, a database set up by the World Health Organization to track the flu. Their mathematical model and research was endorsed by world renowned mathematicians and was published in Scientific Reports this year.