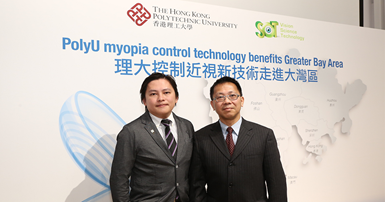 The Hong Kong Polytechnic University (PolyU) today extends its licence on Defocus Incorporated Soft Contact (DISC) technology to Vision Science and Technology Co. Ltd. (VST), a local start-up. The patented technology was licensed to VST last year for commercialisation of DISC lens in Hong Kong. Following the extended licensing arrangement, VST will further promote the product to the cities in the Greater Bay Area and other parts of China in the future. Children and teenagers in the nation will also be benefited from PolyU's research success in myopia control technology to address their vision health issues. The novel DISC technology has been patented in the Mainland, Australia, the United States and various European countries. DISC lens is a multi-zone soft contact lens that provides clear vision and at the same time projects blurred, out-of-focus (defocused) images onto the retina to slow down the increase in axial length of the eye of the myopic patients. The clinical control trial conducted by PolyU showed that DISC lens can effectively retard the progression of myopia by approximately 60% amongst Hong Kong children aged 8 to 13. DISC lens, launched by VST in Hong Kong last year, has received positive responses. To offer the myopic population an alternative, VST today launches a daily disposable contact lens — DISC-1 Day. With the authorisation from PolyU, VST will collaborate with Daylite Vision Care Ltd. to apply for licence application with the China Food and Drug Administration for DISC-1 Day in order to extend the DISC distribution to the Mainland. It is expected that with the licence granted by the Chinese authority, the brand new product will be distributed to the authorised optometric clinics and fitting centres within a year, initially in the Greater Bay Area, and gradually extending across the nation. Dr Dennis Tse, Assistant Professor of the School of Optometry at PolyU, said "We are so pleased that the novel DISC technology was successfully commercialised that many children in Hong Kong can be benefited. We keenly hope that this innovative technological solution can be brought to the Greater Bay Area and other cities in the Mainland to help the nation address the spiralling myopic problem among children and adolescents." VST is a local start-up founded by a PolyU alumnus. VST received support from the HKSTP-PolyU Tech Incubation Fund (TIF) and PolyU Tech Launchpad Fund (TLF). Specialising in developing and distributing products for vision improvement, VST is the first company in Hong Kong that adopts a tailor-made professional fitting approach to manufacture and provide soft myopic control lenses. Under the licensing arrangement with PolyU, VST manufactures and provides DISC lenses via its authorised optometric clinics and fitting centres. The lenses are manufactured according to the prescription of optometrists. Mr Jackson Leung, Founder and Director of VST, said DISC lens has been well received since its launch last year. However, DISC lens users are required to take a regular fitting assessment every three months and to wait for another two weeks for the newly prescribed DISC lens. They also need to clean and disinfect the lens every day. Therefore, some customers wish to have a more convenient option. "VST therefore developed the brand new DISC-1 Day in order to offer the myopia population with another choice. DISC-1 Day lens is readily available upon optometric fitting assessment, and is for daily wear and disposal without the need for care. With power of myopia correctable up to 10.00 diopters, it is of the highest diopter with ultraviolet protection among all similar products in the market." VST was awarded a total of HK$1.6 million, including a matching fund, under TIF and TLF schemes. Both schemes are funded by the Technology Start-up Support Scheme for Universities under the Innovation and Technology Commission of the Hong Kong Government. PolyU has been committed to promoting technology and knowledge transfer, nurturing entrepreneurial culture and providing support to aspiring entrepreneurs. Besides supporting start-ups by offering various seed funds, the University also provides co-working space for entrepreneurs at InnoHub in both its Hong Kong campus and Shenzhen Base, mentorship support through the Startup Consultation Clinic manned by Entrepreneurs-in-Residence, training workshops for entrepreneurs, and networking opportunities with incubators and investors. In line with the Hong Kong SAR Government's proactive endeavours in developing the Guangdong-Hong Kong-MacauGreater Bay Area, PolyU will put in further efforts in technology innovation and knowledge transfer in the region.   *****END**** 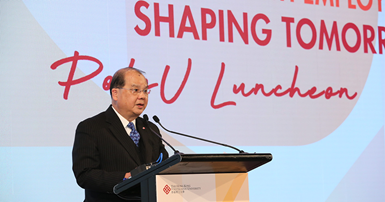 The Hong Kong Polytechnic University (PolyU) hosted a luncheon today to engage over 220 local and multi-national firms from various sectors, including finance, engineering, construction, logistics, healthcare and hospitality. Themed "Partnering with Employers – Shaping Tomorrow's Talent", the Luncheon served to provide an opportunity for PolyU to connect with the current and potential employers of its graduates. The Hon Mr Matthew Cheung Kin-chung, Chief Secretary for Administration, HKSAR Government attended the event as the Guest of Honour and delivered a speech. "The Government has a clear vision to develop Hong Kong further into a high value-added and diversified economy. To this end, we need to develop a good mix of talents who have broad horizons, equipped with different skillsets and a solid grasp of international affairs, to sustain our competitiveness and contribute towards the diversified development of Hong Kong," Mr Cheung said. "I am delighted to note that universities have responded positively to the Government's call for promoting innovation and technology and offered more cross-disciplinary programmes in the planning cycle, including programmes on artificial intelligence and financial technology," he said. "I am confident that PolyU's partnership with the Government and the business community will go from strength to strength, and that the graduates will excel on all fronts." Professor Philip C. H. Chan, Interim President, PolyU also took the opportunity to share with the employers PolyU's vision in education. He said "PolyU, through the provision of a holistic education, aims to nurture future-ready graduates who are professionally competent, socially responsible, innovative and entrepreneurial." PolyU has an unique strength in grooming specialised professionals in  more than 10 disciplines, including Aviation Engineering; Design; Environmental Engineering and Sustainable Development; Fashion and Textiles; Land Surveying and Geo-Informatics; Sustainable Structural and Fire Engineering; Optometry; Occupational Therapy; Physiotherapy; Radiography; and  Transportation Systems Engineering. Many of the subjects are ranked among top 50 in the world. For instance, according to the QS University Ranking, our Civil and Structural Engineering subject is ranked 10th in world; while our Hospitality and Leisure Management subject is ranked 3rd in world. PolyU's Faculty of Business ranked 3rd in Asia and 17th in the world in 2018 KUBS Worldwide Business Research RankingsTM. PolyU constantly develops new programmes to keep up with the times and support students map their future path. For example, BSc(Hons) in Financial Technology and Artificial Intelligence will be rolling out in the academic year of 2019 to meet the upcoming needs for Fintech and AI roles such as data scientists, software engineers, and machine learning engineers, etc. PolyU's graduates are well poised to seize the opportunities in the global landscape as well as those presented by nation's initiatives along the Belt and Road and in the Greater Bay Area. The employability of the PolyU students is well illustrated by the survey results on the destinations of PolyU graduates. About 4,000 out of the 4,671 graduates provided response to the survey. Over 83 per cent were employed / self employed by December 2017, while more than six per cent carried on their studies. Over 92 per cent of the graduates received their first job offer by end of September and the monthly salary of the graduates of some programmes could be as high as $32,000. Dr Miranda Lou, Executive Vice President, PolyU, in her closing remarks, thanked the employers for joining hands with PolyU to nurture the rising generation. She urged the employers to continue to partner with PolyU so that its graduates could better contribute to the social and economic development of Hong Kong, as well as bringing positive changes to our society and our world.   *****END**** 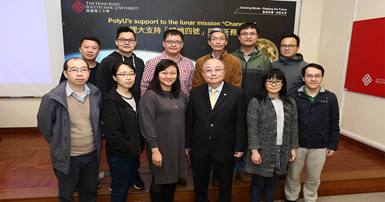 Research & Innovation Faculty of Construction and Environment | Faculty of Engineering

The Hong Kong Polytechnic University (PolyU) will offer 90 taught postgraduate programmes in 2019/20, and is now inviting applications. Addressing the evolving needs of the society and the industries, PolyU remains committed to providing dynamic and high-quality programmes for nurturing talents to be capable of facing challenges of the times. In the coming academic year, PolyU is going to launch new programmes such as Master of Science in "Global Food Safety Management and Risk Analysis", "Accounting and Finance Analytics", and "Business Analytics". There are also programmes with restructured curriculum, such as "Industrial and Systems Engineering" and "Management and Marketing". PolyU's "Info Day for Taught Postgraduate Programmes" will be held on 12 January 2019 (Saturday) from 2pm to 6pm on PolyU campus to provide prospective applicants first-hand information and consultations on their further studies. More than 80 information seminars and consultation sessions will be organised by the eight Faculties/Schools of PolyU: Faculty of Applied Science and Textiles; Faculty of Business; Faculty of Construction and Environment; Faculty of Engineering; Faculty of Health and Social Sciences; Faculty of Humanities; School of Design; and School of Hotel and Tourism Management. For more details of the Info Day, please visit:- http://www.polyu.edu.hk/tpginfoday. For programme details and application procedures, please visit Study@PolyU website https://www.polyu.edu.hk/study. As applications received will be considered on a rolling basis, applicants are advised to submit their applications as early as possible. Info Day Enquiries Hotline: (852) 2333 0600 Info Day Enquiries E-mail: asevents.enquiry@polyu.edu.hk


Our website has recently undergone migration. Please click here for the archive of press releases issued in 2002 – 2018.