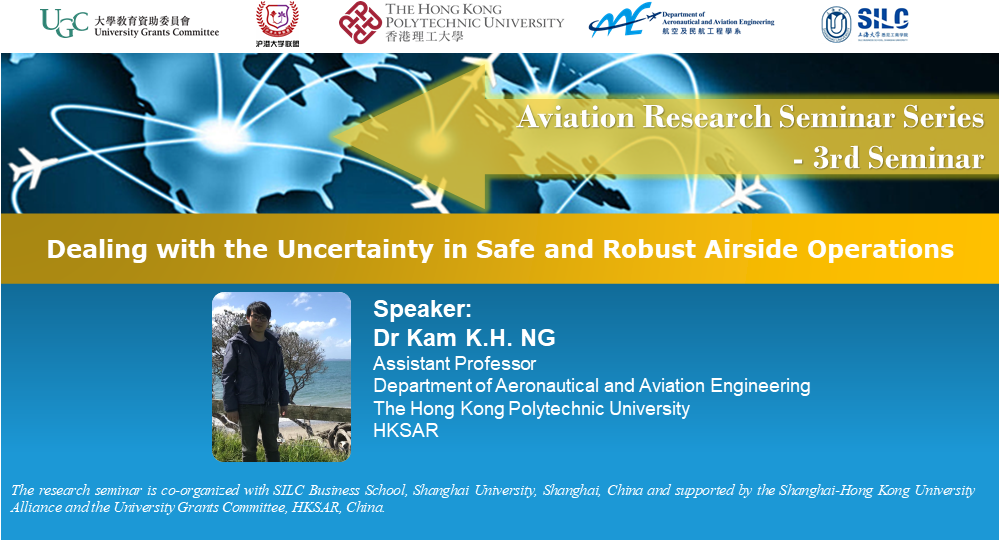 All are welcome! No registration is required.

This research considers the problem of decision-making in the terminal manoeuvring area during the uncertain arrival times at entry waypoints of flights and investigates the air traffic controller specific parameters in the model. The problem is formulated in a two-stage optimisation framework and the proposed methods further enhance the quality of Pareto-optimality Benders-dual cutting plane based on core point approximation in the second stage optimisation problem. In addition, the model could determine the estimated average delay time at runways with different settings of additional buffer for longitudinal separation requirement and trade-off parameters between the estimated average delay time at runways and estimated penalty cost of cruise speed adjustment. The numerical results show that the proposed scheme outperforms the well-known Pareto-optimal cuts in Benders-dual method from the literature.

Dr Kam K.H. NG (Researcher ID: L-7278-2019; ORCID: 0000-0002-4959-0502) is currently an Assistant Professor in the Department of Aeronautical and Aviation Engineering (AAE), at The Hong Kong Polytechnic University (PolyU), HKSAR. Before joining AAE, he was a Research Fellow in the School of Electrical and Electronic Engineering, Design and Human Factors Laboratory, the School of Mechanical and Aerospace Engineering, Nanyang Technological University, Singapore. He received the first-class honours, BSc Degree (Hons) and PhD Degree in Department of Industrial and Systems Engineering, The Hong Kong Polytechnic University, Hong Kong SAR, China, in 2015 and 2019 respectively. During his service in PolyU AAE, he has successfully secured several research projects grants with the total of approximately HK $10,500,000.00 (external fund), HK $50,000.00 (internal fund); and teaching and education grants with a total of approximately $450,000.00, as Principal Investigator (PI).