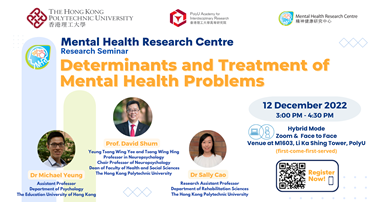 There is no health without mental health.  What have researchers discovered about the risk factors and effective interventions for mental health problems?  How can we safeguard our mental health during the pandemic?   You are cordially invited to join the Research Seminar titled “Determinants and Treatment of Mental Health Problems” organised by the Mental Health Research Centre (MHRC) on 12 December 2022 (Monday) at 3:00pm.  MHRC researchers will present their latest findings about the risk and predictive factors of psychological trauma; neurofeedback training; and social cognition.  Online or onsite participation are welcomed!   For registration and more info: https://www.polyu.edu.hk/mhrc/news-and-events/event/2022/july-dec-2022/dec-12-prof-david-shum/ 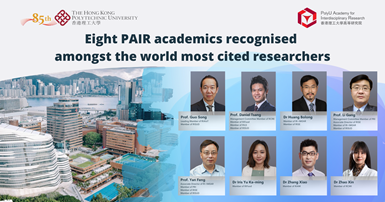 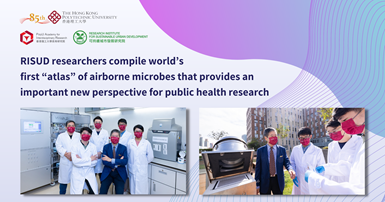 The Earth’s surface is teeming with microorganisms but we know little about the microbial population in the air that surrounds us. After nearly a decade of effort, a PolyU-led team has compiled a comprehensive map of the world’s airborne microbes, providing fresh insights into how these species interact with the surface environment – as well as their likely future changes. In collaboration with researchers from the mainland and the US, the research team led by Prof. Li Xiang-dong, Director of Research Institute for Sustainable Urban Development (RISUD), spent around one year sampling airborne microbes across the world, from ground level to mountaintops. Combining their own results with the most accurate global data collected in past studies, they compiled the first-ever atlas of the global airborne microbiome, providing an important new perspective for public health research. The atlas provides a wealth of insights into the microbial communities floating above the ground. Air is a unique harbour of bacterial life. Genetic analysis by the team showed that the core communities in air – the handful of keystone species that form an outsized proportion of the microbe population – were not the same in the air as those in marine or soil ecosystems. In fact, even though the air is a free-flowing medium with seemingly no internal boundaries, these core bacterial communities are distinctly localised and stable. The research team analysed the bacterial communities of 370 individual air particulate samples collected from 63 sites around the world, ranging from those at ground level (1.5 – 2 m high) to rooftops (5 – 25 m high) and high mountains (5,238 m asl), as well as from densely populated urban centres to the uninhabited Arctic Circle, for a more diverse coverage in terms of altitudes and geographic regions. Prof. Li Xiang-dong, Chair Professor of Environmental Science and Technology, Director of Research Institute for Sustainable Urban Development and Dean of Faculty of Construction and Environment of PolyU, leader of the research team, said, “We have verified that human activities have certainly changed the structure of microbiomes in the natural ambient air, particularly with a higher abundance of pathogenic bacteria in urban air. After three years of the pandemic, people are now paying more attention to this invisible but influential microbial community. The research outcomes could serve as a critical reference for predicting the response of planetary microbiome to future environmental changes, as well as the health impacts of inhalable microbiomes.” The researchers estimated that the total number of microbes in the sea or soil is thousands of times larger than those in the air. Nonetheless, the diversity of microbes – known as “richness” – is just as high, suggesting that surface habitats directly contribute to microbes in the air. Overturning previous assumptions, vegetation is not the main terrestrial source of airborne bacteria, and the Earth’s vast tracts of soil provide very small fraction. The crashing of ocean waves, the shaking of leaves, and even frequent activities and constant respiration of animals and humans are bigger drivers of bacterial exchange between the surface and the air. From a macroscopic perspective, living things, especially animals and plants, are most diverse in equatorial regions such as warm and humid rainforests, and its diversity decreases in regions closer to the poles. For microbes, the situation is more interesting – microbial diversity is highest in at mid-latitudes and decreases away from the equator. This pattern was well established for terrestrial and aquatic microorganisms, but the new atlas confirms that the same pattern applies to the airborne microbiome. The authors speculated that the concentration of diversity at the mid-latitudes is caused by stronger sources of microbial input. Overall, the researchers estimated that half of airborne bacteria originate from ground sources. Urban air has especially high levels of human-associated bacteria – some harmless, some pathogenic. Direct transmission of germs from human breaths to air is not the only impact that humans have on the airborne microbial world. Large-scale activities such as industrialisation and urbanisation have disrupted natural environments and affected air quality. This impairs the environmental filtering of microbial structures, making the composition of airborne bacteria more susceptible to random processes – although weather still plays an important role. The close relationship between modern human activities and the microbes around us underscores the need to predict future changes accurately. The inhalable infectious bacteria that proliferate in cities are of particular concern considering the rapid urbanisation and our growing understanding of airborne contagion from COVID-19 research. Climate change is another driver of the growth of airborne microbes, given that the atlas revealed the marked effect of temperature on microbial abundance. Hence, the study provides an invaluable resource and an important new perspective for future public health research. The PolyU team collaborated with Prof. James M. Tiedje, University Distinguished Professor at Michigan State University and scientists from mainland China in the study. The findings were published in the Proceedings of the National Academy of Sciences  (https://www.pnas.org/doi/full/10.1073/pnas.2204465119), a peer-reviewed journal of the USA National Academy of Sciences.

PAIR cordially invites you to our Distinguished Lecture on 6 December 2022 (Tuesday) at 5:00-6:30pm (HKT) on Zoom. The online lecture "Experimenting Higher Education Reform at Westlake University” will be delivered by Prof. Shi Yigong, President of Westlake University in China.  Prof. Shi will reflect on the challenges in global higher education, based on his 37 years of learning, scientific research, and teaching experience in academia.  He will present Westlake University's educational reforms in university operations, governance, talent recruitment, student development, research and academic evaluation, and interdisciplinary studies, which altogether provide new opportunities for future-oriented higher education.  Don’t miss the chance to learn from distinguished scholar!   Find out more and register at: https://www.polyu.edu.hk/pair/news-and-events/events/2022/12/20221206-pair-distinguished-lecture---prof-yigong-shi/?sc_lang=en 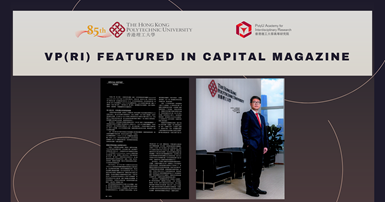 Prof. Christopher Chao, Vice President (Research and Innovation) of PolyU and Director of Policy Research Centre for Innovation and Technology (PReCIT), was interviewed for a special report on innovation and technology (I&T) in the 35th anniversary issue of the Capital Magazine.  Prof. Chao shared PolyU’s endeavours to support I&T development and interdisciplinary research collaboration.  He mentioned that the increasingly complex social challenges cannot be solved with traditional discipline-specific research.  To facilitate the formulation of comprehensive solutions, PolyU established the PolyU Academy for Interdisciplinary Research (PAIR) last year to promote cutting-edge interdisciplinary research, bring together the wisdom of experts from diverse fields, and forge new research areas and outputs.  He also believed that Hong Kong has top research talents whilst the Greater Bay Area (GBA) has a huge market for enterprises to launch research products for commercialisation with policy support from the central government.  He is optimistic about I&T development in Hong Kong and the GBA and encourage academia as well as industry to join hands to promote research commercialisation and entrepreneurship, for building an international I&T hub together.   Read more: Hong Kong and the Greater Bay Area Co-develop Innovation and Technology with Optimistic Prospects | Policy Research Centre for Innovation and Technology (polyu.edu.hk) 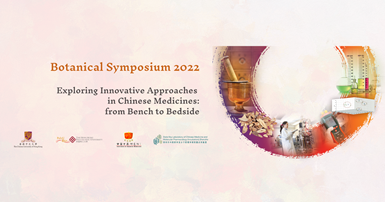 Co-organised by the State Key Laboratory of Chinese Medicine and Molecular Pharmacology (Incubation) of The Hong Kong Polytechnic University (PolyU) and the State Key Laboratory of Research on Bioactivities and Clinical Applications of Medicinal Plants of The Chinese University of Hong Kong (CUHK), and supported by the Research Centre for Chinese Medicine Innovation (RCMI) of PolyU, the “Botanical Symposium 2022: Exploring Innovative Approaches in Chinese Medicines – From Bench to Bedside” will engage eminent researchers for fruitful exchange on a wide range of topics in traditional Chinese medicine (TCM), from natural product development and safety to scientific and clinical approaches to TCM. Register today to secure your seat at the Botanical Symposium and join us on 1 December 2022!   For registration and more info: https://event.fourwaves.com/botanicalsymposium2022/pages

The Gerontech and Innovation Expo cum Summit 2022 was successfully held, attracting thousands of visitors. At the four-day expo, the exhibition booth of the Research Institute for Smart Ageing (RISA) showcased the latest innovations by PolyU faculty members from the Department of Applied Social Sciences, the Department of Biomedical Engineering, the School of Nursing, and the Jockey Club Design Institute for Social Innovation, and demonstrated advanced technologies for elder care to the public. The booth was visited by prestigious guests, including Mrs Carrie Lam, former Chief Executive of the HKSAR, and Prof. Sophia Chan, former Secretary for Food and Health of the HKSAR, academic staff from different higher education institutions, and the general public who were interested in using PolyU’s aged care products. We wish this precious experience can bring new collaboration opportunities to RISA. 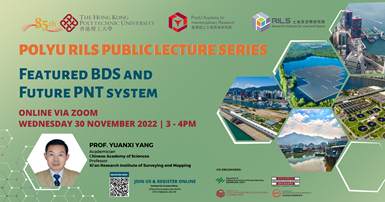 The Research Institute for Land and Space is organising an online Public Lecture on “Featured BDS and Future PNT System” on 30 November 2022 (Wed). Prof. Yang Yuanxi, Academician of Chinese Academy of Sciences and Professor of Xian Research Institute of Surveying, will be the keynote speaker. All are welcome.  Don’t miss the chance to learn more! Discover more: https://polyu.hk/hhZTv Register at: https://polyu.hk/sAwMs 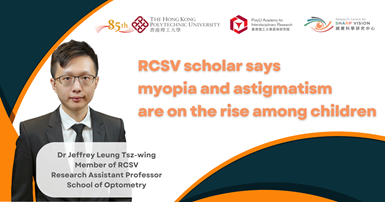 Dr Jeffrey Leung Tsz-wing, Member of the Research Centre for SHARP Vision (RCSV) and Research Assistant Professor in the School of Optometry, said in an interview with HK01 earlier that myopia and astigmatism are on the rise among schoolchildren during the pandemic. To better protect children’s eyes, Dr Leung suggested parents encourage their children to practise the 20-20-20 rule, that is, to look at something 20 feet away for 20 seconds, for every 20 minutes of screen time. Online coverage: HK01 - https://polyu.me/3NwDXOL 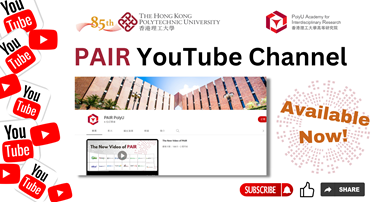