PolyU scholars, together with global academic teams, unveiled a joint research study on major scientific discoveries related to airborne bacteria. This is a huge genetic sequencing task undertaken on airborne microbiomes, bringing an overview of bacteria in the global air for the first time.

The research teams analysed the bacterial communities of air particulate samples collected worldwide and established a comprehensive atlas of global airborne bacteria. The research revealed that half of airborne bacteria originate from surrounding environments and are mainly influenced by local meteorological and air quality conditions. Particularly in urban areas, one feature of airborne bacteria is that an increasing proportion consists of potential pathogens from human-related sources. This in-depth atlas of airborne bacteria shows implications for microbiology, ecology, air pollution, and public health, contributing to a better understanding of the invisible microbial world on Earth.

Implications for Public Health
The rapid spread of COVID-19 around the world in recent years has drawn public attention to the role of air in the transmission of microbiomes, including viruses and pathogens. In terms of public health, the research results indicated anthropogenic impacts on airborne bacteria, particularly major pathogens, and the potential of airborne microbiomes to affect human health through inhalation. The study showed the key fact that humans and animals are also sources of airborne bacterial communities.

Microbes never live alone. Thus, understanding the interactions of planetary microbiomes and their ecological and health consequences requires in-depth knowledge of bacterial communities in the atmosphere which is an important medium of transmission but the most untouched microbial habitat on Earth. The research defined the aerial microbial world and its origins in a changing climate, and subsequently, this contributed to predicting planetary microbiome responses and the health impacts of inhalable microbiomes with future changes in the environment. This PolyU research team’s joint global expedition was published in the Proceedings of the National Academy of Sciences, USA (PNAS), a peer-reviewed journal of the USA National Academy of Sciences.

The research was led by Prof Xiang-dong Li, PolyU’s Chair Professor of Environmental Science and Technology and Dean of Faculty of Construction and Environment, collaborated with Prof James M. Tiedje, University Distinguished Professor at Michigan State University, and involved with scientists from mainland China. Significantly, the study showed the importance of air in facilitating the exchange of earth microbiomes, and this provided a theoretical basis for predicting dynamic variations of airborne bacteria in relationship to environmental changes, air pollution, and other human activities at regional and global levels.

Extensive Scope with Impactful Findings
This research project stretched for nearly nine years. The team analysed the bacterial communities of 370 individual air particulate samples collected from 63 sites around the world, ranging from those on ground level (1.5 - 2 m high) to rooftops (5 – 25 m high) and high mountains (5238 m asl), as well as from densely populated urban centers to the Arctic Circle, for a more diverse coverage in terms of altitudes and geographic regions.

An airborne bacterial reference catalogue was also successfully constructed, containing more than 27 million nonredundant 16S ribosomal RNA (rRNA) gene sequences. Significantly, the research found that half of the airborne bacteria originate from the surrounding environments and are mainly influenced by local meteorological and air quality conditions.

Far-reaching Influences
Air plays an important role in the Earth’s microbial world for being a huge habitat harbouring abundant and diverse microbiomes and a medium for the transmission of surface microorganisms on Earth by interacting with different microbiomes. Frequent activities and constant respiration from humans and animals greatly increase their contact with air. As the study found that the dominant source of airborne bacteria is from human- and animal-associated habitats, revealing a situation ignored in previous emission modelling studies.

Also, airborne bacteria are key components of bioaerosols, which play a vital role in channelling the transmission of microbes across the atmosphere, biosphere, and anthroposphere on Earth’s surface. In terms of air quality, the study highlighted the importance of bioaerosols to the dissemination of microbes, their processes, and influences on plant, animal, and human health. 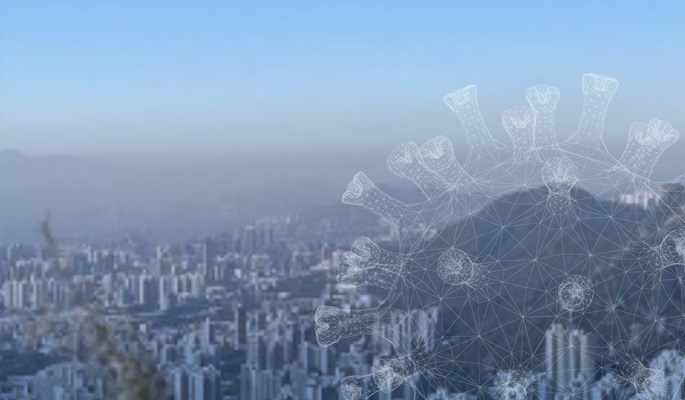