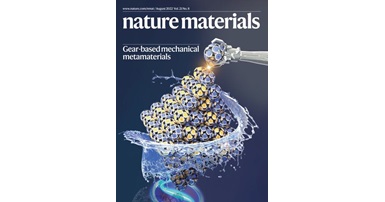 ME research reported in Nature Material and National Science Review

The research group, led by Chair Prof. L. Cheng in ME, has made good progress in the development of acoustic/elastic/mechanical metamaterials. Recent research results are published in prestigious journals like Nature Materials, National Science Review, Journal of Mechanics of physics and Solids, Acta Materialia and Physics Review applied etc. Their latest work on programmable gear-based mechanical metamaterials was published in the latest issue of Nature Materials (21, 869-876, 2022, IF 47.656) as cover story. The new design leads to unprecedented tunability and programmability based on gear clusters embracing traditional Chinese Taiji pattern. The work was also reported by Nature (606, 2022) as research highlight, which states “Sheets of connected gears made from various materials can morph from soft and deformable to extremely stiff, all while bearing heavy loads … Such clusters of gears could be a way to make machine parts that have controllable elasticity but are still strong. For example, robots with appendages that soften and stiffen on demand would be able to jump and grab objects easily”. The paper was the fruit of the research work of Dr Fang Xin, Hong Kong scholar in ME under the supervision of Prof. Cheng, in collaboration with National University of Defense Technology and Fraunhofer for Mechanics of Materials, Germany. Meanwhile, significant progress has been made on the topological design of metasurface for acoustic and elastic wave manipulation. In particular, the group proposed a systematic inverse design paradigm, which leads to a new class of metasurfaces allowing for various exotic wave functionalities (steering, focusing, levitation). They reported the combined effects of topology-specific internal resonances, bi-anisotropic and multiple scattering, which lead to record-breaking broadband and achromatic material properties. The work was online published in National Science Review (IF 23.178) with Dr. Dong Haowen as the leading author, who is another Hong Kong scholar working with Prof. Cheng (2019-2020). Other related works on broadband pentamode metamaterials and elastic waves have also been published in prestigious journals like Journal of Mechanics of physics and Solids 2020, 2021), Acta Materialia (2019) and Physical Review Applied (2022). 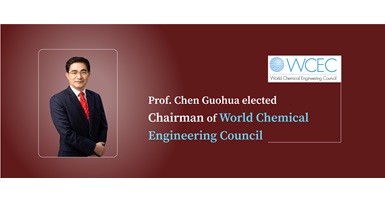 Prof. Chen Guohua, Otto Poon Charitable Foundation Professor in Smart and Sustainable Energy, Chair Professor of Energy Conversion and Storage, has been elected the Chairman of the World Chemical Engineering Council (WCEC) in recognition of his distinguished achievements in serving the Council with top quality engineering expertise. Prof. Chen has been the Vice Chairman of WCEC since 2017. WCEC is the international organization coordinating the academic exchanges among chemical engineers world-wide. It is composed of representatives of the World's leading Chemical Engineering Societies from countries including China, USA, Japan, Australia, Canada, UK, France, Brazil, Germany, Spain, Italy, South Africa, and regional confederations including Asian-Pacific Confederation of Chemical Engineering, European Federation of Chemical Engineering, Inter-American Confederation of Chemical Engineering. Professor Guohua Chen is an outstanding chemical engineer, a renowned expert in electrochemical technologies for sustainable development, a highly successful mentor and university administrator. He leads the commercialization of proprietary technologies for energy storage applications, with world leading performance. He has published over 300 journal papers with very top academic impact. He is an assiduous advocate for global collaboration, serving on a number of international councils and editing for prestigious journals, including CanJChE, CJChE, SEPPUR and PSEP. He is a fellow of AIChE and HKIE, respectively. He works enthusiastically in increasing chemical engineering impact globally. Learn more about World Chemical Engineering Council. 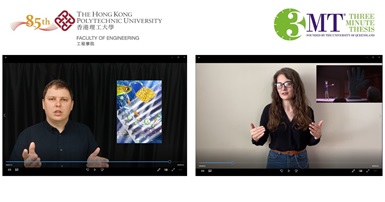 Terrific! Two research students representing the Department of Mechanical Engineering (ME) won the Champion, First Runner-up and People’s Choice Award in the Three Minute Thesis (3MT) Competition 2022 organized by the PolyU Faculty of Engineering. 3MT® celebrates the exciting research conducted by research postgraduate students. Developed by the University of Queensland, Australia, the competition cultivates students’ academic presentation and research communication skills, and supports their capacity to effectively explain their research and its significance in three minutes, in a language appropriate to non-specialist audiences. 3MT® is now a globally recognized competition that has been held in over 900 universities across more than 80 countries worldwide. On 30 June 2022, the PolyU Faculty of Engineering held the 3MT Competition. Seven affiliated departments nominated their research students to participate in it. The participants each delivered a high-impact brief presentation within 3-minute. Most of them demonstrated good academic pitching skills. A panel of judges by representatives from the seven affiliated departments was formed and selected the best presenters. Winners of the 3MT Competition 2022 Champion: ECCEL VELLWOCK Andre Department of Mechanical Engineering  First Runner-up: LABAZANOVA Luiza Department of Mechanical Engineering Second Runner-up: LYU Cheng Department of Electrical Engineering  People’s Choice Award: (by audience ballot)  ECCEL VELLWOCK Andre Department of Mechanical Engineering We are very proud of the outstanding performance by the PolyU ME PhD students, ECCEL VELLWOCK Andre and LABAZANOVA Luiza, stood out from the rest, triumphed in the competition.  Andre is currently a PhD student in ME under the supervision of Dr Yao Haimin. “Anything fishy?” is the title about his research project for this competition. Luiza is a PhD in ME supervised by Dr Navarro-Alarcon David. The title about her research project is “Self-Reconfigurable Soft-Rigid Robots with Variable Morphology”. Professor Chen Guohua elected into the Canadian Academy of Engineering

Prof. Chen Guohua, Otto Poon Charitable Foundation Professor in Smart and Sustainable Energy, Chair Professor of Energy Conversion and Storage, has been inducted into the Canadian Academy of Engineering (CAE). The announcement was made by President Yves Beauchamp of the CAE at its Annual General Meeting on June 13, 2022. Prof. Chen is among 54 new Fellows elected into the academy this year. Election to the Canadian Academy of Engineering is one of the highest honours in engineering. Fellows of the CAE are nominated and elected by their peers, in view of their distinguished achievements and career-long service to the engineering profession. Chen’s CAE citation reads: “Professor Guohua Chen is an outstanding chemical engineer, a renowned expert in electrochemical technologies for sustainable development, a highly successful mentor and university administrator. He leads the commercialization of proprietary technologies for energy storage applications, with world leading performance. He has published over 300 journal papers with very top academic impact. He is an assiduous advocate for global collaboration, serving on a number of international councils and editing for prestigious journals, including CanJChE, CJChE, SEPPUR and PSEP. He is a fellow of AIChE and HKIE, respectively. He works enthusiastically in increasing chemical engineering impact globally.” The Canadian Academy of Engineering – Media Release: Learn more 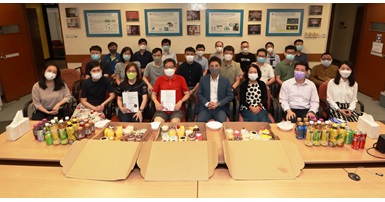 Colleagues of the PolyU Department of Mechanical Engineering (ME) have always been devoting themselves to the development of ME. This year, the Department Head Prof. Su Zhongqing, on behalf of the University, paid tribute to long-serving staff members for their loyal and committed service over the years. Congratulations to the awardees and heartfelt thanks for their years of dedication and devotion which have marked the achievements of the Department. Long Service Award 2021 Award Recipients Length of Service  Name    Post Title 15 years  Prof. Fu Mingwang  傅銘旺  Associate Director of Research Institute for     Advanced Manufacturing, Professor 20 years  Ir Elsa Tang  鄧慧芳  Senior Instructor 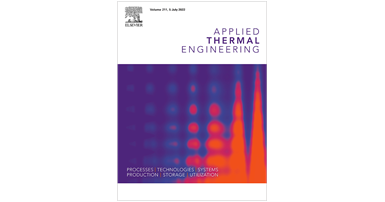 Dr An Liang, Associate Professor of PolyU Department of Mechanical Engineering, has been appointed as Subject Editor by the Editor-in-Chief of Applied Thermal Engineering, Elsevier, which is a peer-reviewed academic journal with an impact factor of 5.295 and rankings of 6/60 in “Thermodynamics” Subject Category and 13/135 in “Mechanics” Subject Category in 2020 JCR Science Edition. Applied Thermal Engineering disseminates novel research related to the design, development and demonstration of components, devices, equipment, technologies, systems and, in general, solutions involving thermal processes for the production, storage, utilization and conservation of energy, with a focus on engineering application. It is noted that papers concerned with the development and/or characterization of materials are only within scope if they include content relating to the implications of the employment of these materials in engineering applications, e.g., by considering their operation and/or performance within components, devices, equipment, technologies and/or wider thermal systems. For more information, please refer to https://www.journals.elsevier.com/applied-thermal-engineering. On April 28, 2022, the world's first list of High Potential AI Chinese Young Scholars released by Baidu was officially announced. Dr Sun Yuxiang, a young scholar from the Department of Mechanical Engineering, The Hong Kong Polytechnic University, was included into the list (in the field of AI+X, a total of 50 young scholars from all over the world were selected)! The selection is based on 186,963 papers and the information of 89,324 scholars from all over the world. By using big data mining technology with three metrics (academic performance, academic influence and academic potential index), 100 high-potential young scholars were selected from the classical fields of AI (Machine Learning, Data Mining, Computer Vision and Natural Language Processing), and 50 high-potential young scholars were selected from the interdisciplinary fields of AI (AI+X). The 150 young scholars have made outstanding contributions in the fields of AI. Their research focuses on cutting-edge hot topics in academic and industry, such as autonomous driving, quantum computing, dialogue systems, and biological computing, etc. According to reports, the 150 AI Chinese Young Scholars are from 98 top universities or institutions around the world. The top 10 universities or institutions with the most selected young scholars are Tsinghua University (8 scholars), Google (8 scholars), Chinese Academy of Sciences (7 scholars), Microsoft (including Microsoft Research Asia, 7 scholars), University of Hong Kong (4 scholars), Shanghai Jiao Tong University (3 scholars), Carnegie Mellon University (3 scholars), University of California San Diego (3 scholars), Columbia University (3 scholars), Facebook (3 scholars). The selection of the AI Chinese Young Scholars aims to encourage young scholars in the fields of artificial intelligence to make more influential achievements, and to identify high-potential and high-influential Chinese young technical leaders. Dr Sun joined the Department of Mechanical Engineering, The Hong Kong Polytechnic University in 2020. His is now leading a research lab with 1 Postdoctoral research fellow, 7 PhD students, and 2 Master students. One PhD student successfully won the highly-competitive Hong Kong PhD Fellowship Scheme (HKPFS) award in the 2021/2022 academic year. Dr Sun currently serves as an associate editor of the top-tier robotics journal and conferences: IEEE Robotics and Automation Letters (RA-L), IEEE International Conference on Robotics and Automation (ICRA), and IEEE/RSJ International Conference on Intelligent Robots and Systems (IROS).   References: https://mp.weixin.qq.com/s/eNcKhmhJaZ20t-0P_yusJA https://xueshu.baidu.com/usercenter/index/aischolar2022