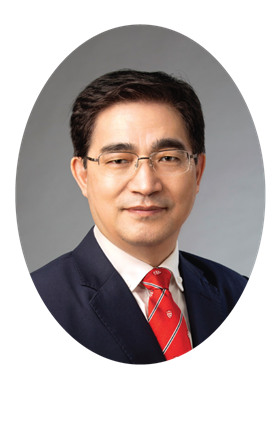 Professor Chen has served in many professional societies and editorial boards of key international journals. Apart from serving as the Chairman, Chemical Discipline for the Hong Kong Institution of Engineers during 2009 and 2012, he is the President of the Asian Pacific Confederation of Chemical Engineering, Editor of Separation and Purification Technology since 2006, Associate Editor of the Chinese Journal of Chemical Engineering, subject editor of Process Safety and Environmental Protection, and the editorial board member of Journal of Electrochemistry, Drying Technology-An International Journal, Environmental Technology Reviews, etc. He is an Adjunct Professor of DUT and Changjiang Scholar (Chair), Ministry of Education in China.

Professor Chen’s recent research interests include electrochemical technologies for energy and environmental applications. He has published over 235 journal papers with more than 18,000 Google citations and an H-index of 66. Professor Chen edited 3 books, and was granted three US patents and four China patents. In relation to his research achievements, Professor Chen received the Certificate of Excellence from the World Forum of Crystallization, Filtration and Drying in 2007 and the inaugural Research Excellence Award from the School of Engineering of HKUST in 2011. He was elected as a Fellow of Hong Kong Institute of Engineers, and Fellow of American Institute of Chemical Engineers.

For lithium (sodium)-sulfur batteries investigation, it will involve

Theoretical study of the materials based first principles analysis and density function theory calculation will also be employed for the materials screening and redox mechanism understanding.

Energy is one of the most challenging problems for mankind today. Renewable energy is the future, and energy storage is very important for effective renewable energy utilization because of the mismatch between supply and demand. Lithium ion batteries (LIBs) offer a highly promising energy storage system for power grid load leveling and the transportation of power supplies. The properties of the electrode particles significantly affect the performance of LIBs. To enhance the electrical or ionic conductivity, service life, and/or rate performance of the electrodes, a conductive polymer coating has proven effective. Although thickness control and conformality are very important factors for the effective coating of such polymers, conventional coating is conducted either in a liquid or solid phase, leading to non-uniform coating or aggregate formation on the electrode particles.

Oxidative chemical vapor deposition (oCVD) of polymeric materials has been shown to be a “green” process as it can produce a conformal polymer layer on small particles without the involvement of solvents. The desired morphology and thickness can be achieved by changing operating conditions such as the temperature, pressure, type of initiator, rate of particle agitation, and coating time.

In this proposed work, the oCVD method will be employed to coat three common types of conductive polymers on solid particles typically utilized in LIB production. Specifically, PEDOT, PPy, and PAni will be coated onto lithium nickel cobalt manganese oxide, a cathode material used in high-capacity LIBs. Operating conditions such as the substrate temperature, vacuum of the reactor, initiator, and monomer will be investigated to identify coating conditions for the optimal electrochemical performance of the batteries, mainly in terms of rate performance, coulombic efficiency, and service life.

The reasons behind the enhanced performance of the coated materials will be found by comparing the effects of coating type and composition. The success of the project will have an important effect on the production of durable LIBs for power supply and energy storage applications.

Project Objectives: In this project, constructions and fabrications of lithium ion conductor-modified S/hetero-atom(s) doped carbons (S/HCs@LIC) cathode materials and electrodes with lithium ion and electron transmission enhancement and anchoring of polysulfides are proposed to improve the rate performance and cycling stability of Li-S batteries. Specifically, the project objectives are:

c) Top twenty most SCI cited papers (as of February 2017)