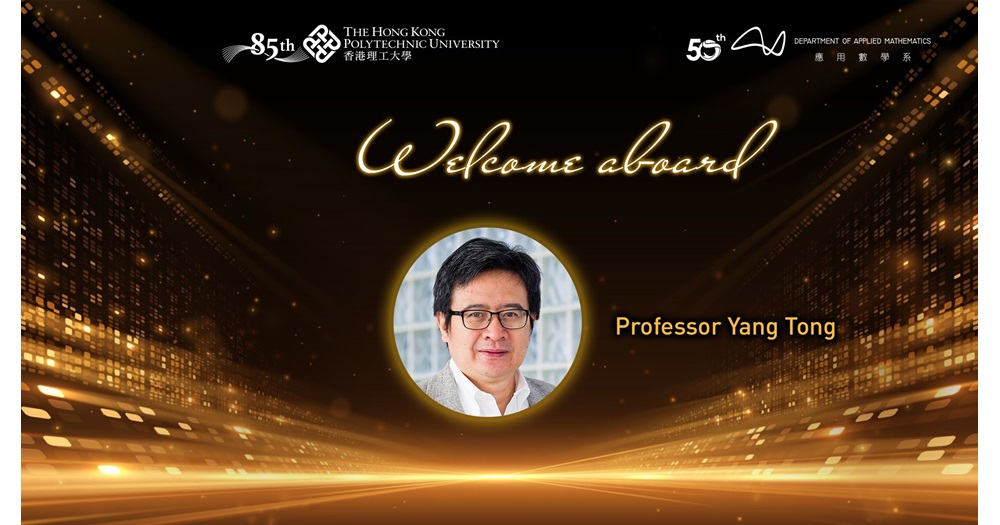 We would like to extend a warm welcome to our Chair Professor of Mathematical Science, Professor Yang Tong joining AMA family today (November 15, 2022).

Professor Yang obtained his BSc and MSc degrees from Zhongshan University (Sun Yat-sen University) in 1987 and 1990 respectively.  He furthered his studies at the University of California, Davis where he obtained his PhD in 1993.  After one year of postdoctoral fellowship at the Institute for Advanced Study in Princeton, he joined the City University of Hong Kong (CityU) in 1994 as Lecturer/Assistant Professor and was promoted to Chair Professor of Mathematics in 2007.  He was Head of Department of Mathematics from 2012 to 2018 and Associate Dean of College of Science and Engineering from 2007 to 2011 at CityU.

The awards and honours that Professor Yang has received include the inaugural RGC Senior Research Fellow Scheme in 2020, first prize of the Outstanding Scientific Research Output Award (Science and Technology) by Ministry of Education Higher Education of China in 2019, The President’s Award  from CityU in 2015 and 2016, State Natural Science Award of China (2nd class) in 2012, the Croucher Senior Research Fellowship in 2011, Grand Award of Research Excellence Awards  from CityU in 2009, the Changjiang Chair Professorship by the Ministry of Education of China in 2005, the National Science Fund for Distinguished Young Scholars in 2004, and the Morningside Silver Medal of Mathematics at the first International Congress of Chinese Mathematicians in 1998.

Professor Yang has been working in the fields of partial differential equations and kinetic theory.  He has made contributions to the L1 stability of BV solutions to hyperbolic conservation laws by proposing the Liu-Yang functional, the fluid dynamic phenomena in kinetic models, the boundary layer theories and high Reynolds number limit.  He authored over 200 papers in refereed journals and has been the PI of 27 GRF/CERG and one NSFC/RGC Joint Research Scheme since 1994.  He served as one of the Editors-in-Chief of Analysis and Applications from 2013 to 2017, and is one of the founding Editors-in-Chief of Kinetic and Related Models launched in 2008, and Communications in Mathematical Analysis and Applications launched in 2022.  He is now serving in the editorial board of several international journals including the Bulletin and Journal of London Mathematical Society, SIAM Journal on Mathematical Analysis, and Chinese Annals of Mathematics, Series B.