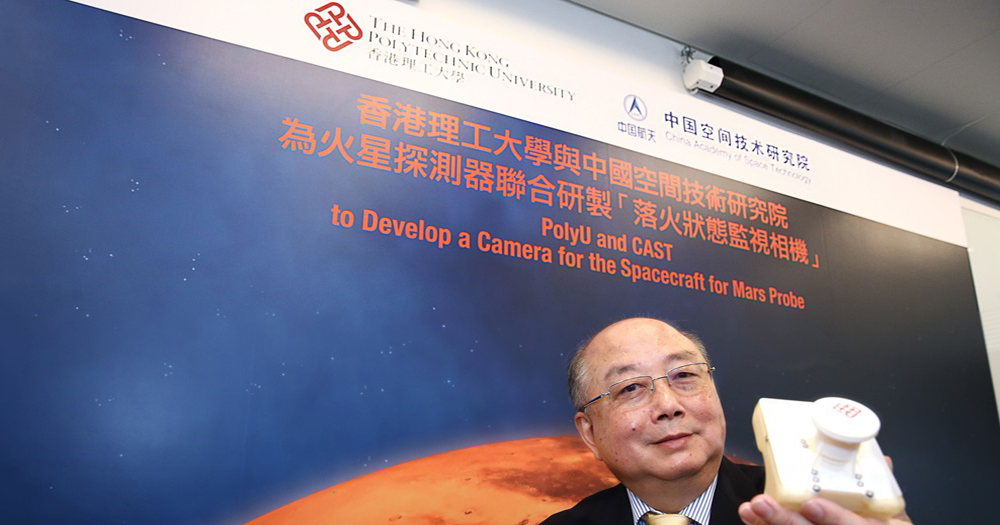 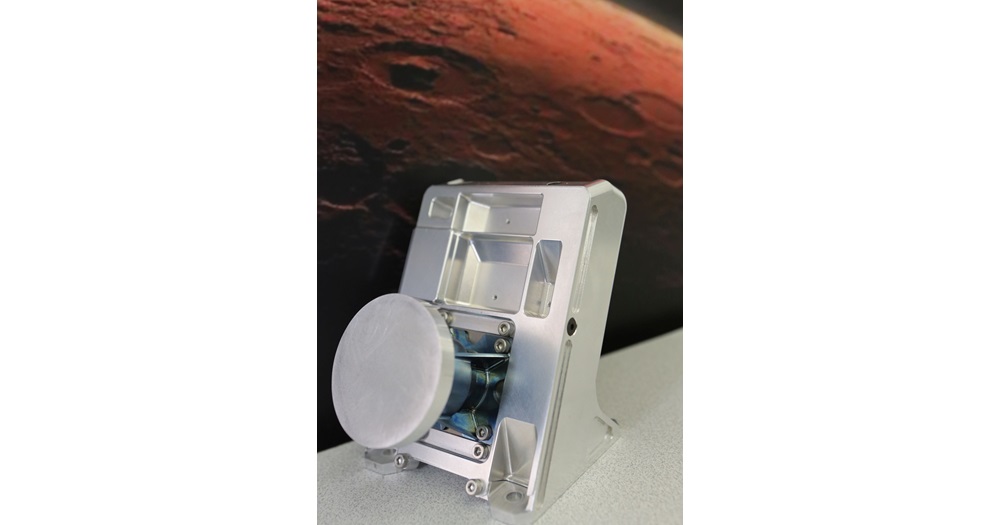 The propotype of the Mars Landing Surveillance Camera.

The Hong Kong Polytechnic University (PolyU) has successfully developed and manufactured the “Mars Landing Surveillance Camera” (“Mars Camera”), one of the key instruments onboard the Mars spacecraft, to participate in the Nation’s first Mars mission Tianwen-1, which was launched today.

The spacecraft for the Mars probe comprises an orbiter, a lander and a rover, aiming to complete orbiting, landing and roving in one single mission, an unprecedented attempt globally, as well as to obtain scientific exploration data on the Red Planet. Located on the outside top surface of the Mars lander platform, the Mars Camera will monitor the landing status, the surrounding environment and movements of the rover with respect to the unfolding and status of the solar panels and antennae. The information is critical for the successful movement of the Mars Rover onto the Mars surface.

Professor Jin-Guang TENG, President of PolyU, said, “We are deeply honoured to have taken part in and contributed to the Nation’s historic Mars mission. The delivery of the Mars Camera has again proved the creativity, capability and credibility of PolyU’s researchers in developing and manufacturing homegrown space instruments that meet the stringent requirements of space exploration. As the only tertiary education institution in Hong Kong with experience in international space missions, PolyU looks forward to contributing to more national deep space exploration projects in the future.”

The Mars Camera is light in weight (around 390g) yet strong and durable enough to withstand the extreme temperature differences of about 150 degrees Celsius experienced during the nine-month journey between Earth and Mars, followed by operation under the extremely low temperatures on the Mars surface. As this Mars Camera is designed for the lander, it has also to withstand huge impact shock of 6,200G (i.e. 6,200 times the force of Earth’s gravity). Despite having a wide-angle field of view (a maximum of 120 degrees horizontally and a maximum of 120 degrees vertically), the Mars Camera has low image distortion.

Despite having a wealth of experience in developing state-of-the-art space tools, Professor YUNG found the Mars Camera project a challenging one. He said, “To capture ultra-wide angle images on Mars for scientific research, the Mars Camera has to have a wide field of vision with low distortion optics within the little allowable payload, but at the same time be able to withstand extreme temperature variation, mechanical impact and vibration within the little available mass. What’s more, high reliability is required under the extreme space travel environment.” Thanks to their dedication and perseverance, as well as the support of the University, the team successfully completed and delivered the Mars Camera with the corresponding space qualification experiments in less than three years.

PolyU has been actively participating in other space exploration projects, designing and manufacturing a number of sophisticated space tools in the past decade. These include the “Mars Rock Corer” for the European Space Agency’s 2003 Mars Express Mission and the “Soil Preparation System” for the Sino-Russian Space Mission in 2011.

Being the only tertiary institution in Hong Kong that possesses international space qualification experiences, PolyU has been contributing to the Nation’s space projects since 2010. As part of the Nation’s lunar exploration programme, Professor YUNG collaborated with the China Academy of Space Technology to develop a “Camera Pointing System” for Chang’e 3 in 2013 and Chang’e 4 for the historic landing on lunar far side in 2019. A PolyU research team is collaborating with the China Academy of Space Technology again to develop a “Surface Sampling and Packing System” for the Chang’e 5 and Chang’e 6 missions. Chang’e 5 will be launched later this year to collect samples from the surface of the moon.