Damage detection for train axles based on quasi-surface waves

An Ultra-low-frequency, Broadband and Multi-stable Tri-hybrid Energy Harvester for Enabling the Next Generation Sustainable Power

Invited by Changchun Railway Vehicles Co. Ltd., a subsidiary of China Railway Rolling-Stock Corporation, a team from the National Rail Transit Electrification and Automation Engineering Technology Research Centre (Hong Kong Branch) at The Hong Kong Polytechnic University (PolyU) was commissioned to scrutinise the operation performance of the metro trains before the official launch of Olympic line at Rio de Janeiro.

The research team made use of the PolyU-developed optical fibre sensing technology to conduct a comprehensive monitoring on the dynamic performance of the critical components (such as acceleration, strain and temperature) of motor and trailer cars, covering bogie, axle box, lifting plate, gear box, antenna beam and traction. The team also conducted a 4-day on-board monitoring for a cumulative mileage of 500 km, in accordance with industry standards. Prof. Ni Yiqing, Hong Kong Branch Director, said “the analysis results showed that the metro trains operated in satisfactory and healthy conditions which are critical for safety and stability of movement of the trains, even when travelling at full speed.”

When completed in 2010, the Guangzhou New TV Tower (GNTVT) will be the world's tallest TV tower with a total height of 610 m. It consists of a main tower (454 m) and an antennary mast (156 m). The GNTVT is operated in 2010 to broadcast the 16th Asian Games, which was held in Guangzhou from November 12 to 27, 2010. It has been used for office space and for entertainment, catering, tour, and mainly the transmission of television and radio programs.

As illustrated in Figure 1, this structure comprises a reinforced concrete interior tube and a steel external tube. There are some floors and four levels of connection girders linking the interior tube with the external tube. The external tube (see Figure 2) consists of 24 concrete-filled-tube (CFT) columns uniformly spaced in an oval configuration and inclined in the vertical direction. The dimensions of the oval decrease from 60 m × 80 m at the ground to the minimum of 20.65 m × 27.5 m at the height of 280 m before increasing to 40.5 m × 54 m at the top of the tube (454 m). The interior tube (see Figure 3) is also an oval with constant dimensions of 14 m × 17 m, while the centroid differs from that of the external oval. This hyperbolic shape makes the structure interesting and attractive from an aesthetics perspective, it also makes it mechanically complex. A sophisticated long-term structural health monitoring (SHM) system consisting of more than 700 sensors of 16 different types has been designed and is being implemented to monitor the GNTVT during both construction and service stages. Read More >> 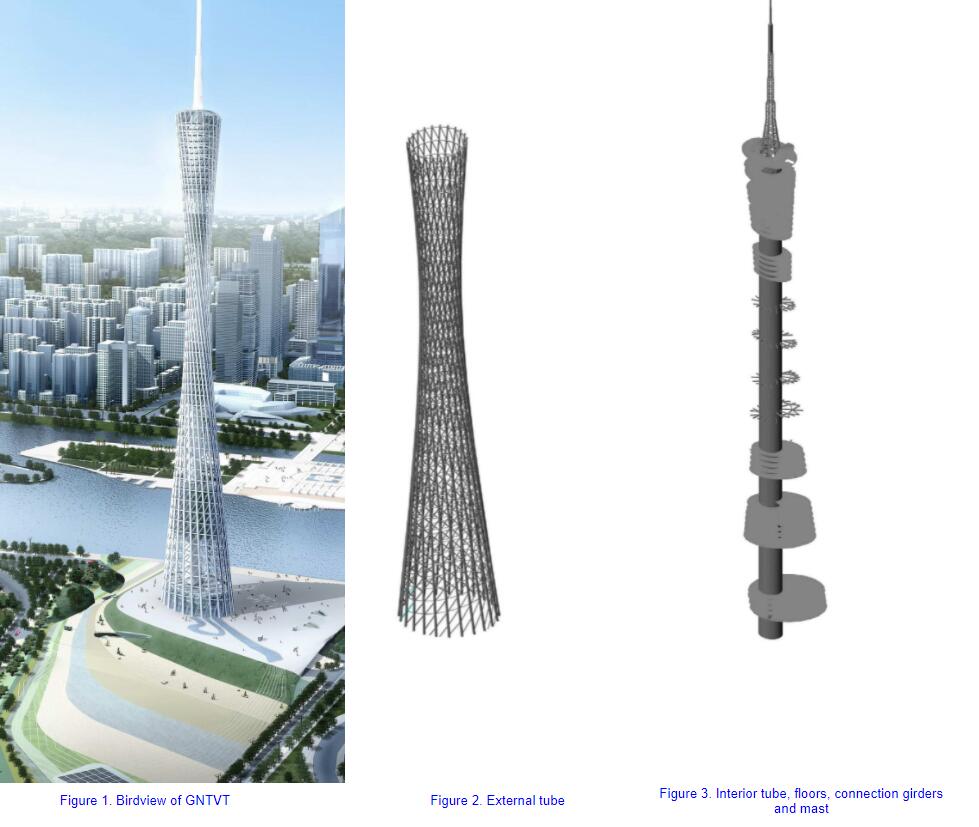