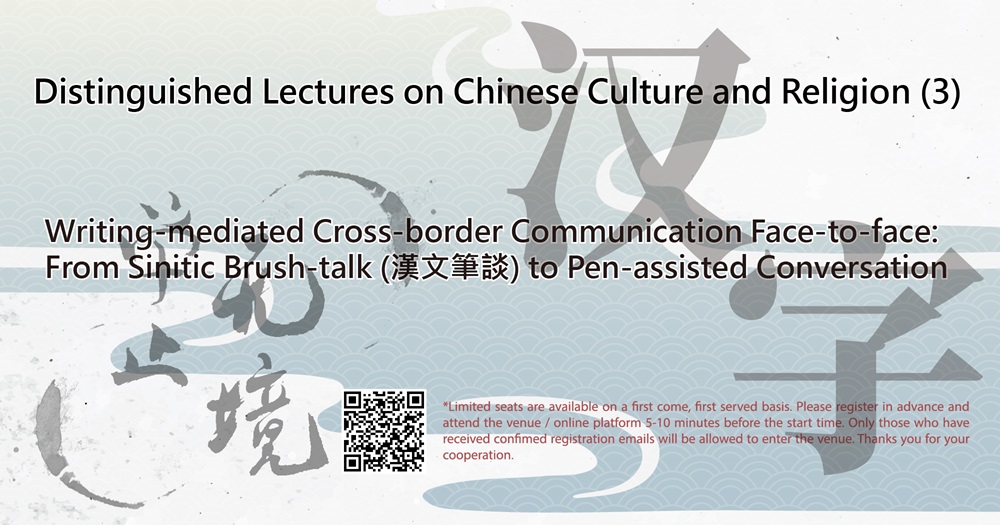 Abstract (based on the abstract of Chapter 1)
In this CIHK webinar, we will discuss the material conditions of and historical background to the use of Classical Chinese or Literary Sinitic in writing-mediated brush conversation between literati of Sinitic engaged in cross-border communication within Sinographic East Asia or the Sinographic cosmopolis, which corresponds with today’s China, North Korea, South Korea, Japan (including Okinawa, formerly the Ryukyu Kingdom) and Vietnam. Compared with speech as a modality of communication, real-time writing-mediated interaction between talking humans, synchronously face-to-face, seems uncommon. In any society, speaking is premised on one condition: the interlocutors must have at least one shared spoken language at their disposal, but even then, there are circumstances under which speaking is either physically not feasible or socially inappropriate. Could writing function as an alternative modality of communication when speaking is not an option due to the absence of a shared spoken language, as in cross-border communication settings? Whereas real-time writing-mediated face-to-face interaction is rare where a regional lingua franca was known to exist (e.g., Latin and Arabic), there is ample historical evidence of literati of Classical Chinese or Literary Sinitic from different parts of Sinographic East Asia conducting ‘silent conversation’, synchronously and interactively in writing mode using brush, ink, and paper. Such a pattern of writing-assisted interaction is still practiced and observable in pen-assisted conversation – pen-talk – between Chinese and Japanese speakers today, thanks to the pragma-linguistic affordance of morphographic, non-phonographic sinograms (i.e., Chinese characters and Japanese kanji). We will outline the historical spread of Classical Chinese or Sinitic texts from the ‘center’ to the ‘peripheries’, and the historical background to the acquisition of literacy in Sinitic by the people there. Their shared knowledge of Sinitic helps explain why, for well over a thousand years until the 1900s, literati from these places were able to speak their mind by engaging in ‘Sinitic brush-talk’ 漢文筆談 in cross-border communication.

David C. S. Li
David C. S. Li (李楚成) is professor and Head of the Department of Chinese and Bilingual Studies (中文及雙語學系), The Hong Kong Polytechnic University (香港理工大學). He received his BA in English (Hong Kong), MA in Applied Linguistics (France), and PhD in Linguistics (Germany). He has published widely in multilingualism in Greater China, World Englishes, Hong Kong English, China English, bilingual education and language policy, bilingual interaction and code-switching (translanguaging), Cantonese as an additional language, and South Asian Hongkongers’ needs for written Chinese. He speaks Cantonese, English and Mandarin fluently, is conversant in German and French, and is learning Japanese and Korean. More recent interests focus on the historical spread of written Chinese (Sinitic) and its use as a scripta franca until the early twentieth century in Sinographic East Asia (China, Japan, Korea, and Vietnam).
Email: david.cs.li@polyu.edu.hk.

Reijiro Aoyama
Reijiro Aoyama’s (青山玲二郎) research is concerned with transnational and global processes mediated by migration and the movement of information, symbols, capital and cultural commodities. His research interests include anthropology of work and mobility, narratives of migration, and material and non-material culture of cross-border interactions. He has conducted several long-term ethnographies of the Japanese presence in East Asia, and has published on Japanese diaspora, craftsmanship, and emotional work in service industries, Sino-Japanese animation, and historical cross-border interactions mediated by Sinitic writing. Before taking up his post at The Hong Kong Polytechnic University, he taught at Fudan University, Tsinghua University, and City University of Hong Kong.
Email: rei.aoyama@polyu.edu.hk

Wong Tak-Sum, Sam
WONG Tak-Sum (黃得森) is a post-doctoral fellow in the Department of Chinese and Bilingual Studies at the Hong Kong Polytechnic University. He received his BEng in Computer Science from Hong Kong University of Science and Technology (2004), and PhD in Linguistics from City University of Hong Kong (2018). He has built a treebank of the Tripiṭaka Koreana during his doctoral study and has been working on the quantitative study of historical syntax. His research expertise covers Chinese historical linguistics, Cantonese linguistics, corpus linguistics, computer-assisted language learning, Chinese dialectology and Chinese palæography.
Email: tak-sum.wong@polyu.edu.hk