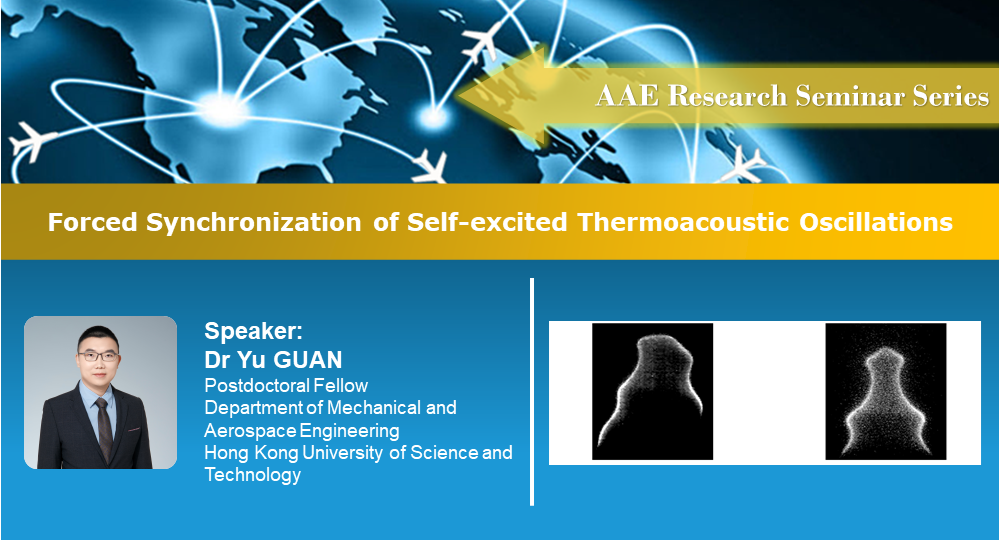 Thermoacoustic instability can pose a serious problem in aerospace propulsion systems such as rocket motors and gas turbines. It typically arises from the coupling between unsteady flames and sound, producing self-excited flow oscillations in the combustion chamber. At high amplitudes, such thermoacoustic oscillations can inflict thermal-mechanical damage, reducing efficiency and reliability. Synchronization theory has previously been used to develop control techniques for self-excited systems such as lasers, plasma columns and aeroelastic structures, but its applicability to thermoacoustically self-excited systems is still unclear. In this talk, recent research on the open-loop control of a prototypical thermoacoustic system within a forced synchronization framework will be presented. Dr Guan will show that external acoustic forcing can be an effective means of weakening both periodic and aperiodic thermoacoustic oscillations, and that the actuation mechanisms can be phenomenologically captured with low-order model oscillators. This provides a promising strategy for modelling, predicting and controlling the complex multiscale dynamics of self-excited thermoacoustic systems, such as rocket motors and gas turbines.

Dr Yu GUAN is a Postdoctoral Fellow in the Department of Mechanical and Aerospace Engineering at the Hong Kong University of Science and Technology (HKUST). His research career in combustion science began at the Institute of Aerospace Propulsion and the State Key Laboratory of Combustion, Internal Flow and Thermo-structure at Northwestern Polytechnical University, where he received his Master’s degree in Astronautical Engineering. He then obtained his PhD degree in the Department of Mechanical and Aerospace Engineering at HKUST and, after graduation, continued working there as a Postdoctoral Fellow. His research focuses on the combustion dynamics and thermoacoustics of gas turbines and rocket motors. He has published in top international journals in combustion, fluid mechanics, aerospace engineering, and nonlinear dynamics, such as the Journal of Fluid Mechanics, Combustion and Flame, Proceedings of the Combustion Institute, Physical Review E, Chaos and AIAA Journal. His research has been recognized by the Combustion Institute with a Best Paper Award at the 12th Asia-Pacific Conference on Combustion. His industrial experience includes working with the Academy of Aerospace Solid Propulsion Technology (China).
Previous Event Next Event