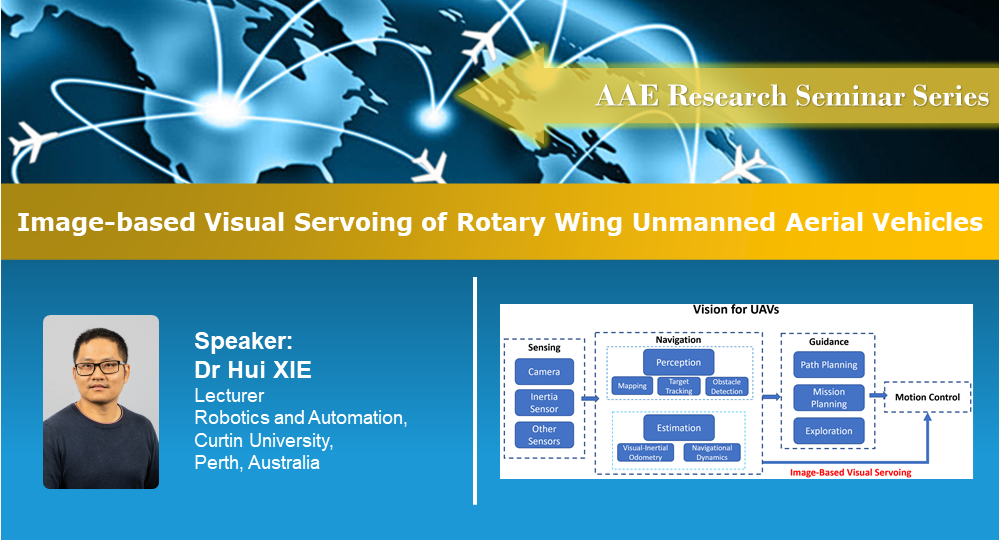 Visual servoing uses camera feedback to control a robot’s motion and is divided into two main approaches: image-based visual servoing (IBVS) and position-based visual servoing (PBVS). The IBVS method minimizes error signals defined in the image space to indirectly achieve the motion control of a robot. Compared to PBVS, the IBVS method is normally more accurate, robust to system uncertainties, requires low computational load, and therefore can be easily implemented. Rotary wing unmanned aerial vehicles (UAVs) have been extensively used for applications such as search and rescue, infrastructure inspection, and surveillance. Considering the benefits mentioned previously, IBVS can be applied to low-cost rotary wing UAVs to achieve satisfactory motion control accuracy. However, this is a challenging problem due to the nonlinear perspective projection of image formation and the underactuated nonlinear dynamics of the UAV. In this seminar, we will review recent advances in image-based visual servoing of rotary wing unmanned aerial vehicles.

Dr Hui XIE received his PhD degree in Electrical and Computer Engineering from the University of Alberta, Edmonton, AB, Canada in 2016. After his PhD study, he worked as a Postdoctoral Research Fellow for two and a half years in Nanyang Technological University (NTU) and the University of Technology Sydney. He was awarded the NTU Presidential Postdoctoral Fellowship in 2018. Currently, he is a lecturer in Robotics and Automation with the School of Electrical Engineering, Computing and Mathematical Sciences, Curtin University, Perth, Australia. His research interests include applied nonlinear control, state estimation techniques and vision-based control and navigation, with applications to unmanned aerial vehicles and mobile robots. As the primary author, he has published 12 peer-reviewed journal articles, including 6 articles in top journals in the field of robotics, automation, and aerospace engineering.