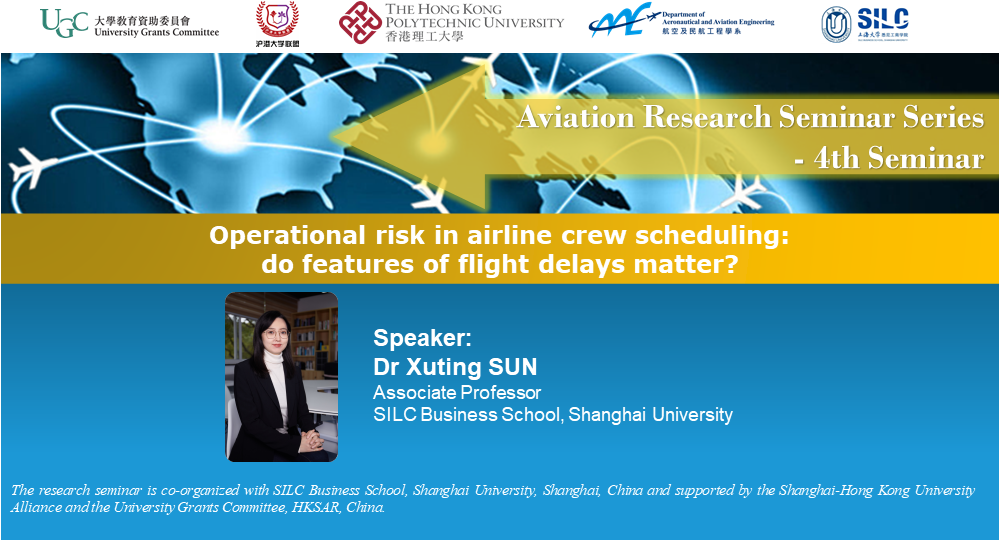 All are welcome! No registration is required.

The research is motivated by the increasing demand in the aviation sector and simultaneously aggravated poor punctuality. The airlines play an important role in improving their service level and mitigating the profit risks incurred due to their poor resources planning. However, identifying and mitigating operational risks faced by the airlines is complicated, as they are coming from both internal and external factors. Due to the realistic nature, we explore the flying time characteristics, and further model the consecutive interdependent departure-arrival times. It is a key feature included in this study that has not been studied in literature. The research characterizes the flying time of each flight by the heteroscedastic regression model. The analytical closed-form for the recursive relationship of the expected departure and arrival times of connective flight legs is then carried out. Accordingly, a novel data-driven bi-criteria mathematical model is proposed in which the interdependent structures of the departure and arrival times of the consecutive flights is incorporated into the robust optimization. A column generation-based algorithm is developed to solve the proposed model. The real-data based computational examples identify that our proposed model sufficiently improves the reliability of the crew pairings decisions by reducing the total deviated time from the schedules with a slight increase of the total basic crew operations cost. Some managerial implications for robust crew pairing and determination of robustness level are discussed as well.

Dr Xuting Sun is currently an Associate Professor with SILC Business School, Shanghai University, Shanghai, China. She received the PhD degree in industrial and systems engineering from The Hong Kong Polytechnic University, HKSAR, in 2018. She has been the Principal Investigator of the research projects granted by the National Natural Science Foundation of China and the Science and Technology Commission of Shanghai Municipality. She has authored and co-authored papers in journals such as Transportation Research Part B, Decision Sciences, Transportation Research Part E, Decision Support Systems, IEEE Transactions on Systems, Man, and Cybernetics-Systems, and IEEE Transactions on Engineering Management. Her research interests include smart and sustainable logistics, airline operations, data analytics, forecasting, risk management, etc.