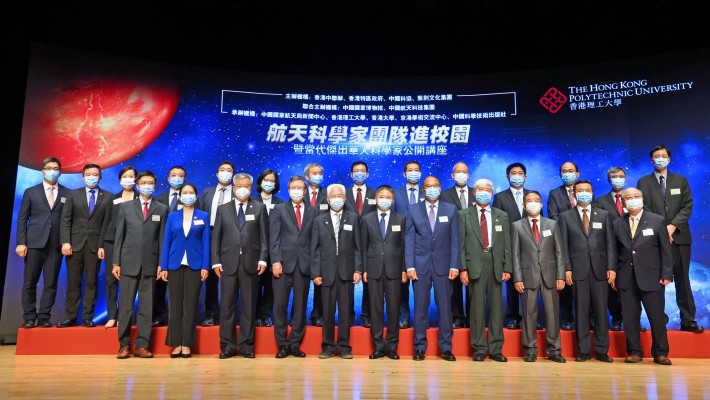 China’s achievements in space exploration have caught the world’s attention, demonstrating its strength in scientific and technological innovation, while bringing glory to its people. As the only tertiary institution in Hong Kong with international space exploration experience, The Hong Kong Polytechnic University was honoured to welcome China’s top astronautical scientists who spearheaded the Nation’s key space programmes from manned missions to the Moon and Mars explorations.

The delegation came to Hong Kong for a series of celebratory events on Space Technology, of which PolyU was a co-organiser. They were warmly welcomed by PolyU Council Chairman Dr Lam Tai-fai and President Professor Jin-Guang Teng, together with Mr Alfred Sit Wing-hang, Secretary for Innovation and Technology of the Hong Kong SAR Government; and Professor Jiang Jianxiang, Director-General of the Department of Educational, Scientific and Technological Affairs of the Liaison Office of the Central People's Government in the Hong Kong SAR.

The delegation gave its first public lecture in Hong Kong at PolyU on 23 June, followed by a series of lectures and school visits, reaching out to local youth with inspiring talks about the Nation’s astronautical programme.

PolyU staff and students also took part in an exclusive dialogue with the scientists and their young Mainland counterparts.

A highlight of the visit was the “Centennial Exhibition on Chinese Scientists and Lunar Soil Sample”, held at the Hong Kong Convention and Exhibition Centre from 26 June to 9 July 2021. The University was thrilled that a lunar soil sample, collected by the Chang’e-5 spacecraft last year using a space tool designed and manufactured by PolyU, was unveiled for the first time in Hong Kong.

Officiating at the inauguration of the Exhibition, Chief Executive of the Hong Kong SAR Government Mrs Carrie Lam said: “Hong Kong people have a particular attachment to the Chang’e lunar exploration programme… PolyU’s research team collaborated with CAST in the development of the ‘Surface Sampling and Packing System’ for the Chang’e-5 and -6 missions... I am proud of local tertiary institutions’ contributions to the Nation’s space programmes.”

The events showcased how the city can play a major role in the Nation’s drive for scientific and technological innovation, as well as reflecting Hong Kong citizens’ pride in the Nation’s space achievements.

I am proud of local tertiary institutions’ contributions to the Nation’s space programmes.

A Warm Welcome to the National Delegation of Space Technology Experts 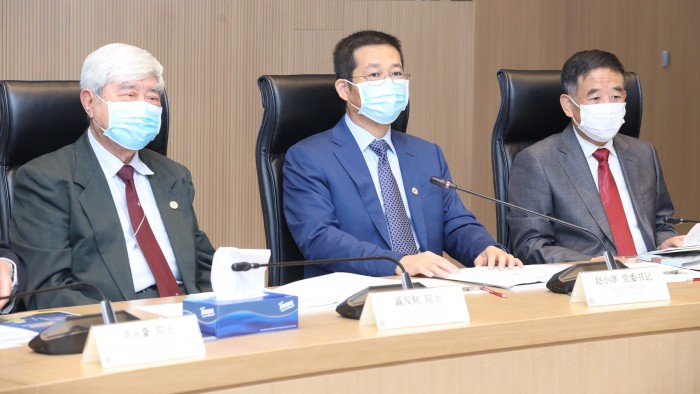 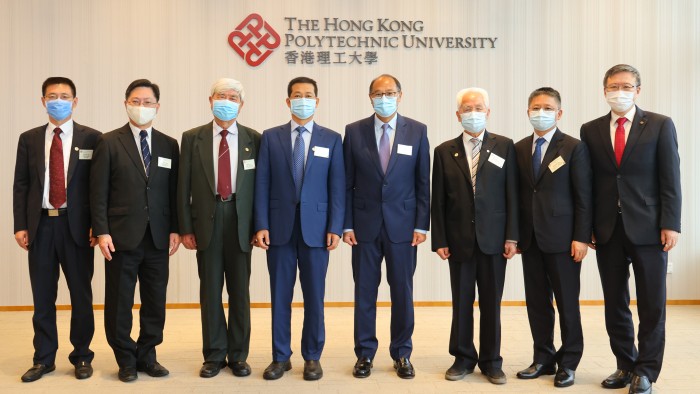 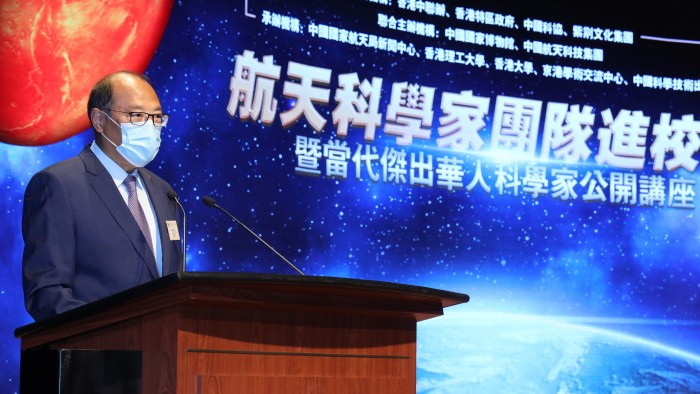 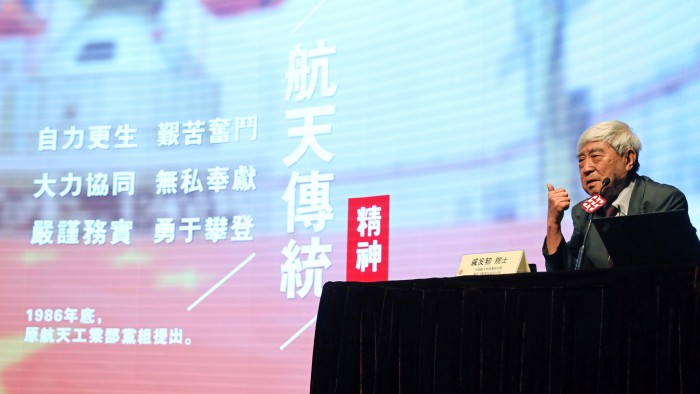 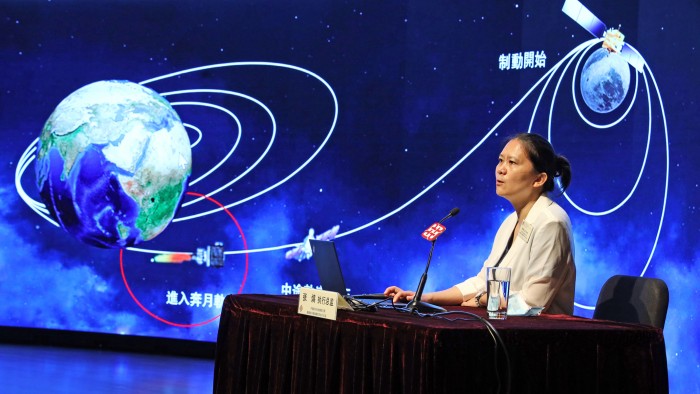 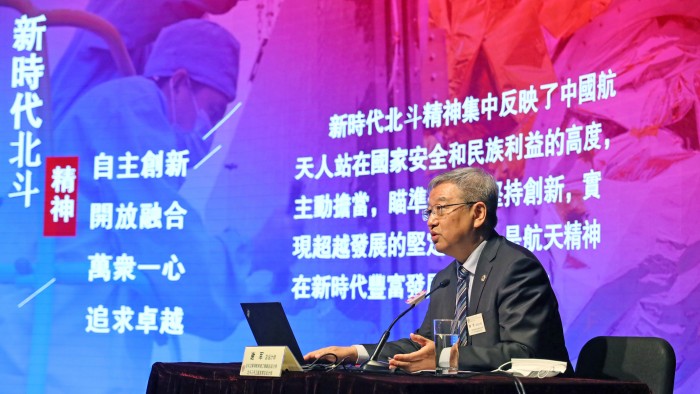 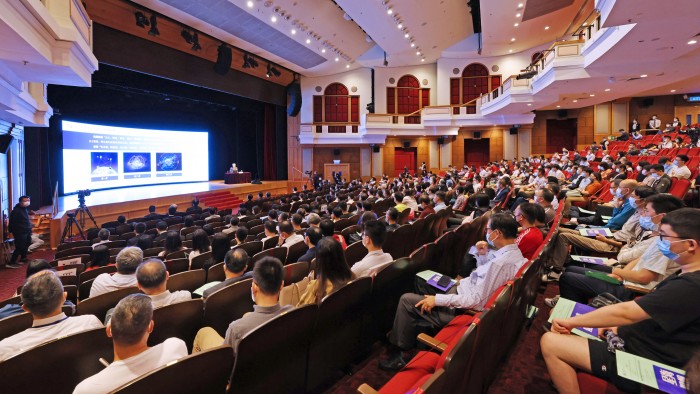 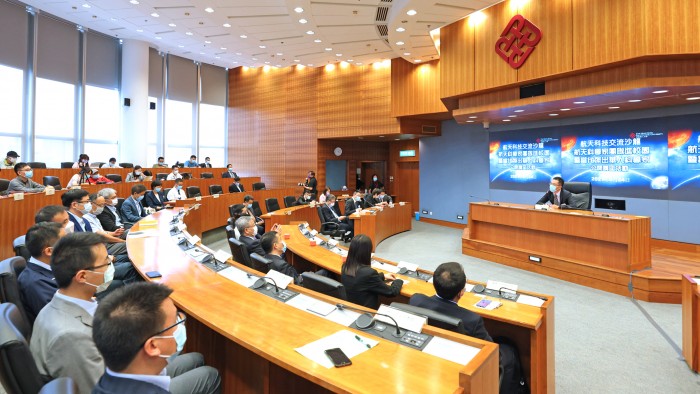 PolyU is the only Hong Kong institution involved in China’s astronautical projects. We welcome PolyU’s researchers to participate even more, and to contribute to the Nation’s endeavours to become a space power. 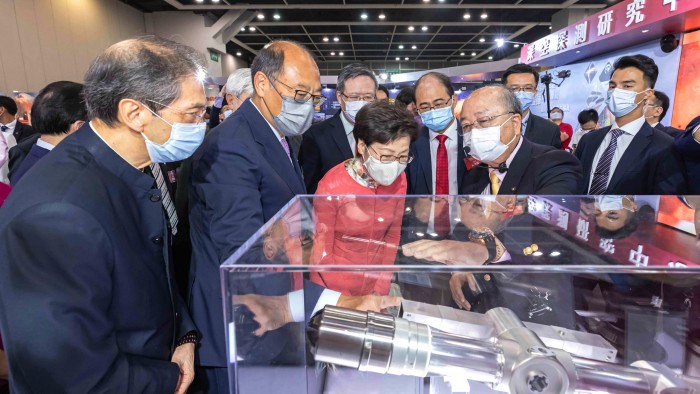 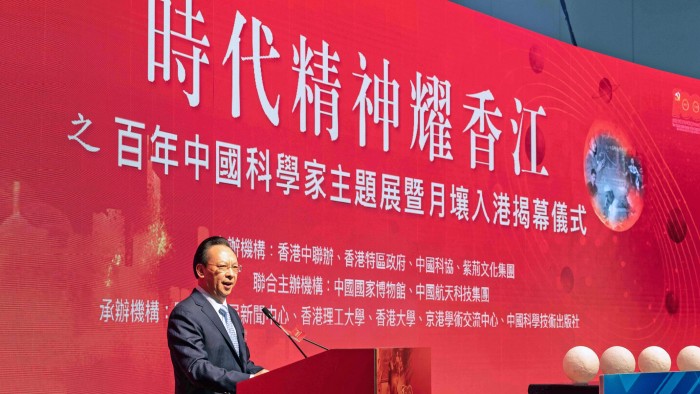 I believe there will be more ‘Hong Kong wisdom’ and ‘Hong Kong solutions’ in the Nation’s drive for innovation.

- Dr Tan Tieniu, Deputy Director of the Liaison Office of the Central People’s Government in the Hong Kong SAR 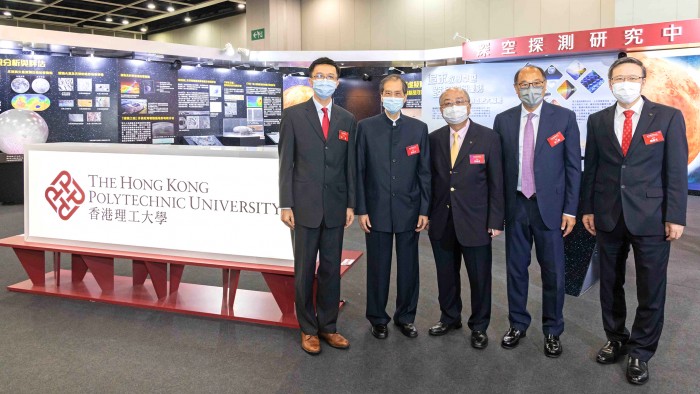 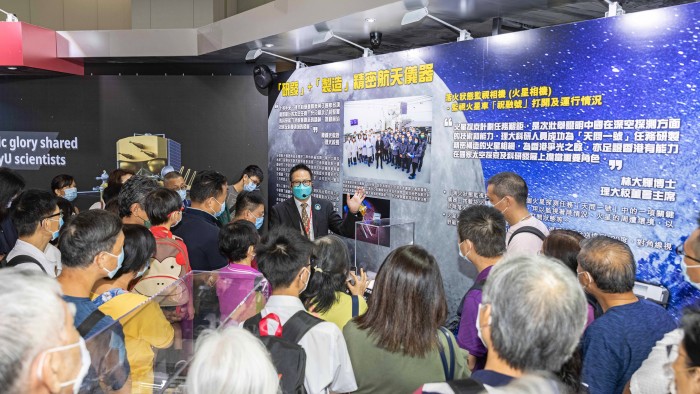 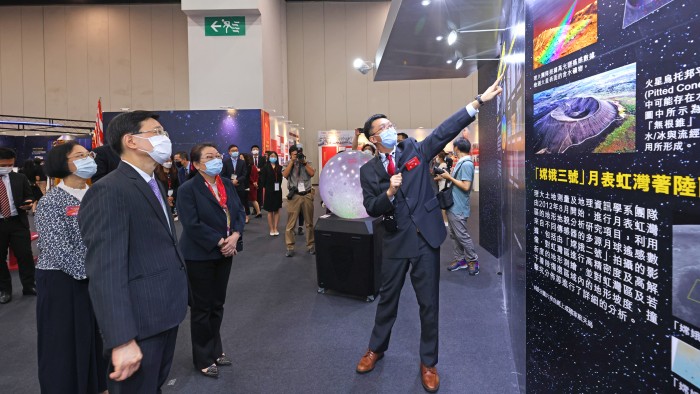 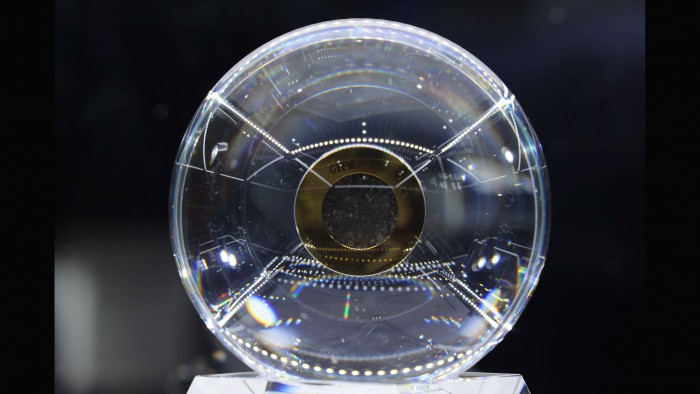 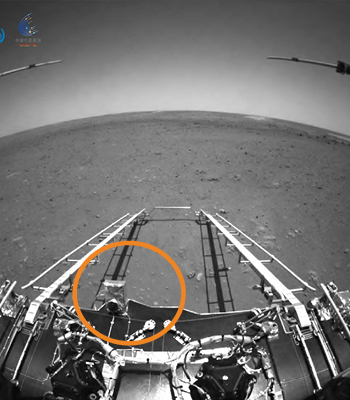 The first photo sent from Mars by Tienwen-1 after landing - The PolyU Mars Camera (circled) is seen undamaged.

China landed a spacecraft on Mars for the first time in May 2021 in the Tianwen-1 mission, becoming the second country in the world to land and operate a rover on the Red Planet. PolyU researchers played a vital role in the mission, in collaboration with the China Academy of Space Technology. 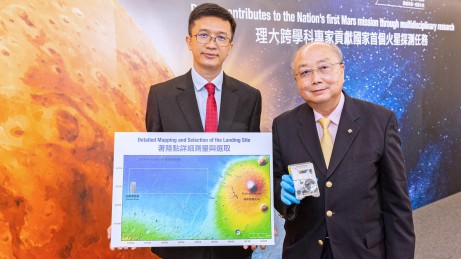 Meanwhile, Professor Yung Kai-leung, Sir Sze-yuen Chung Professor in Precision Engineering, and Associate Head of the Department of Industrial and Systems Engineering, led a team to develop a sophisticated space instrument, the “Mars Landing Surveillance Camera (Mars Camera)” for capturing images of the planet and monitor the status of the Zhurong Mars rover. 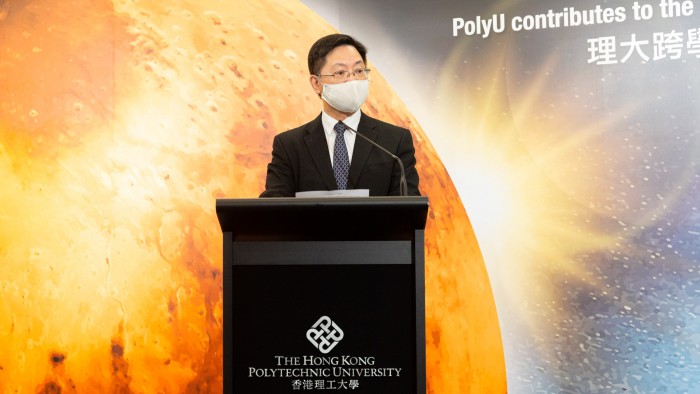 The fact that PolyU was invited to participate in another major national space mission with its scientific research capabilities is a clear demonstration of Hong Kong’s exceptional strength in research and innovation.

- Mr Alfred Sit, Secretary for Innovation and Technology of
the HKSAR Government 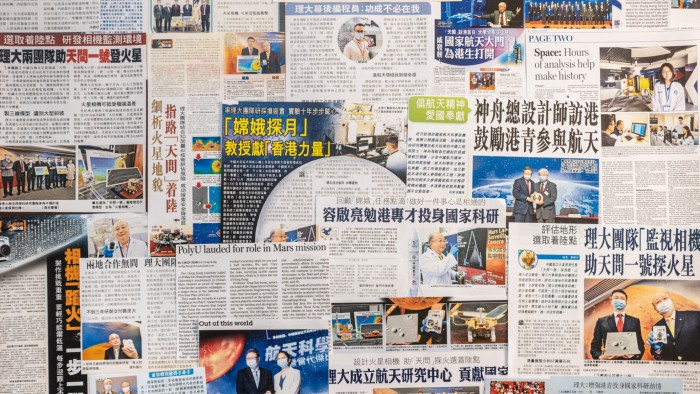 Extensive media coverage on PolyU’s participation in China’s space programme, highlighting the collaboration opportunities between Hong Kong and the Mainland in the country’s innovation drive.

Prof. Yung Kai-leung, from the Department of Industrial and Systems Engineering, together with researchers from the Industrial Centre at PolyU, used the concept of dental forceps to develop the “Space Holinser Forceps System”, which was used by astronauts for precision soldering at the former MIR space station. 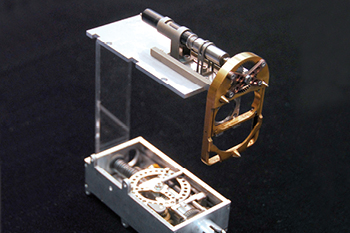 PolyU developed the “Mars Rock Corer” for use in the Mars Express Mission. 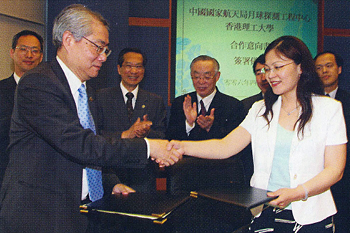 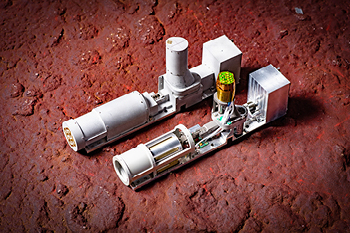 PolyU developed the “Soil Preparation System” for the Sino-Russian Phobos-Grunt Mission, to collect soil samples from the Martian moon Phoboes. 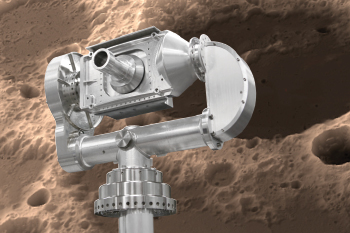 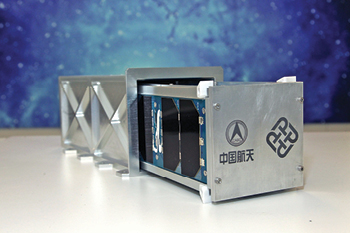 PolyU developed the “microsatellite platform and deployment system” with Aerospace Dongfanghong Development Ltd, Shenzhen, for Long March-6’s “20 satellites in one rocket” mission. The instrument was installed in the “Kaituo-1B” microsatellite. 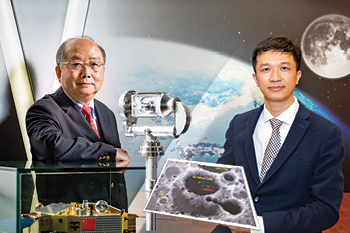 The Nation made history with the first soft landing on the far side of the Moon with the success of the Chang’e-4 mission. PolyU helped select the landing site through topographic and geomorphological characterisation and analysis; and captured images of the Moon using the “Camera Pointing System” 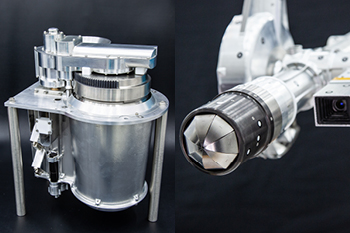 In collaboration with CAST, PolyU developed and manufactured the “Surface Sampling and Packing System” for the Nation’s Chang’e-5 mission, the first lunar sample return mission. The system automatically collected and packed the sample on the lunar surface following the soft landing of the Chang’e-5 probe. 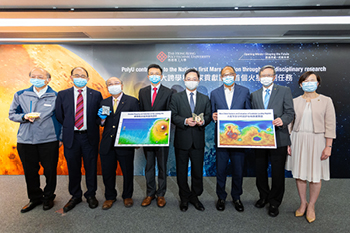