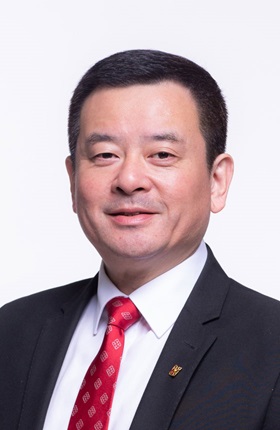 Professor Ben Young is Vice President (Student and Global Affairs) and Chair Professor of Steel Structures of The Hong Kong Polytechnic University (PolyU). Professor Young oversees the institutional policies and plans related to student development and culture promotion as well as the global engagement endeavours in educational initiatives involving the establishment of partnership with leading universities and strategic partners all over the world. Before joining PolyU, Professor Young was a professor of structural engineering in the Department of Civil Engineering at The University of Hong Kong (HKU) and held a number of leadership roles at the university, including Associate Dean of the Graduate School, Associate Dean for Teaching and Learning – Taught Postgraduate Programme of the Faculty of Engineering, and Master of the Graduate House. Professor Young was the founding Warden of Suen Chi Sun Hall at HKU from 2005 to 2014. He was also the Warden of Hall #3 at The Hong Kong University of Science and Technology (HKUST) from 2003 to 2004. He was previously an adjunct professor at Zhejiang University and guest professor at Tongji University. Professor Young received his BSc, BEng and PhD degrees from the University of Sydney, Australia in 1991, 1993 and 1998, respectively.

Professor Young represented the Graduate School of HKU and participated in the “Framework for the Internationalization of Doctoral Education (FRINDOC)” project as one of the six steering committee members and the only committee member from Asia. The FRINDOC project was initiated by the European University Association (EUA) that has more than 800 higher education institutions in 48 countries in Europe. The aim of the project was to develop an online tool to help different institutions to review their internationalization of doctoral education and identify good practices. Furthermore, as the co-initiator and developer of the HKU Hall Education Development project, Professor Young was responsible for leading the development of initiatives and programmes including seminars, workshops and overseas experiential learning trips.

Alongside his contribution to the internationalization and student development aspect of the higher education sector, Professor Young is well acquainted with academic research and also actively serves on important academic panels in various government agencies and non-governmental organisations. He was a panel member for the Research Assessment Exercise (RAE) 2014 in the Built Environment Panel under the University Grants Committee (UGC), Hong Kong. He also served as a panel member for the General Research Fund (GRF) in the Engineering Panel of the RGC Hong Kong from 2010 to 2016. Professor Young was one of the code writers for the “Hong Kong Code of Practice for the Structural Use of Steel” published by the Buildings Department, The Government of the Hong Kong Special Administrative Region (HKSAR). Professor Young is also an advisory member of the Committee on Structural Stainless Steel, the American Institute of Steel Construction (AISC). In addition, he is a committee member of the SEI/ASCE-8 Specification for the “Design of Cold-formed Stainless Steel Structural Members”, American Society of Civil Engineers. He is currently a member of the Accreditation Advisory Board under the Innovation and Technology Commission, HKSAR.