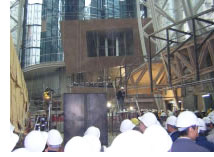 With the rapid increase in population in the Far East, especially the development of big cities and city groups in China, and the increasing number of non-accidental fires, fire ‘safety’ in dense urban areas has to be considered carefully. Big accidental fires had happened before in old high-rise buildings, cross-harbour tunnels and buses in Hong Kong; and in many old high-rise buildings and new shopping malls in China. Non-accidental fires reported over the world included the terrorist attack fires in the World Trade Center on 11 September, 2001 (WTC-911) in USA; arson fires in universities in Beijing; and underground railway arson fires in South Korea and Russia. Several arson fires were reported in Hong Kong in a bank, a karaoke, and an underground train vehicle. Fire safety should be examined carefully in new architectural features with deep-plan, high-rise, well-sealed and framed steel structure.

The overall aim of fire engineering research in the Department is to develop a scientific understanding of building fires and to establish an adequate theoretical basis for fire protection engineering for Hong Kong and the Mainland China. This includes the physical and chemical processes of material decomposition, fire ignition, flame properties, thermal radiation, fire spread mechanisms, smoke production and spreading mechanisms. With sound basic principles, the total fire safety concept can be implemented by working out appropriate hardware design on active fire control systems and passive construction elements; and software fire safety management.

Research effort was directed on the mathematical modelling of fire for over 20 years. Detailed combustion chemistry is studied for upgrading the model to the post-flashover stage. Fire chemistry in burning poly(methyl methacrylate), poly (vinyl chloride) and polyurethane were studied. The development of a new fire model is in progress with combustion, turbulence and radiation. Different fire zone models were evaluated.

Another focused area is on fire suppression system. Sprinkler for new architectural features such as coverage of perimeter zone in an atrium is studied. Effort was made on studying long-throw sprinkler installed at height. New technology of water mist system was studied. Adverse effects of steam production and combustion enhancement were investigated. Bench-scale tests with a cone calorimeter and full-scale burning tests were carried out to study extinguishment chemistry with advanced chemical measuring technique. New areas on Video Detection System, and total flooding gas protection system with clean agent were also investigated. Effect of thermal radiation on extinguishing concentration of heptafluoropropane, suppression chemistry and fire retardants were studied.

Advanced topics in fire include studying atrium fires and performance-based design. There is a strong demand to have comprehensive fire regulations for atria, since many new big atria are being built in the local region. Results on fire research had been applied for advising the government Buildings Department in approving fire safety designs with the Fire Engineering Approach similar to Engineering Performance-Based Fire Code through their Fire Safety Committee since 1998. That was advised by Professor Chow from 1998 to 2004, and by Dr. Fong since 2004.