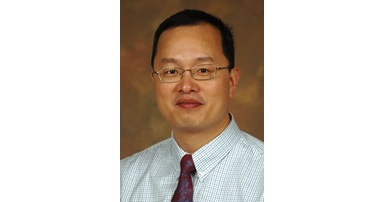 To recognize geographers who have made significant contributions to advancing geography, every year, American Association of Geographers (AAG) elects fellows since 2018.  We are glad to share that Prof. Qihao Weng, Chair Professor of Department of Land Surveying and Geo-Informatics, was elected as the 2021 Class of AAG Fellow. Excel at Urban Remote Sensing, Prof. Weng is widely known for having developed a methodology for estimating land surface temperatures that has been widely applied and cited in a range of other disciplines. He has helped lead the field of remote sensing at the AAG and beyond.   More about AAG Fellows of 2021 Class can be found: http://news.aag.org/2022/01/aag-announces-2021-class-of-aag-fellows/ 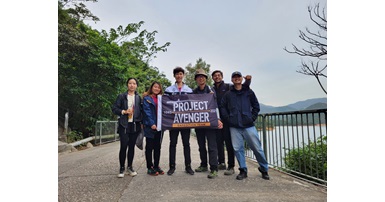 Assisted by Ir Dr. Wallace Lai, Associate Head of LSGI, and his research team with latest surveying technologies, an international team of archaeologists and forensics experts, and over 250 volunteers identified an aircraft wreckage field located at some two-hour uphill climbing to the closest access point at Tai Tam Country Park. The wreckage is believed to be a US warplane ‘TBM Avenger’ crashed during WWII in the Operation Gratitude in 16 January 1945. Within the course of 12 days in November 2021, 80 years after the Japanese invasion, the team recorded 600 fragments in the crash site. Widely reported by few media, Dr. Lai’s team made use of CEDD’s air-borne LiDAR data to portrait the terrain model for identifying possible impact site in the wilderness of Tai Tam. Then during the field work, the team also recorded the coordinates with global navigation satellite system (GNSS) in accuracy of 2cm, re-constructed 3D models of the wreckage by close-range photogrammetry and laser scanners, and mapped the underground objects by ground penetrating radar and metal detector. A complete storyline can be found in here. The Project Avenger unfolds the untold and undiscovered HK wartime history in Tai Tam, and Dr. Lai’s team demonstrates how LSGI technologies can be used to enrich the content of wartime history and archaeology. 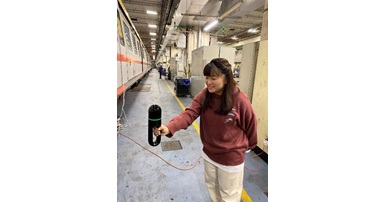 We are glad to share that MAO Hoi Ching Jacqueline, a BSc Year 4 student of LSGI, was selected for the Outstanding Student Award 2021 of both Department and Faculty levels. The award presentation ceremony will be held on 11 March 2022 at Chiang Chen Student Theatre. Congratulations to Jacqueline! 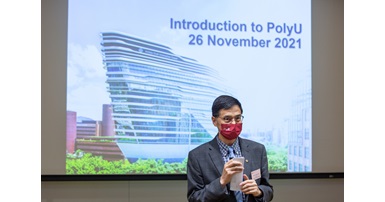 Prof. Geoffrey Shen, PolyU’s director of Global Engagement, and his colleagues invited principals and teachers from 31 local secondary schools to visit PolyU in late November.  During the visit, they shared the university’s latest developments and the salient features of the 4-year undergraduate curriculum, including the incorporation of two new elements: the "Artificial Intelligence and Data Analytics” (AIDA) and the “Innovation and Entrepreneurship” (IE), starting from the 2022/23 cohort.  In addition, the group visited PolyU’s state-of-the-art facilities including the Aviation Services Research Centre, the lab for Smart City and Spatial Big Data Analytics at the department of Land Surveying and Geo-informatics (LSGI), and the laboratories at the School of Optometry and the School of Nursing. 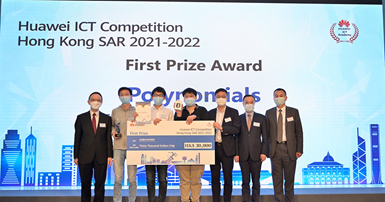 Huawei ICT Competition is a prestigious ICT talent exchange event developed by Huawei for global college students to groom a healthy development of the ICT talent ecosystem - to "find young talents in the information and communication industry". Two PolyU’s teams won the First Prize and Potential Prize for their knowledge and outstanding performance. Polynomials team (PolyU students team) is passionate about big data, AI, cloud service, storage and geospatial technologies, and their applications in E-Commerce, Healthcare, IoT, and smart city. Through a comprehensive set of tutorials and guides on the Huawei iLeanringX platform, the team obtained in-depth knowledge on four kinds of state-of-the-art IT technologies as well as their evolutionary history and applications. Through two rounds of exams, the team stood out by winning the First Prize of the competition. Another team Babushka AI, on the other hand, also won the Potential Prize. They were the 8 teams selected for the finals from more than 300 people. With augmented knowledge and experiences, the teams wish to further enhance their practical abilities in the future and become the next generation workforce for the ICT ecosystem.   First Prize team: Polynomials Team members:  Feng Yun Lin , Tang Man Kit (students from Department of Computing (COMP)) and Zhong Xiu Ming  (LSGI MSc student) Instructor: Dr. Yang XU, Department of Land Surveying and Geo-Informatics (LSGI)   Potential Prize team: Babushka AI Team members: LAM Ho Yin, Myrgyyassov Alisher and Dinesh Gautam (students from Department of Computing, Department of Electronic and Information Engineering) Instructor: Dr. Li Bo, Department of Computing   According to Huawei, these local winning teams will be recommended to join the APAC regional competition, compete with other elite students within the region.

Prof. Weng elected as member of The Academy of Europe

Prof. Qihao WENG, Chair Professor and Global STEM Scholar of the Department of Land Surveying and Geo-Informatics, has been elected a foreign member of Academia Europaea (The Academy of Europe) in its 2021 class in late 2021. The object of Academia Europaea is the advancement and propagation of excellence in scholarship in the humanities, law, the economic, social, and political sciences, mathematics, medicine, and all branches of natural and technological sciences anywhere in the world for the public benefit and for the advancement of the education of the public of all ages in the aforesaid subjects in Europe. Members are scientists and scholars who collectively aim to promote learning, education and research. Founded in 1988, with more than 4500 members which includes leading experts from the physical sciences and technology, biological sciences and medicine, mathematics, the letters and humanities, social and cognitive sciences, economics and the law. Invitations for Academia Europaea are made only after peer group nomination, scrutiny and confirmation as to the scholarship and eminence of the individual in their chosen field. Election is confirmed by the Council of the Academia. Current membership stands at around 4,500. Amongst them are seventy-two Nobel Laureates, several of whom were elected to the Academia before they received the prize. The membership page of Prof. Weng can be found here.    Prof. Dr. Qihao Weng also joined the Board of Trustees of The ISPRS Foundation in Dec 2021. The eleven members of the Board manage the fundraising activities and disbursement of funds to deserving individuals to further the scientific and technological work of ISPRS. Prof. Weng will have a three-year term as a Trustee, renewable for up to two further terms. The ISPRS Foundation, Inc. (TIF), is an independently registered entity established to provide financial assistance and in-kind support for benevolent purposes pursued by ISPRS. TIF is a public charity formed to administer an extensive and broadly-based international program that through the raising of funds shall provide grants, scholarships, awards, training supplies and other forms of scientific assistance to qualified individuals and organizations who are pursuing and/or applying knowledge for advancing the sciences and technologies associated with the disciplines embodied by the ISPRS, especially to support those in developing countries and regions.   In addition, the Stanford University has recently released an update of the list that represents the top 2 percent of most-cited scientists in various disciplines. We are honoured to share that Prof. Weng is in the list of top 2% most-cited scientists. The report was prepared by a team of experts led by Prof. John IOANNIDIS, an eminent Professor at Stanford University. The updated list can be downloaded from here. 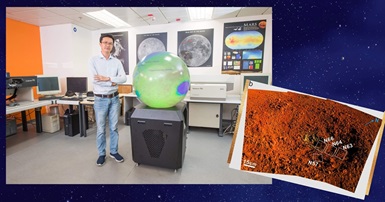 A study led by the National Space Science Center of Chinese Academy of Sciences and joined by Prof. Wu Bo, Associate Head of LSGI and Director of Research Centre for Deep Space Explorations, has found carbonaceous chondrite remnants of an impactor in a young lunar crater formed within one million years, a first-time discovery of such fragments by in-situ investigation on the far side of the Moon. Scientists suggests that carbonaceous chondrite-like meteorites may provide 10 to 20% of the sources of water to the present Moon. Prof. Wu’s involvement in the research was to use innovative 3D mapping technology to create a detailed 3D topographic model of the 2-m size crater from the lunar surface images acquired by the Yutu-2 rover of Chang’e-4. The 3D morphological characteristic of the crater is critical to judge if the crater was resulted from a meteorite impact or not. The results were published in the scientific journal Nature Astronomy (https://doi.org/10.1038/s41550-021-01530-w). 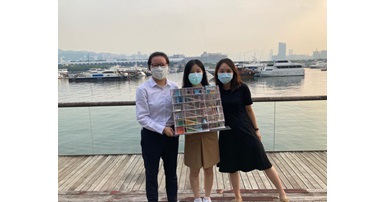 On 17 November 2021, the 27th Congregation of Faculty of Construction and Environment - LSGI session was held at the Jockey Club Auditorium on the PolyU campus as well as online. More than 110 graduates from LSGI were honoured for completing their studies at higher diploma, undergraduate and postgraduate levels.   Presiding at the congregation was Prof. Xiang-dong Li, Dean of FCE, who congratulated the graduates and encouraged them to stay connected to PolyU by joining one of its alumni associations. LSGI’s graduate representative Ms Tai Kai Wing gave a valedictory speech to show the gratitude to their parents, professors, instructors and classmates of the Class of 2021.  It was a memorable occasion for all concerned.   Congratulations to all Class of 2021!

News Faculty of Construction and Environment 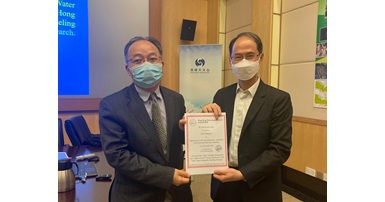 Mr. Mingchen Zhu, a visiting PhD student from the Micro-Laboratory of Atmospheric Research and Geomatics Engineering (Micro-LARGE), Department of Land Surveying & Geo-Informatics (LSGI), the Hong Kong Polytechnic University (PolyU), has won the prestigious “Zhu Kezhen” Prize for the year 2021 from the Hong Kong Meteorological Society (HKMetS). The soon-to-be PhD graduate from the Southeast University, Nanjing, Mainland China, did 6-month visiting research in 2018 at Prof. George Liu’s Micro-LARGE Lab, an internationally recognized group for atmospheric water vapor observation, modeling, calibration and evaluation using advanced multi-sensors of satellite- and land-based instruments.  The “Zhu Kezhen” Prize is given only when one meritorious publication in the field of meteorology has been identified. This prize is set to commemorate the outstanding service of the founding Chairman, Mr. Patrick Sham Pak, to the Hong Kong Meteorological Society and in honour of the distinguished Chinese meteorologist, Zhu Kezhen. The prize comes with a certificate and cash HK$1,000. Mr. Mingchen Zhu is the 2nd recipient from the Micro-LARGE Lab.  The prize winning paper “Zhu M, Liu Z, Hu W (2020). Observing Water Vapor Variability During Three Super Typhoon Events in Hong Kong Based on GPS Water Vapor Tomographic Modeling Technique. Journal of Geophysical Research: Atmospheres, 125(15). https://doi.org/10.1029/2019JD032318.” was published in 2020 at the American Geophysical Union (AGU)’s Journal of Geophysical Research: Atmospheres by Mingchen Zhu and his supervisors Prof. George Liu at PolyU and Prof. Wusheng Hu at Southeast University. This study for the first time numerically characterizes the water vapor spatial and temporal variations during the life cycle of three super typhoons and demonstrates the effectiveness of using GPS/GNSS water vapor tomographic technique to study water vapor evolution during super typhoon events. This research allows forecasters to have a better understanding and forecasting of the water vapor spatial and temporal variations during tropical cyclones. Congratulations!