Welcome to Teaching and Tweeting: Five Days of Twitter #5DoT!

Today we will look at:

Twitter only allows you to send 280 characters (recently doubled), which doesn’t seem much. In academia, we almost always write at length about complex ideas, so it’s difficult to say something meaningful in such a short amount of text. But that doesn’t mean that Twitter is superficial or only used to tweet about frivolous things. Many people, especially in an HE context, who are new to Twitter aren’t sure what to say, or why updates about whatever they’re doing would be interesting to others.

The appropriate tone for a professional twitter account needn’t be overly formal – you can be chatty and conversational, and allow your personality to come through. In fact, you’ll have to be a bit informal if you want to fit everything in, using abbreviations and even textspeak. Even if tweeting on behalf of a department or group, you need to be engaging rather than formal. Do remember though, if you’re tweeting in any professional capacity, that Twitter is a very public medium - don’t say anything you wouldn’t normally say openly in a work context. 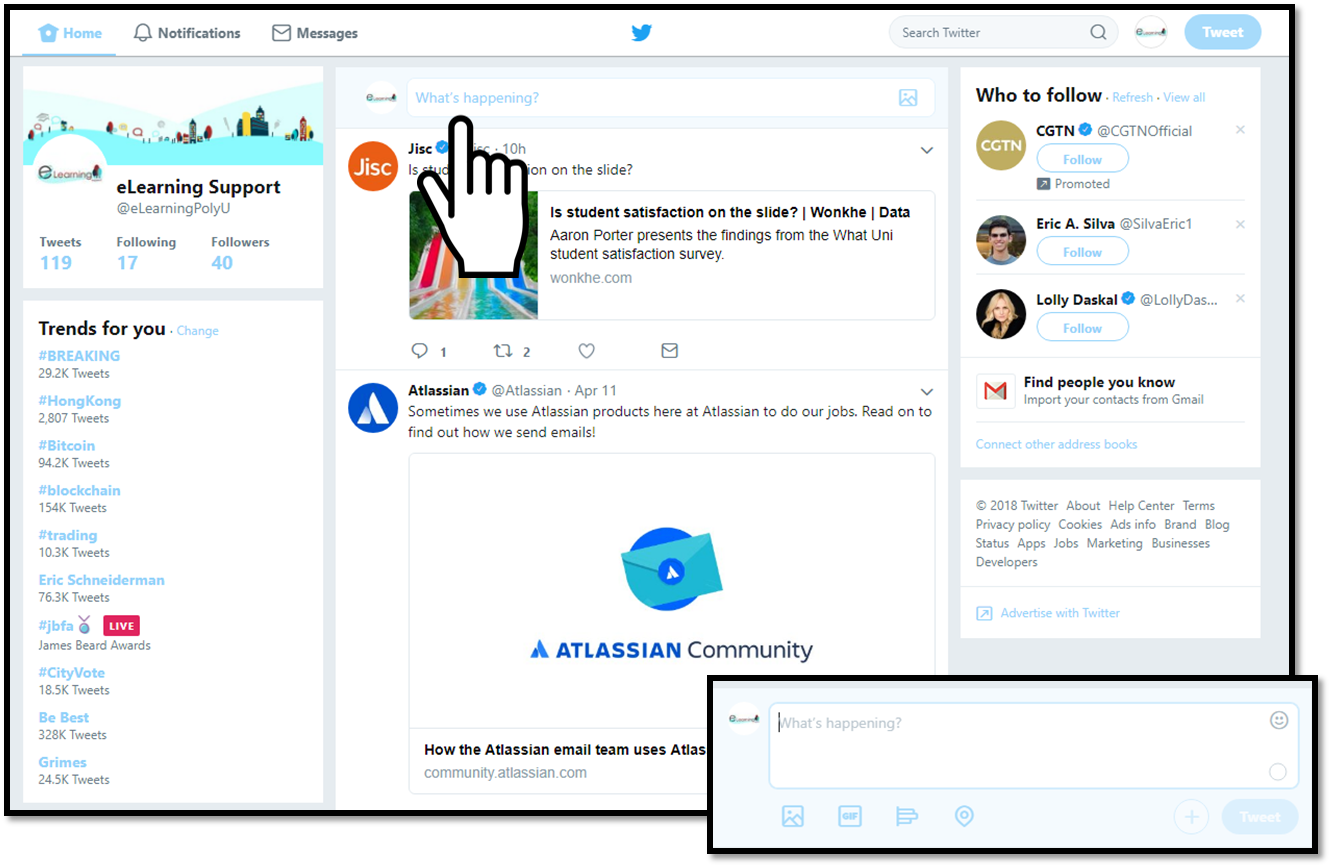 Remember – you’re only able to write 280 characters including spaces, and there’s a small circular counter in this box which allows you to track how many characters you have left. It will stop you once you go over and highlight how many characters you need to delete. You’ll soon develop a suitably concise style, and learn the tricks to abbreviate your writing, such as using ‘&’ instead of ‘and’. This all adds to the informal tone.

Sometimes you might want to address a tweet to someone – it will be visible to other followers, but you want to catch a particular person’s attention with it. This might be because:

To call someone’s attention to a tweet with an @mention, you use their username or ‘handle’ preceded by a @ sign. For example, to let me know you’ve mentioned me, you would include ‘@TELdwatson’ in the tweet. If you click the ‘reply’ option which appears as a small speech bubble at the bottom of each tweet, Twitter will automatically insert the person’s @name into your tweet. 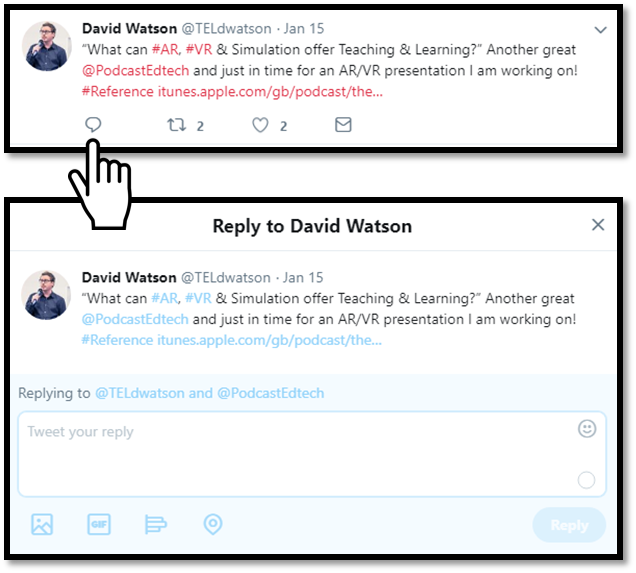 Note:  As the @ sign is reserved for marking people’s handles, you can’t use it as an abbreviation for ‘at’, for example, ‘let’s meet @6pm @cafe’ – it will treat these as an @message, and it’s likely that someone, somewhere, will have chosen @6pm or @cafe as a handle.

A small but important point is where you place the @username. If you are responding to a tweet, using the ‘reply’ button, then Twitter will automatically begin your tweet response with the @username, and you can then type the rest of your message. However, if the very first thing in the tweet is someone’s @username, then only that person and those who follow both of you will be able to see it. If you want the tweet to have a wider audience, then you either need to put a full stop in front of the @ sign like this: .@TELdwatson OR you could include the @username later on in your tweet as part of the sentence, for example: ‘Reading @TELdwatson’s blog post about Twitter – some useful tips!’

Why might you want a wider audience to see conversations between you and another user?

What’s in it for them:

What’s in it for you:

What’s in it for your followers:

Of course, there may be times when you don’t want a wide audience to see the interaction, if it’s not going to be understandable out of context, or of interest to them but just cluttering up their feed, and in these cases, you can just start the message with ‘@’. Remember that Twitter is a very public medium, and whether you @message someone or not, your tweets will be visible to anyone who views your profile. If you really want to send a message to just one person, but don’t want it publicly visible to anyone else, Twitter allows you to send them a DM or Direct Message IF that person follows you.  Learn more about Direct Messaging here.

To see who has retweeted your tweets, ‘liked’ your tweets or followed you then click on the ‘Notifications’ tab at the top of the window. 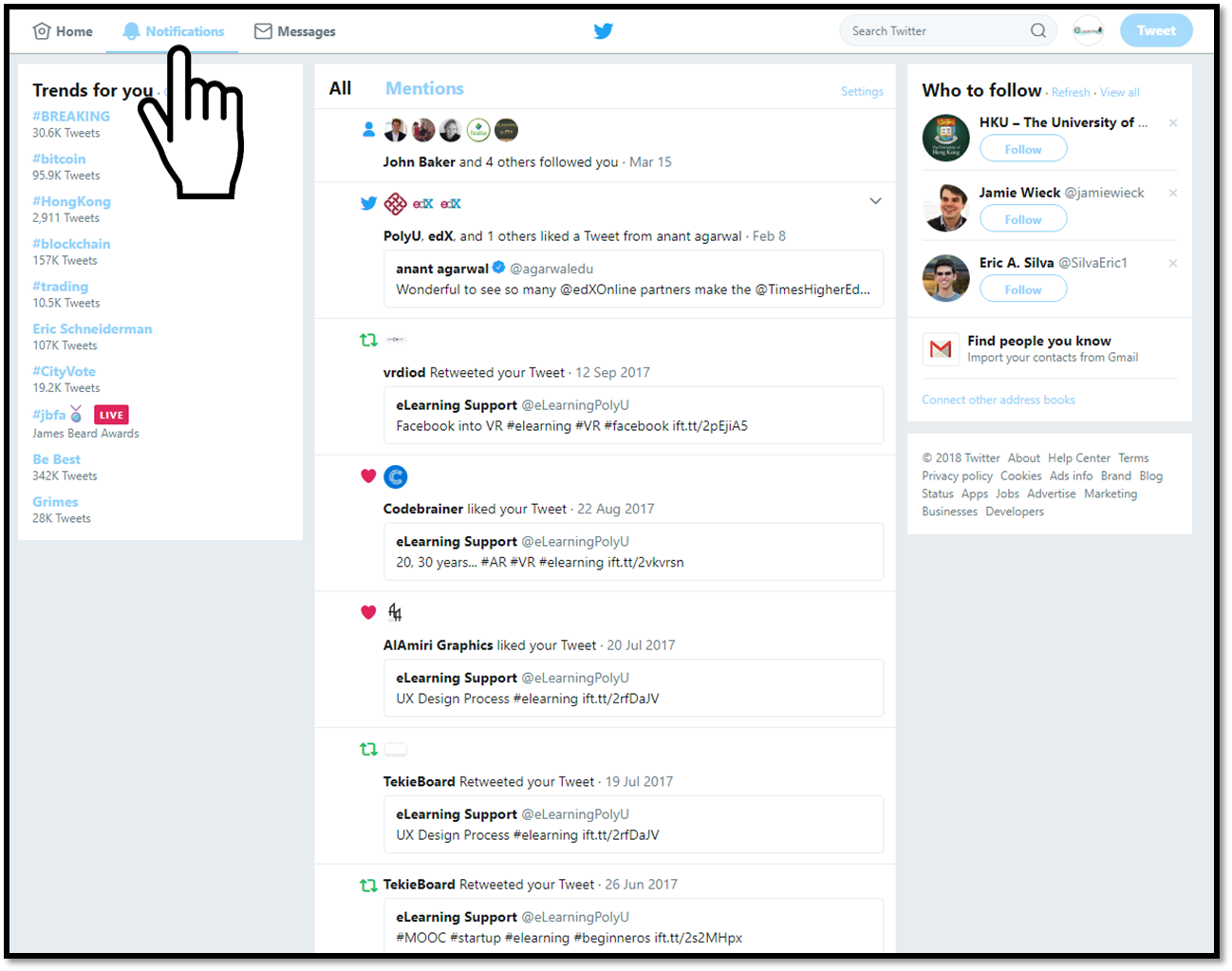 The hashtag (using the # symbol) is, like the @message, a feature that was developed by users of Twitter, and was taken up and integrated by the platform as it was so useful.  The hashtag is a form of metadata. A # in front of a word signals that it is a keyword of some sort, tagging that tweet with a hash symbol (hence hash-tag). This means that you can easily search for all other tweets by other people containing that word similarly marked with a hashtag symbol. In fact, you don’t even need to search – if you click on any hashtagged term, it will search for you.

The hashtag for 5 Days of Twitter is, as you’ve guessed, #5DoT.  You can therefore search for any tweets containing that hashtag, whether you follow the people using it or not. It’s how I will find out who is participating in the 5 Days of Twitter.

Note: If you’re a Mac user and wondering where your hashtag key is, there isn’t one! You’ll need to press the alt key and the 3 key together to make the # symbol.

A hashtag needs to be a single word, preceded by a #symbol, with no spaces or other characters. It doesn’t need to be a real word – it can be an acronym of some sort, like #5DoT, and it needs to be understood, known or guessed by the people it’s relevant to. It could even be several words run into one (which counts as one word) such as #ILoveTwitter (it can help to capitalise the individual words to make it easier to read). What it should be above anything else, though, is short, so that it doesn’t use up too many characters.

We will look at hashtags in more depth tomorrow (Day 3 of #5DoT.)

Now it’s over to you…

Tweet @eLearningPolyU with a link to an interesting article or video related to your discipline, along with a short introduction from yourself.  Keep this relevant, as for Activity Three on Day 5 you will conduct a public poll related to this article or video.  Remember to include #5DoT at the end of your Tweet!

If the URL of your article or video is really long, you may want to use TinyURL to shorten it – this will save you valuable characters for your Tweets!

Teaching and Tweeting: Five Days if Twitter #5DoT is based on ‘Ten Days of Twitter’ developed by Helen Webster at Newcastle University.  Ten Days of Twitter for Learning Developers by Helen Webster is licensed under a Creative Commons Attribution-NonCommercial-ShareAlike 3.0 Unported License (CC BY NC SA) so it’s free to take, use and adapt for non-commercial purposes.