Welcome to the 4th day of Teaching and Tweeting: Five Days of Twitter #5DoT!

Today we will look at:

We have looked at the content of tweets and including URLs, but including signposts to other content is one way of making your tweets more attractive and engaging – adding media (video, images, gifs) is another. Twitter’s own analysis of two million Tweets sent by thousands of users over one month confirmed that adding video, links and photos all boost the number of ‘Retweets’ you receive, i.e. the number of people who re-post your tweet to their followers:

Why would you want to add an image to a tweet?  You may wish to share a slide you have seen at a conference, share a graph or equation for students to see, share a screenshot of a quote in an article or simply share a selfie at a historical site – there are millions of reasons for sharing images, for example: 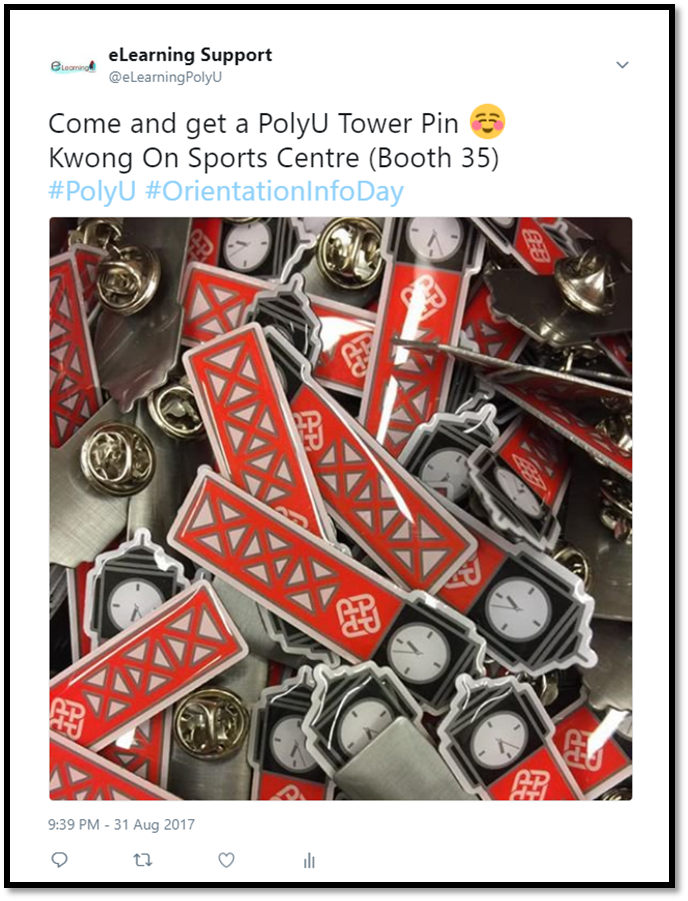 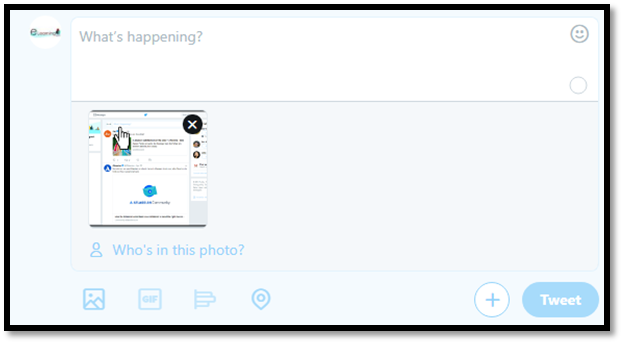 Twitter now supports the use of animated GIFs in Tweets. These are short animations or videos that will play on repeat alongside your tweet. You might include a GIF in your tweet to stress your point or let others know your thinking on something in a quick, humorous way. You can find GIFs on sites like Giphy, or you can make your own. Twitter also has an inbuilt GIF library to choose from. 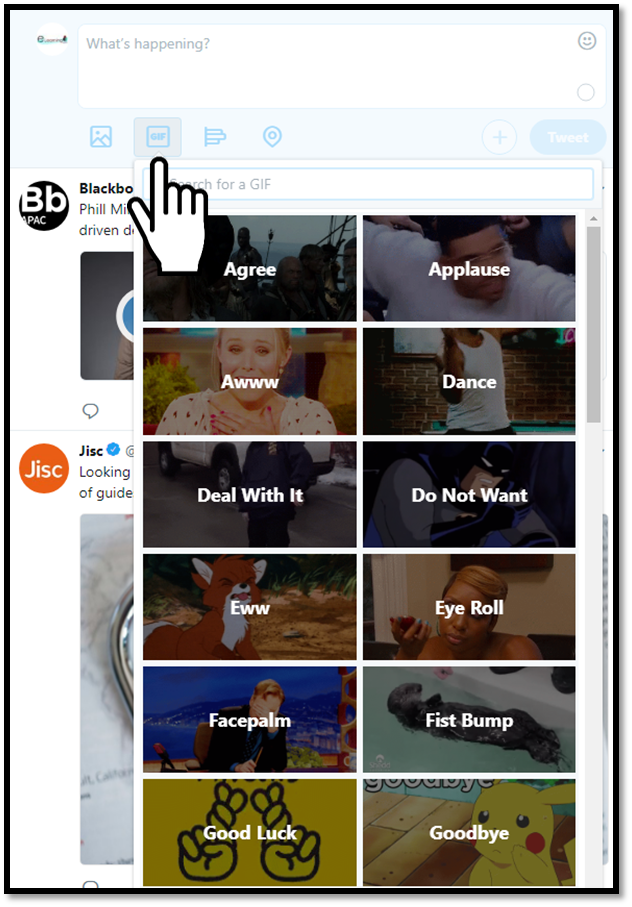 Adding Video to your Tweets

You may want to share a useful video you’ve found on YouTube, Vimeo, TED or TED-Ed – perhaps of a presentation or talk, or public engagement. You could also share something you’ve uploaded yourself – a Panopto lecture recording, for example. If the video is already on the web somewhere, you should check to see if there is a Share to Twitter button or icon alongside the video. If so, just select that and it will take you to a new tweet box (you might be prompted to log in first) with the URL to that video already in the tweet. If there is no Share to Twitter icon alongside the video, simply copy the URL to the webpage and paste it into your tweet, as we did in Day 2.

If you want to create a new video and upload it to Twitter, you can do this using the Twitter for iOS or Twitter for Android mobile apps. You can also create a live video on Twitter.  To record a video for a tweet (available on iOS and Android apps):

To tweet a video previously recorded on your device (iOS apps only):

To create live videos on Twitter (iOS and Android apps):

It is now possible to create live videos. Simply click on the the feather quill and begin a tweet as normal. Then, tap the live video icon. You can end a live video any time by tapping end video. You will need to give permission for the app to access your camera and your microphone as well.

There are a myriad of ways in which Twitter could be used within and alongside lectures or seminars, depending on your subject, topic and creativity. Dr Mark Sample, Associate Professor of Digital Studies at Davidson College, developed a framework for teaching with twitter which considers the level of interaction and activity required by the student.  The vertical axis of the framework is a continuum of the conversation level required/generated by the type of use (from monologic to dialogic); the horizontal axis measures the level of student activity (from passive to active): 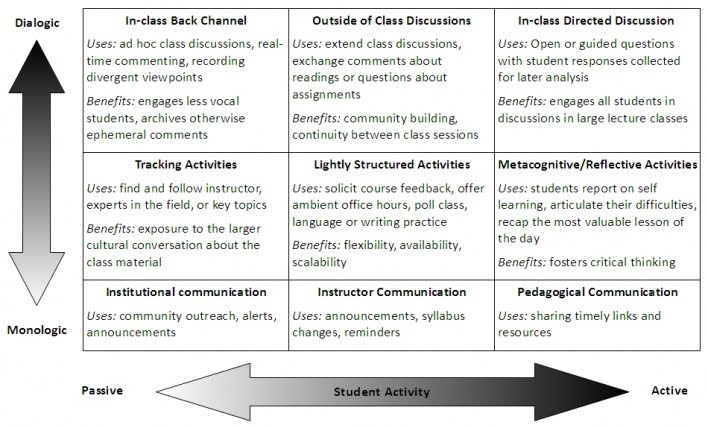 The framework highlights the variation between using Twitter as a broadcasting medium and fully embracing it as a learning community. One may be more appropriate than the other for your circumstance, or you may like to test with the water with a passive/monologic approach before diving in. Below are some ideas that fit within Sample’s framework.

Think of the number of useful articles, videos or connections you have found via Twitter in just ten days. There are just as many opportunities for students to expand their personal learning network and build a Twitter community around their subject. Establishing and encouraging the use of a module/programme/subject hashtag can facilitate student-student and student-tutor engagement amongst the cohort, outside of the formal setting. It also provides a convenient forum for resource-sharing and commentary, by both tutor and student. Even more valuable, it can offer the opportunity for students to interact with the actual subject of their studies, e.g. authors, companies, actors, educators etc. by tweeting questions directly to them.

Academics such as Donna M. Alexander have been using a pedagogical approach known as the ‘Twessay’ as a way to develop critical thinking skills and engage with the work of their peers via Twitter. Instead of writing a traditional essay, students are tasked with writing a tweet to demonstrate their understanding of a theme or topic. They can use images, links and hashtags but the idea is that they don’t use more than 140 characters to get their point across. This approach was originally blogged about by Jesse Stommel, the co-director of Hybrid Pedagogy and Digital Pedagogy Lab back in 2012.

Twitter fiction (#twitterfiction) has emerged as a unique form of digital storytelling. Approaches range from an individual developing a story via concise 140 character snippets over time (until recently, Twitter limited tweets to 140 characters), to a progressive collaborative writing effort where students contribute to the story or event in turn. Numerous Twitter handles can contribute alternative character viewpoints to progress the plot. German language tutor, Vivian Finch, uses Twitter storytelling as a vehicle for students to analyse the German short story genre and build their language skills. Check out the Storify of the finished story (if you can read German!), or why not reach out to Vivien (@vivienfinch) on Twitter if you’d like to hear more. Andrew Fitzgerald’s Ted Talk, Adventures in Twitter Fiction, further explores the microblogging approach to storytelling.

Yesterday (Day 3), we looked at how the hashtag is used for livetweeting conferences or CPD events. Educators have been using this approach for some time to enhance student engagement and build a classroom ‘backchannel’ for a module. Livetweeting can foster both a community discussion around the focus of a lecture, as well as enabling students to feed through questions or comments to the tutor – this is particularly useful in large lectures or for shy students. Students can use livetweeting as a means of synchronous, concise note-taking or resource-sharing.

Watch this video to hear staff and student experiences of using Twitter as a backchannel on one US-based university module.

Language tutors can host conversations in the language of study, but why not also follow hashtags in other languages (e.g. those related to current events) in class? This would be particularly useful for examining and interacting with cultural or country-specific reactions to world or annual events, whilst sharpening language skills. Twitter search results can be refined by language or location from the Advanced Search page.

Mark Sample also provides his practical tips for teaching with Twitter, which include:

Of course, you don’t have to use Twitter in the classroom for it to have an impact on your teaching practice. As you continue to expand your personal learning network over the next few weeks, begin to compile a list of influential educational tweeters – both on pedagogy and your own subject area. Exposure to a larger network of educators results in new influences and should encourage reflection on your own methods. Lewis and Rush (2013) investigated the role of Twitter in initiating digital networks in Higher Education, finding it to be a valuable tool in the development of educational professionals and one possessing characteristics of a community of practice. Similarly, William Ferreter’s (2010) reflective piece on why teachers should try Twitter focuses on the influence this has had on his own teaching, revealing: “I now turn to Twitter friends for help in the same way that I turn to the teachers on my hallway“.

Get the conversation started…

Teaching and Tweeting: Five Days if Twitter #5DoT is based on ‘Ten Days of Twitter’ developed by Helen Webster at Newcastle University.  Ten Days of Twitter for Learning Developers by Helen Webster is licensed under a Creative Commons Attribution-NonCommercial-ShareAlike 3.0 Unported License (CC BY NC SA) so it’s free to take, use and adapt for non-commercial purposes.

This blog post also includes content by Emma Fletcher and Suzy Mills at York St John University who have recently run their iteration of Ten Days of Twitter.  Ten Days of Twitter was adapted by Technology Enhanced Learning for use at YSJ, and is licensed under a Creative Commons Attribution-NonCommercial-ShareAlike 4.0 Unported License.