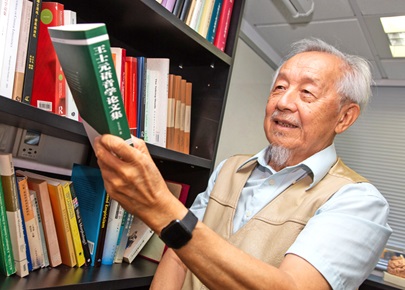 【#WeArePolyU】As an internationally renowned figure in linguistics, what caused you to shift your research interest in the past decade to study the relationship between language and cognitive decline brought about by ageing?

“My friend, Charles (the late Nobel laureate in physics Prof. Charles Kao), succumbed to Alzheimer’s disease (AD) in his later years. AD typically onsets decades earlier than it can be detected clinically, so by the time he received medical treatment, it was already too late. I hope that my latest ageing-related study will unearth language biomarkers to predict the risks of neurodegeneration”.

Although Prof. William Shiyuan Wang is in his 80s with a 60-year-long academic career, his passion for linguistics has never diminished. His research covers a wide range of topics and he has received numerous accolades from renowned universities. He joined #PolyU’s Department of Chinese and Bilingual Studies in 2015 and helped set up the Research Centre for Language, Cognition and Neuroscience in 2019. He hopes to engage in cross-disciplinary research, and use psychological and brain-imaging techniques to examine language-related issues in the brain, so as to help address society’s urgent challenges brought about by the ageing population.

Chair Professor of Language and Cognitive Sciences, Department of Chinese and Bilingual Studies