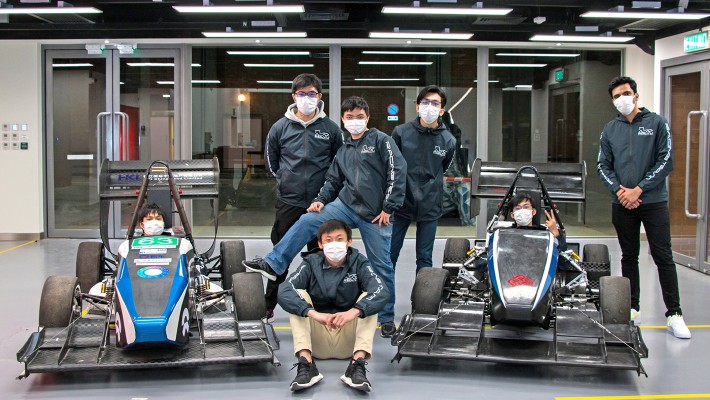 Members of the PolyU E-Formula Racing Team, led by Captain Brian Tam of the 2020 Season, have demonstrated their aspiration, creativity and endurance through designing and building their own race car for the Formula Student Electric China (FSEC) competition despite COVID-19 restrictions.

“To make sure the car building process could continue, some members who were outside Hong Kong switched to small-scale assembling at home using components they ordered online,” Karan Patel, the team’s Technical Director for the 2021 Season, said. “They then posted the finished parts to the campus or brought them with them when they later flew back to Hong Kong.”

“Members in Hong Kong took turns doing the fabrication work in small batches because of the group gathering ban. There were also alumni members who would come back to campus after office hours and work late into the night,” Tam said.

Although the team was not able to take part in the competition in 2020, they successfully organised a virtual rollout ceremony to showcase their car in January 2021.

The PolyU E-Formula Racing Team, established in 2015 by nine mechanical engineering students, is the first racing team formed by university students in Hong Kong to participate in the FSEC competition. The team currently consists of more than 40 students from various disciplines, including engineering, computing, business and design. It has gained support not only from the University’s Faculty of Engineering and the Industrial Centre, but also from advisors from motorsport industries and various sponsors.