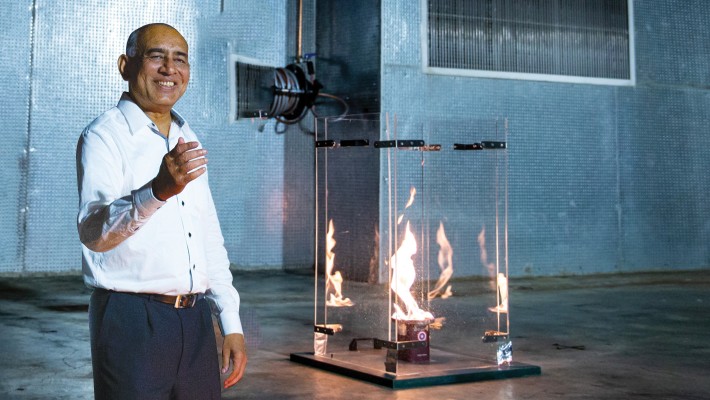 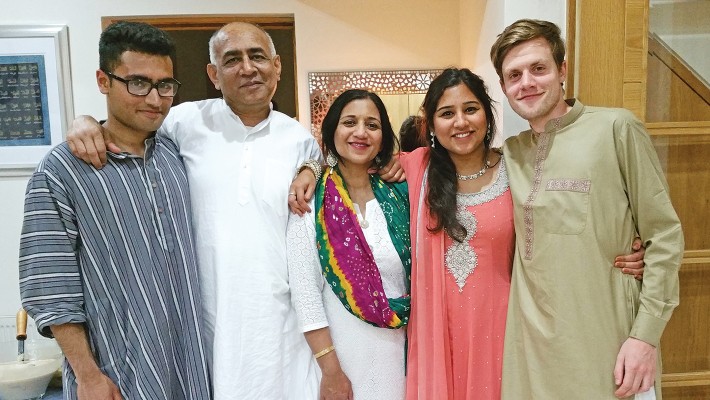 For someone who has spent his career working in structural engineering and fire safety, the 9/11 terrorist attacks in New York stand out as a pivotal event. Professor Asif Sohail Usmani, Head of the Department of Building Services Engineering, particularly remembers that many of the firefighters who died that day were killed after entering the World Trade Center Twin Towers shortly before they collapsed. “They had no clue what was going to happen. Firefighting is still a relatively conservative field and there haven’t been significant changes in the way it is done for a long time,” Professor Usmani says.

His current research focuses on forecasting in real-time how fires will behave, to enable firefighters to be better informed about the hazards they face. After being awarded HK$33 million for his project “SureFire: Smart Urban Resilience and Firefighting” by the Theme-based Research Scheme of the University Grants Committee last year, Professor Usmani is leading an international team to conduct this research in fire prediction, prevention and control, and emergency management.

“We have proposed using artificial intelligence (AI) technologies to predict the growth of fires in large buildings, just like weather forecasting, albeit on a much shorter time scale,” he explains. He adds that fires are too complex for computers to analyse in real-time. As a result, the project will investigate whether AI can be used to match live fires to ones that have been previously simulated, to predict how the fires will develop. “We want to make sure cities like Hong Kong have state-of-the-art, smart firefighting.” The research project is the latest in his long career combining structural engineering, computational methods and fire safety.

Professor Usmani’s predominant research interest over the past 20 years has been to understand the thermo-mechanical behaviour of structures in real fires using analytical and computational methods validated with experimental data. The aim of this work is to move away from the prevalent prescriptive practice for the design of structural fire resistance by developing new and rational design methods in which realistic representations of demand (fire and loads) are set against scientifically-robust estimates of structural capacity (resistance) in order to ensure a reliable performance.

He has found that the prevailing one-size-fits-all approach to fire resistance design is potentially unsafe, and he has introduced an alternative approach for large structures. This approach was used by Arup in Plantation Place, London. The structure met all safety standards while saving £250,000 in fire protection costs. Large consulting firms have since applied this approach to many of their projects.

Professor Usmani became interested in architecture and engineering at an early age walking to primary school flanked by the Red Fort and the Jamia Mosque in Delhi, India. His father taught civil engineering at the Karachi Polytechnic in Pakistan, and Professor Usmani remembers being fascinated by a town planning project his father did with his students.

After studying civil engineering at university, he worked in Saudi Arabia, before going to Stanford University to do a Master of Science in Structural Engineering. It was while he was at Stanford that Professor Usmani first became interested in the finite element method, a mathematical technique that is used to analyse large and complex structural frameworks. He went on to do a PhD in this area at the University of Wales.

Professor Usmani’s research on fire safety began in 1995 when he took up his first lectureship at the University of Edinburgh, when he used the finite element method to see if the behaviour of steel-frame buildings in fires could be predicted.

PolyU is an exciting university with an amazing future ahead as a leading research university, particularly in infrastructural engineering.

Working in the best place in the world

After working in Edinburgh for more than 20 years, an opportunity arose for Professor Usmani to join PolyU. “I think my career path has finally brought me to the best place in the world. I love civil infrastructure and buildings and high-octane urban environments,” he says.

He has been particularly impressed by graduates from the Department of Building Services Engineering. “When I go out, I am amazed to see how many of our alumni are running Hong Kong. I would say 50% of Hong Kong’s building services engineers are probably graduates of PolyU.” *

A curiosity for life and languages

In his spare time, Professor Usmani has a passion for languages. He already speaks English, Hindi, Urdu, as well as some Persian, Arabic and French, and he is currently learning Putonghua. He also enjoys taking city breaks with his wife, and tries to visit his son and daughter, both in their 20s and working in London, once a year.

Professor Usmani says he has always been driven by curiosity, and his advice to students is to keep their eyes open for new opportunities and find a niche they can explore. “While the world is becoming more competitive, there are a great deal of opportunities becoming possible with the growth in new knowledge and technologies,” he says.

*The Department of Building Services Engineering has nurtured more than 10,000 graduates since it was established in 1981. Graduates have worked in the fields of consultancy, contracting, operations and maintenance, and facilities management, for employers including the Government, developers, builders and public utilities.