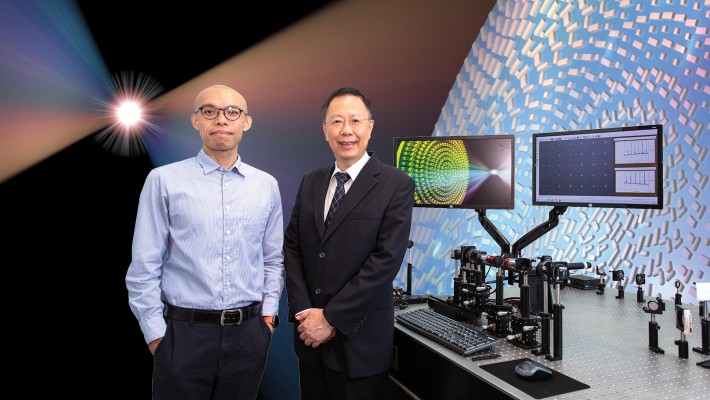 PolyU is the first in the world to make a meta-lens array quantum optical chip that is tiny, precise and high dimensional, opening the way for further advances in quantum computing.

From Silicon Valley in California to Shenzhen, China, leading IT companies across the world have been looking for the key that will take quantum computing to the next level. Now, a team of Chinese researchers led by Professor Tsai Din-Ping, Chair Professor and Head of PolyU’s Department of Electronic and Information Engineering, have developed an approach that promises to unlock the full potential of this exciting new technology.

Although still in the early development stages, quantum computing has been widely heralded as the most significant advance in computer technology since the invention of the transistor. Once this technology has matured, it could lead to major breakthroughs in the quest for new life-saving drugs, alternative forms of energy, hacker- proof data encryption, and so much more.

But what exactly is quantum computing? Essentially, it is a form of computing that harnesses particles such as electrons and photons to perform highly complex calculations. Quantum computers are so powerful, in fact, that they can solve lengthy mathematical problems in less than one second rather than the thousands of years needed by an ordinary computer.

Governments and companies like Google, IBM and Microsoft understand that quantum computing is the future and are pouring hundreds of millions of dollars to perfect the technology. Yet getting there will require overcoming a number of seemingly insurmountable challenges.

For one, the results are not always reliable. Qubits are famously unstable, as even the tiniest amount of vibration or a slight change in temperature can throw off its calculations. Quantum computers also generate tremendous amounts of heat, so in order to perform accurately, they must be operated in room-size freezers at temperatures many times colder than deep space.

These challenges may be daunting but they could soon be resolved thanks to an innovative new approach developed by Professor Tsai and his team.

How quantum computers work their magic

In a traditional computer, all information is based on a “bit” (or binary digit), which can be either 0 or 1. That email you wrote, the TikTok video your kids uploaded, or the online newspaper you read this morning, all come down to the 1s and 0s that make up the long streams of binary data your computer depends on. 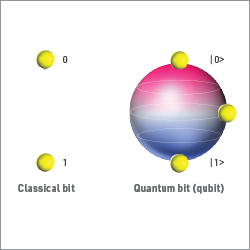 A qubit can be both 1 and 0, or anywhere in between, at the same time.

Quantum computers, on the other hand, run on “qubits” (or quantum bits), which are derived from the quantum state of sub-atomic particles. Unlike ordinary bits, they can be both 1 and 0 — or anywhere in between — simultaneously (known as “superposition”). This is accompanied by “entanglement”, a somewhat enigmatic phenomenon in physics where two particles share information about each another. When two particles such as photons (the basic unit of light) are linked this way, they can perform a vast number of calculations far beyond the capability of today’s most powerful supercomputers.

Let there be light

Zooming in to reveal the antennae in the chip

The concept behind their approach is based on a series of miniature “meta-lenses” composed of extremely fine antennae for capturing photons from a laser beam and focusing them on the same point.

“The design principle is very simple,” says Professor Tsai. “We made very small antennae and placed them on a surface made of gallium nitride, a semiconductor material known for its excellent optical quality.

“We made each antenna as ‘nano’ as possible, because that gives you the precise ability to control light at a very fine level.”

A typical nano antenna developed by the team measures 45 nanometres (width) x 80 nanometres (length) x 800 nanometres (height). More than 250,000 of these tiny antennae went into the composition of one lens, which measures 100 microns in diameter, about the size of a human hair. To demonstrate how their approach works, the team designed and fabricated a 1mm x 1mm optical chip with an array of 10 x 10 lenses containing a total of 25 million antennae, each in a different size, dimension and orientation, and all integrated with a nonlinear crystal , which can polarise incoming light.

When a laser beam is focused at the centre of the nonlinear crystal, each meta-lens on the chip will generate two photons from one photon. In a series of experiments, the team demonstrated that the multi-photon pairs are superimposed and correlated with each other.

The high-dimensional quantum entangled optical chip that resulted from this exercise is the first in the world, opening the way for further advances in quantum computing.

Power to the nth degree

Entangled photons are critical for quantum information as they are capable of generating millions more bits than a traditional computer. In the past, however, this was extremely difficult to achieve with quantum computing.

“Before, when people attempted to make a high dimensional quantum chip this way they had to do it with a laser beam that split many different times through different crystals,” says Professor Tsai. “It was almost impossible for them as the laser light died down every time it went through the crystals. And the setup is bulky. 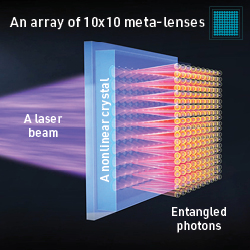 “But we were able to do it with one crystal in one tiny chip — a world first.”

Why is this so significant? Mainly because the number of bits generated is high dimensional (an extremely large number of dimensions, d plus 1).

“We now have traditional style computers of 64 bits,” says Professor Tsai. “Their computational power is 264, but with our 10 x 10 array meta-lens, it is much more than 2100. Even more promising, we believe our approach can easily achieve even greater computational power.”

What’s more, during trial runs Professor Tsai’s team was able to obtain a fidelity rate of nearly 98.4%, which confirmed the feasibility of their quantum entangled optical chip. In addition to this, the chip can operate at room temperatures, eliminating the need for liquid helium or nitrogen cooling systems and ultra-high vacuum facilities.

A breakthrough with revolutionary potential

Although the chip is still in the development phase, its revolutionary potential was recognised by one of the world’s top scientific journals, Science, which published a paper co-authored by the team, “Metalens-array–based high-dimensional and multiphoton quantum source”, in June 2020.

This recognition was highly encouraging for Professor Tsai and his team, who believe commercial applications for this compact and reliable chip may not be far off. “Our research will help quantum information science realise many applications in our daily life in the future,” Professor Tsai says. 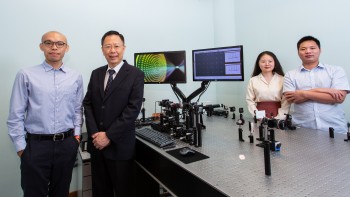 “One example is cashless payments. At the moment, when you make a transaction, a security code is generated randomly with 2 bit computing (1s and 0s). The current maximum would be 4 or 5 digits. With quantum computing, the code generated would be much longer and virtually impossible to break.”

A workable quantum computer, however, is not likely to replace your smartphone anytime soon. Yet because of the advances made by the PolyU team, commercial applications may be closer than previously thought.

“The revolution comes from here, with our chip,” says Professor Tsai. “It truly is a technical breakthrough.”