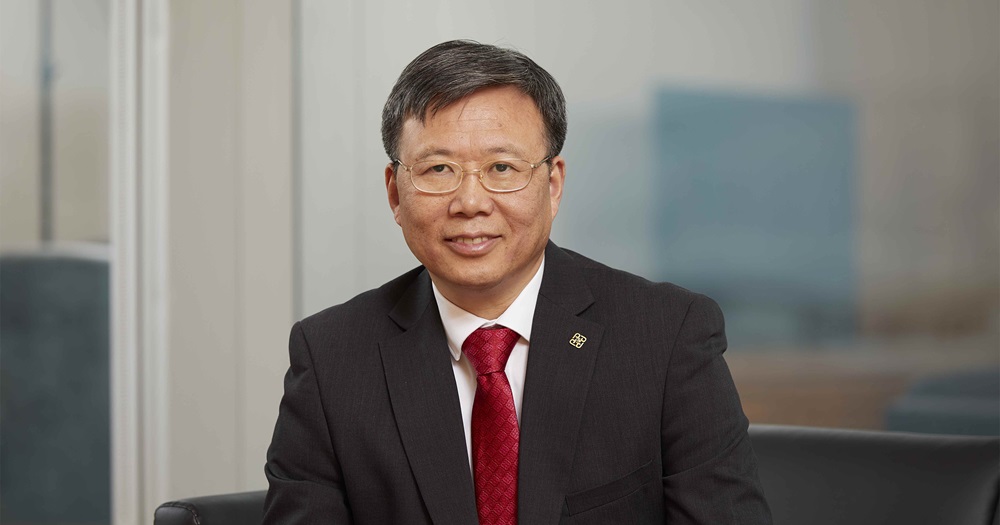 A well-accomplished and distinguished scholar in the field of structural engineering, Prof. Jin-Guang Teng, today takes the helm of PolyU with a five-year term. 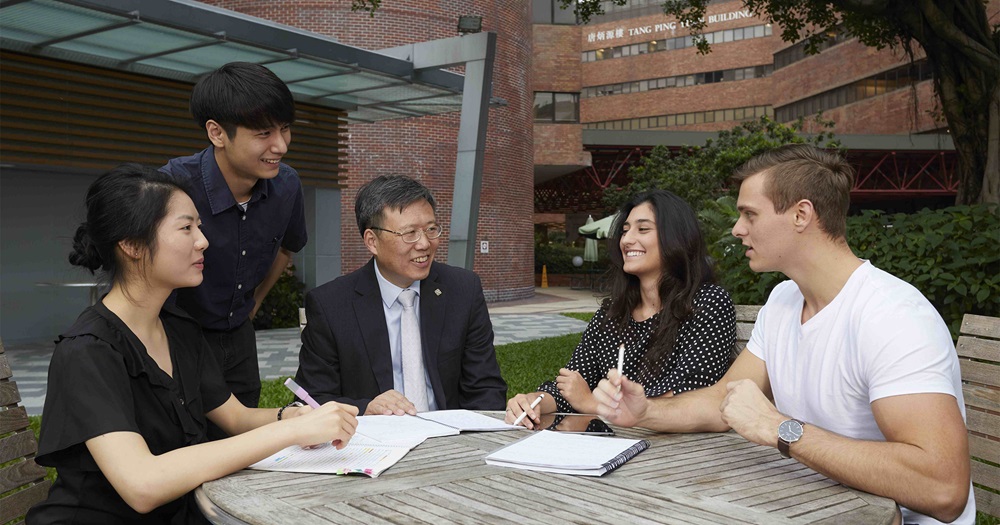 Prof Jin Guang Teng believes the role of education is to instill positive values in the next generation and equip them with all-round capabilities to change the world for the better. 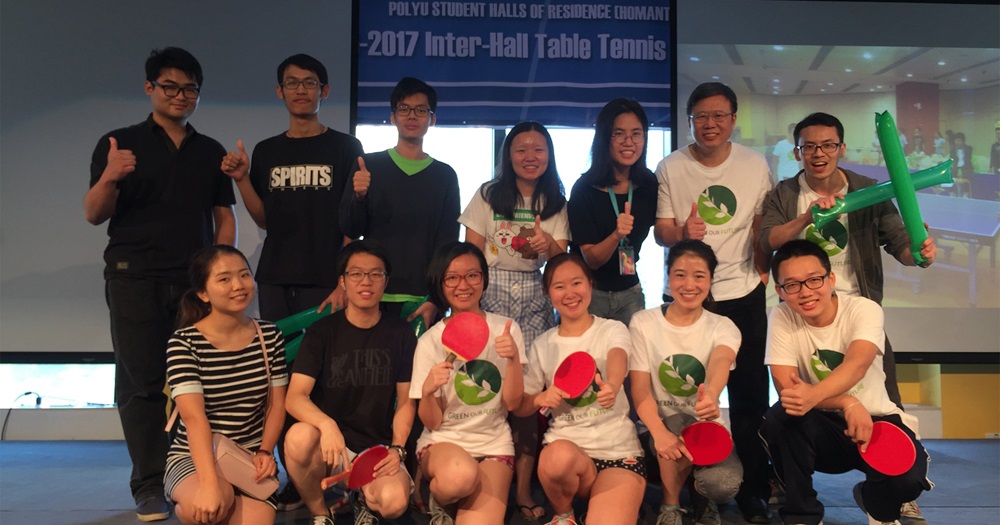 As a Hall Warden of PolyU’s Student Halls of Residence, Prof. Jin-Guang Teng (back, 2nd from right) enjoyed the time with his students.

The new President of The Hong Kong Polytechnic University (PolyU), Prof. Jin-Guang TENG, takes office today. Over the next couple of months, he aims to build connections with students, faculty, staff, and alumni through different engagement opportunities. He will also meet with different internal and external stakeholders to understand the dynamics and to communicate his thoughts and plans for the future development of the University.

In his message to the staff members, students and alumni of PolyU, Prof. Teng said, "While it is a great honour that I assume the role of President of PolyU, I am also fully aware of the huge responsibilities and demanding expectations associated with the position."  He pledged to make every effort to fulfil PolyU's mission and to deliver the University's vision.

Prof. Teng said, the role of education is to instill positive values in the next generation and equip them with professional competences to change the world for the better. PolyU aims to nurture professionals and leaders with a strong sense of social responsibility, innovative capability, critical thinking and effective communication skills. Over the years, PolyU's graduates have gone on to lead in a range of industries and professions, making contributions to the development of society.

He pointed out that PolyU, ranked among the top 100 universities globally, is already a world leader in a significant number of disciplines; therefore, the University can further develop its other areas of strength so as to assume a world-leading position in those areas too. To make this happen, the University will proactively recruit top talents from around the globe and continue to enhance its research environment. The University will also strengthen interdisciplinary research collaborations and industry partnerships, particularly in emerging areas resulting from the development of new technologies such as artificial intelligence and robotics, so as to make greater contributions to the sustainable development of Hong Kong, the nation and the world.  PolyU's research outcomes will continue to create a positive impact in business, industry and the community as knowledge transfer is a core element of its mission.

PolyU will seek to elevate the level of its global engagement and impact in the coming years. The University will leverage its extensive international network to not only advance academic exchanges, but also increase its students' understanding and appreciation of cultural diversity and broader social issues for enhancing their international perspectives.   Closer to home, PolyU embraces the opportunities brought about by the Greater Bay Area (GBA) development, serving not only the long-term interests of PolyU but also those of the GBA as a whole. Enhancing the role in the GBA will be one of the strategic focus areas of Prof. Teng in the coming few years. He will lead his team to work closely with other GBA cities to nurture talents, pursue research excellence and transfer knowledge.

Prof. Teng started his long association with PolyU in 1994, the year when Hong Kong Polytechnic assumed full university status. Over the years, he has been in various capacities including educator, researcher, hall warden, and administrator."PolyU has provided me with a favorable and stimulating environment for my personal growth and career development over the past 25 years, and I hope that PolyU will provide our students and staff with an even better environment for development in the future."

The PolyU Council announced in March 2019 the appointment of Prof. Teng as its new President with a five-year term of office from 1 July 2019.

Prof. Teng received his BEng Degree from Zhejiang University in 1983. He then pursued further studies in Australia and the United Kingdom. He had served at James Cook University of North Queensland before joining PolyU. A well-accomplished and distinguished scholar in the field of structural engineering, Prof. Teng's publications have been widely cited by researchers around the world, and many of his research findings have been adopted by relevant design codes/guidelines in China, Australia, Europe, the United Kingdom and the United States. He was elected in 2017 as Academician of the Chinese Academy of Sciences, which is the highest academic title in the field of science and technology in China; Corresponding Fellow of the Royal Society of Edinburgh in 2015; and Fellow of the Hong Kong Academy of Engineering Sciences in 2013. 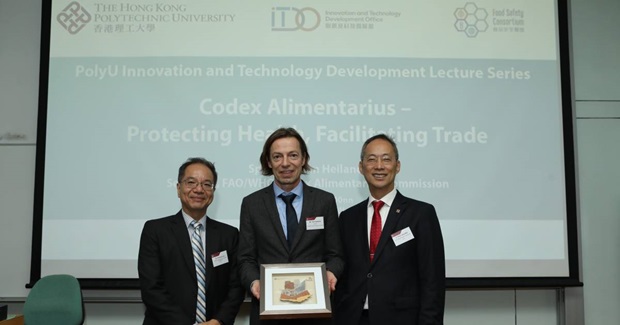 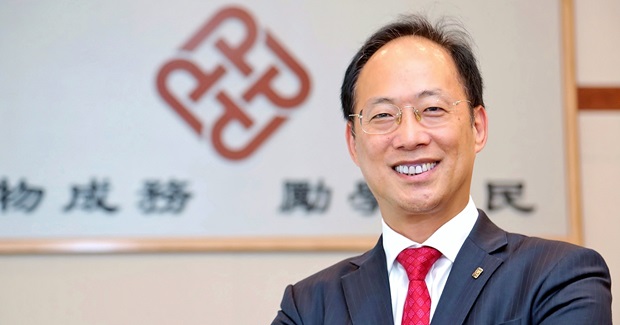