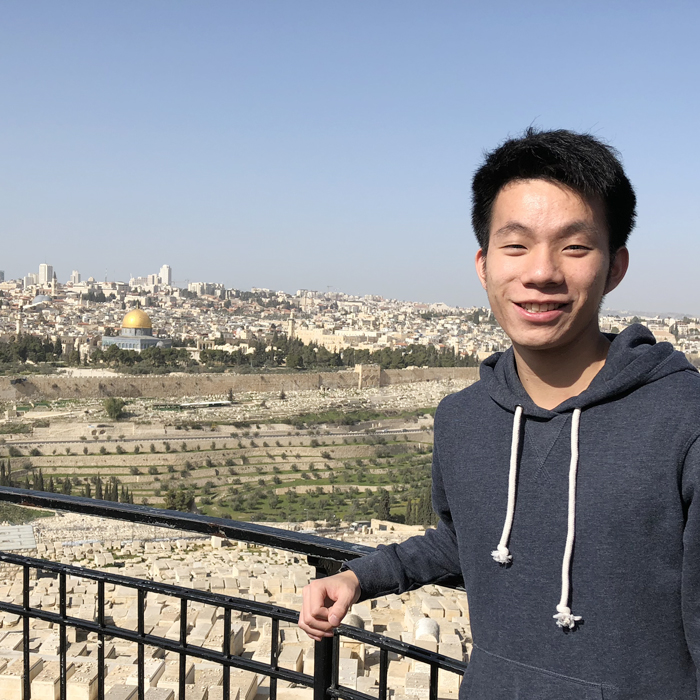 Dicky is studying in PolyU and participating in the 1-year SOAR Youth Leadership Programme (SOAR) in collaboration with Peking University. With the programme, he went to Beijing, Yunnan and Israel this academic year. He has also launched a one-to-one companion programme. Hear out what he says!

“I joined SOAR Youth Leadership Programme 2018/19 and went to Beijing and Yunnan for our first SOAR education trip in July 2018. It was such a remarkable experience, because throughout the 20 days in the two cities, I leant much more about the concept of ‘service leadership’, which inspired me to help the others with my ability in the future. In Beijing, we attended the Global Youth Leaders Summit. Within the four days, we formed an international project group with students from Denmark, USA, Taiwan, Mainland China and Hong Kong, We were required to come up with a social project to tackle the problem of poverty from scratch. It was truly amazing to meet each other and exchange opinions regarding the issue. As we were from different backgrounds, our working styles greatly differed. It therefore was inevitable to encounter disagreements and conflicts during the process. However, we managed to resolve the conflicts and eventually, completed a project that everyone was satisfied with. I am glad to have this opportunity to understand other countries’ friends and have close collaboration with them within the summit.

After coming back from the trip with some insights, my team wanted to contribute to the society with the spirit of ‘service leadership’, and decided to carry out a project that serves the intellectually disabled adults. With online research and onsite visits, we discovered that this target group, especially those who lives in the residential centres, lacks accompany. Therefore, we initiated a one-to-one companion programme for them, so that we can meet their psychological needs and make them feel less lonely. This programme is now continuing and we have already paid out our first visit in mid-March 2019.

The second learning trip in Israel in January 2019 was definitely one of the most amazing trips that I have been to. Israel is a country that fills with innovation, rich history, and a diversity of cultures. Talking about its innovation, we visited the Innovation Centre and were introduced to some cool innovations to solve social problems. For example, the ‘Watergen’ is a machine that provides clear water extracted from water vapour in air to the front-line soldiers. This machine was invented by an ex-soldier, who suffered from a lack of water when he was a frontline soldiers back then. I was truly amazed by how Israelis turn problems into potentials, and are willing to innovate something new to solve the current problems. Besides innovation, I also gained a more thorough understanding about the Jewish-Arab relation. I believe that despite the face that the two races may have conflicts at the border, harmony can still exist. When we were visiting the Arab and Jewish Center in Haifa, we walked into the community. Out of our surprise, we found that Jews and Arabs can in fact be friends, neighbours, or even couples. I also realised that there is no definite right or wrong answer; it all depends on the different perspectives on one same thing. When both Jews and Arabs are claiming the sovereignty of the same piece of land (i.e. Israel), in fact both sides may be historically correct. The only difference that causes the dispute could be the period of time that they are looking at. Therefore, I really hope that one day, the Jewish-Arab conflict can be alleviated, and the people in the whole Israel, regardless of their races, can live harmoniously.

From what I learned and experienced in Israel, I gained valuable inspiration. I am readier and better equipped to serve people worldwide, especially in our coming service-learning trip to Kyrgyzstan in the coming summer.”