The Story of a Clinical Practitioner, Researcher and Entrepreneur

Having an enthusiasm for solving clinical problems with biomedical knowledge, Toby enrolled for the BSc (Hons) course in Biomedical Engineering with Prosthetics and Orthotics at PolyU in 2016 following his return from Australia, and he graduated in 2020. Being named on the Dean’s Honours List, he has acquired a plethora of student, research, and entrepreneurship achievements. 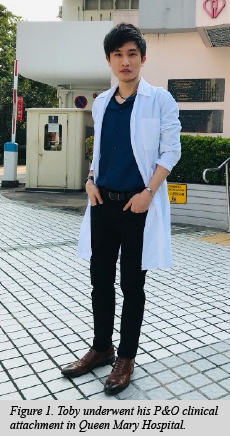 The Road to Becoming a Clinical Practitioner and Researcher

Toby always aspired to become a frontline clinical practitioner to help the needy, and therefore, he became one of nine students studying an additional specialist area in Prosthetics and Orthotics (P&O) during Year 3. Through his clinical attachments at Queen Mary Hospital, he discovered the clinical shortcomings in knee osteoarthritis (KOA) disease management. Due to the multifactorial nature of the disease, an accurate KOA prognostic model is lacking. Hence, doctors struggle when improvising with personalised treatment, which often leads to poor treatment outcomes for KOA patients.

In light of this unacceptable situation, Toby took the unilateral decision to leverage the self-learnt artificial intelligence (AI) tool to develop “A Time-dependent Machine-learning-based Prediction System for Progression of Knee Osteoarthritis” as his Capstone Project under the supervision of Dr Chunyi Wen, Assistant Professor from Department of Biomedical Engineering. This AI-based system utilises multiple layers of medical data to provide a thorough analysis that helps predict a person’s likelihood of developing KOA with interpretable results. Within four months, the prognostic model was developed with state-of-the-art precision of over 80%, which could prove to be a valuable tool for devising accurate and personalised KOA therapeutic plans. 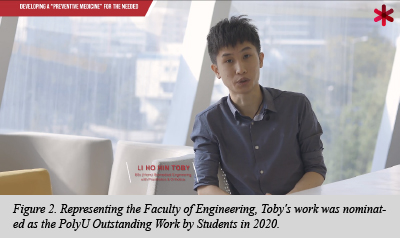 Because of this project, he was invited to present at the 2020 OARSI World Congress on Osteoarthritis in May and authored two scholarly papers later that year. Representing the Faculty of Engineering, his groundbreaking research was also nominated as outstanding student work at PolyU. The paper was subsequently archived by the Library in 2020, being one of only 16 that were accepted.

After obtaining his bachelor’s degree, Toby continued his academia journey by pursuing a part-time MPhil in Biomedical Engineering with Dr Wen’s guidance, during which he developed a KOA prognostic model for primary healthcare to aid community-based disease screening. Apart from striving for academic excellence, he also became one of the five graduates prosthetist-orthotists to graduate that year. He is currently serving at Princess Margaret Hospital, with the aim of gaining clinical exposure and networking opportunities. 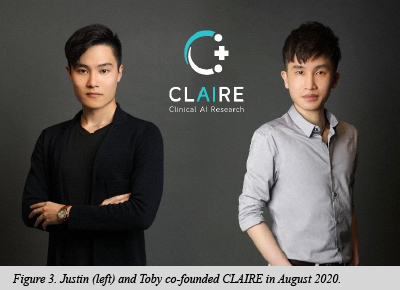 Using his undergraduate Capstone Project, in August 2020, he co-founded Clinical AI Research Limited (CLAIRE) with his business partner Justin Chan, who was also a research student at PolyU, having studied there for an MPhil in Biomedical Engineering. 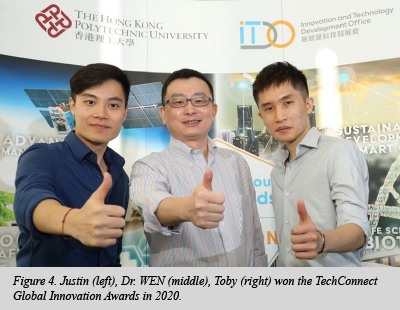 Their vision was to use AI to solve clinical problems and thereby ameliorate chronic disease management whilst also safeguarding public health. Therefore, they started to compete in entrepreneurship events against teams from PolyU and other local universities. As a result of their endeavours, they were awarded the PolyU Micro Fund 2020 and the PolyU Lean LaunchPad Programme 2020, and became the grantees of the Science and Technology Entrepreneur Programme from Hong Kong Science and Technology Parks Corporation. After participating in further international competitions, they won the TechConnect Global Innovation Awards in 2020, being one of only 13 winners out of 400 global submissions. 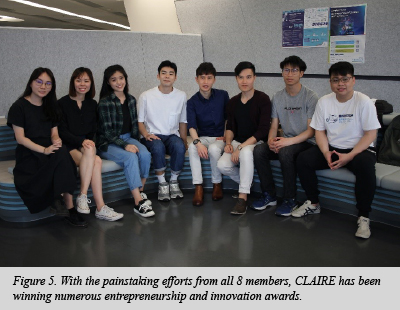 CLAIRE is now on track to become a successful start-up company consisting of 8 members from interdisciplinary backgrounds. Within the first six months of founding the company, Toby and his talented team have already convinced healthcare industry leaders, public health experts, as well as primary and secondary clinical practitioners to become collaborating partners. Their success story has meant that the company is constantly in the limelight in this specialist field, and they have received many local and international outreach opportunities, such as invitations to present at the 2020 Meet Taipei Startup Festival and the HKIE Biomedical Engineering Conference 2020, in addition to an interview invitation from Radio Television Hong Kong.