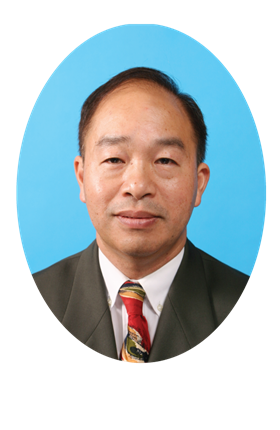 Novel Nanofiber technologies in Energy, Environment, and Health applications (Over 32 SCI papers and 7 US patents):

Nanofibre Technologies for Use in Air Filtration 用於空氣過濾的納米纖維技術

Process Technologies and Centrifugal Separation – From 1986 to 2004, Dr. Leung joined Bird/Baker-Hughes in S. Walpole, MA, USA (largest industrial centrifuge manufacturer in the world) as Senior Research Scientist and later as Director of Process Technology responsible for R&D of all solid-liquid separation equipment (nearly 100 different types) and related applications. For 15 years, he worked closely with Prof. Ascher H. Shapiro, Institute Professor of MIT and consultant to Bird, on research relating to rotating flow and centrifugal separation. Over 10 new technologies, numerous publications, and patents have resulted from the analytical, experimental, and computational research effort of the R&D team. Dr. Leung became quickly the leading authority in the world on separation and centrifugal technologies delivering courses and keynote speeches worldwide. He authored the book – Industrial Centrifugation Technology, published in 1998 by McGraw-Hill, NY, USA. The text has been used as an important reference for all those involved in any aspects of centrifugal separation.

Biotechnology and Biopharmaceutical Separation – In 2004, Dr. Leung started his own company Advantech Company in Sherborn, MA, USA focusing on biotechnology separation of drug substances and biopharmaceutical separation of proteins in recombinant protein harvest from bacteria, yeast, and mammalian cells for production of Monoclonal Antibody. He also developed classification know-how for classification and separation of fine particle by size and mass on kaolin and calcium carbonate suspension for high-quality papers.

In December 2005, he found and became Director of the Research Institute of Innovative Products & Technologies for PolyU with 20 professional staff, including 3 academic Assistant Professors, several engineers and supporting staff. Jointly with the departments of Electronics/Electrical/Mechanical/Computing Engineering, Applied Biology and Chemistry, Rehabilitation, Bioinformatics, Land Survey and Geo-Informatics, Design, and PolyU’s Industrial Centre. The Research Institute under leadership of Prof. Leung developed technologies and products related to healthcare for aged and disabled people using innovative and interdisciplinary approach to meet the unmet needs of the Society. The Research Institute has demonstrated very successful in the interdisciplinary approach led by Prof. Leung during the trial period 2005-2011 and served as road model for subsequent research institutes found subsequently in PolyU.

Since 2011, Prof. Leung continued as Chair Professor of Innovative Products and Technologies in Mechanical Engineering Department of PolyU. He has a diversified background and equally diverse research interests in science and technologies related to energy, environment, health, and innovations. Prof. Leung’s current interests are listed below:

Organic, inorganic, and biological materials can be electrospun into nanofibers 50-300 nm in diameter providing as much as 66 m2cm-3 of material. Nanofiber technologies have been applied to solar cells, air/gas filtration, air/gas purification, water purification and treatment, health applications and developing innovative technologies. 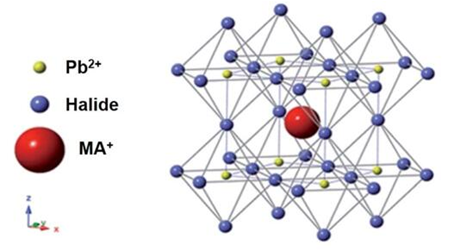 Graphene nanofibers have been introduced into the perovskite layer to produce perovskite crystals of large uniform size with high crystallinity, that harvest visible light from 350 to 800nm. The nanofibers provide nucleation sites and crystal growth. Further, photogenerated electrons can travel along the super highway offered by the graphene nanofiber to the electrode. As a result, the maximum power conversion efficiency reaches 19.83% and short circuit current reaches a high of 24.4mAcm-2. 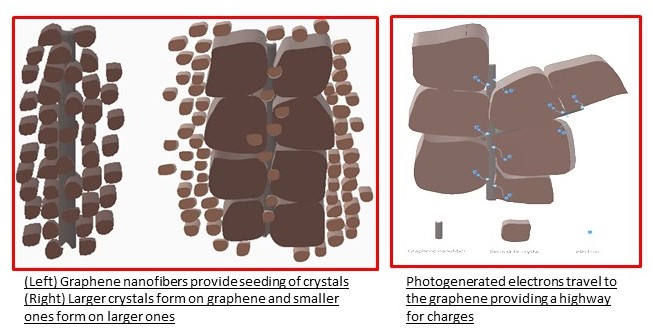 DSSC is one of the most environmental friendly solar cells due to colorful, low cost, using materials that are readily available, transparent which can be used on windows and does not take up space, and good efficiency. Despite these advantages, improvements can be made on performance. 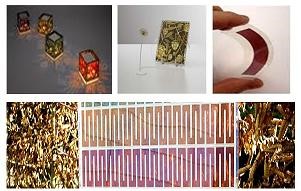 Three technologies have been developed in our group to harvest light, trap light and transport electrical charges for the DSSC:

Two complimentary dyes were used to harvest light, each having their light absorption range. As a result, the entire visible light spectrum can be harvested using the dual dyes. Further, TiO2 nanofiber was used to replace the TiO2 nanoparticles for better electron transport. The first dye was coated around the nanofiber in a thin layer while the second dye, also in thin layer, wrapped around the first dye. Both dyes harvest light independently. The photogenerated electrons from the second dye is being transferred to the first dye. The photogenerated electrons from the first dye together with the electrons from the second dye are both transferred to the conduction band of the TiO2. This cascade transfer in electrons or generally in energy provides the solar cell a high PCE of 9.48%, which is 48% higher than the conventional DSSC with only a single dye. 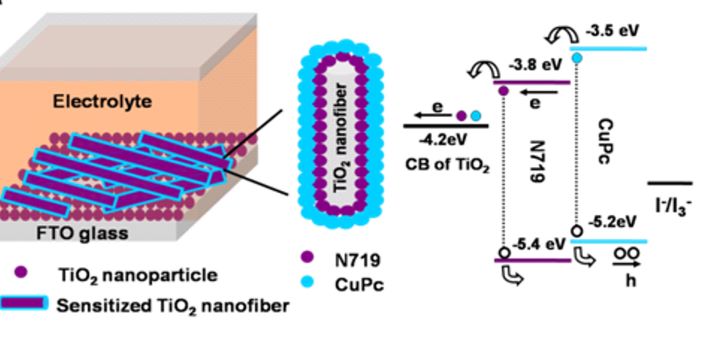 A second technology that has been developed for DSSC is the bilayer nanofiber photoanode. Instead of using a layer of nanofibers with small diameter (SNF) for light harvesting, a second layer of nanofibers with larger diameter (BNF) adjacent to the SNF layer is used concurrently for light scattering so that light can be scattered and trapped in the photoanode. The PCE can reach 9.5% with this technology. The work was published in Advanced Materials with high citations. 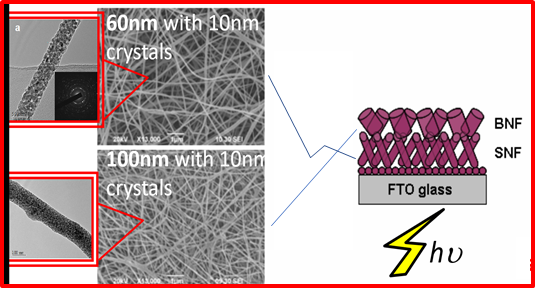 A third technology that research our group have developed on DSSC was to insert carbon nanotube (CNT) completely in the truncated nanofibers (see diagram c below) such that they can be highly conductive. As such, photogenerated electrons can be transported efficiently to the electrode reducing the chance of recombination via (a) electrons recombining with sensitized dye, (b) electrolyte in the photoanode, or (c) at the TiO2 particle-particle interface. The PCE can reach a high value of 10.24%. The work was published in Advanced Materials again with high citations. 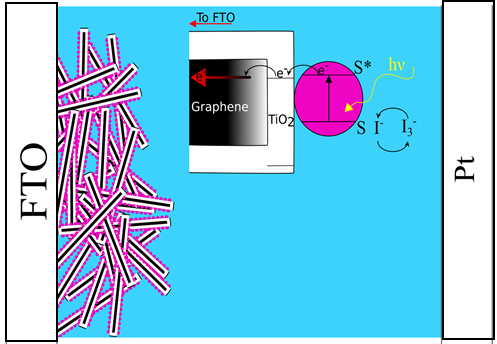 Pollutants are largely due to vehicular emissions, power plant emissions, and atmospheric reaction. Recent measurements made in Hong Kong near the cross-harbor tunnel revealed a large amount of submicron aerosols, especially aerosols less than 100 nm (also known as nano-aerosols or ultrafine particles) which are attributed to vehicular emissions and atmospheric photochemical reactions. This is consistent with testing that our group have performed in the lab also on nano-aerosols predominantly less than 100nm with aerated sodium chloride solution.

Nano-aerosols by virus of their small size can be inhaled easily into our lung from which they enter our cardiovascular system leading to various respiratory and cardioascular problems. Filters made of

nanofiber from polymeric materials (left) can effectively filter the nano-aerosols (see right figure) up to 90%. However, the pressure drop can be very large. We have developed multilayer nanofiber technology wherein the same amount of nanofibers to achive a given eefficiency has been redistributed from a single layer into multiple layers. This ensures the pores in the fiber mat to be wide open. This is especially advantageous for producing wearable face mask that stops infiltration of viruses from infectious diseases (from common cold to more severe viruses SARS, H1N1, H5N1 etc.) as well as nanoparticle pollutants from diesel/LPG vehicle emissions. This can also be used in indoor air filter to remove submicron and ultrafine particles as well as cabin filter of motor vehicles protecting health of passengers. By engineering the nanofiber technology (design, configuration, material) accordingly, the capture target (i.e. spec filtration efficiency) of a given submicron particle size under a given challenging velocity can be achieved, see efficiency vs. size for different amount of nanofibers installed in the filter. 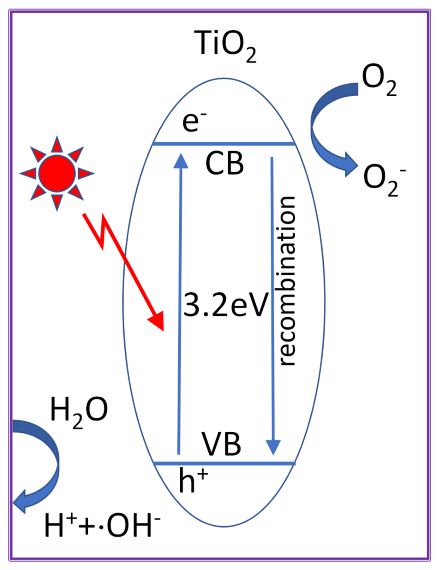 As the photocatalyst, primarily TiO2 with wide-band gap, is being irradiated by light, electrons are excited and jump from the valence band to the conduction band. Electrons can combine with the oxygen in air to form super-anions, while the holes in the valence band can combine with the water vapor in air to form hydroxyl radical. Both the superanions and hydroxyl radicals break down by oxidation the harmful adsorbed onto the photocatalyst.

A suite of nanofiber-based photocatalysts have been developed targeting at effectiveness, reduction of recombinations, and operating under visible light:

Photocatalyst integrated into flexible and rigid surfaces, washable and cleanable

Can be used for face mask and air purifier 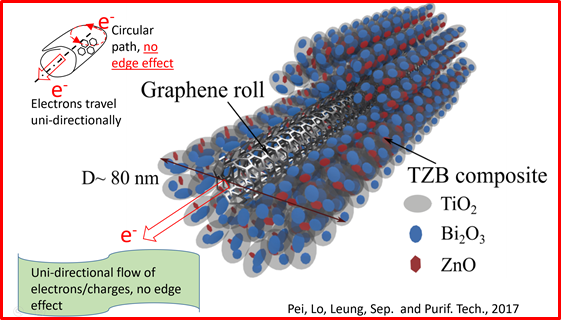 We have developed semiconductor nanofibers with embedded graphene that can be used for photonic devices such as solar cells and photocatalyst applications.

Microfluidics can simulate many chemical and biological processes taking place at a micro-scale. This brings the lab processes to a more controlled environment requiring very small sample. It is convenient for point-of-use diagnosis. By rotating the microfluidic platform in a certain way, we can carry out further separation by centrifugal acceleration and mixing by secondary flow thus intensifying the process. When mixing is intense, this facilitates cell culture and even cell lysing. We are interested in both continuous as well as batch mixing in this research. Fig. 5a shows mixing in a rotating chamber due to continuous angular acceleration of a chamber generating complicated vortices in a 3-D manner providing effective mixing.

(Left) Batch mixing in microfluidics, (Right) mixing in continuous feed through a T-channel.

Centrifugal separation of a solid from a fluid involves rotating the bowl at high rotation speed generating centrifugal acceleration acting on the heavier phase, which gravitates toward the bowl displacing the light phase toward the axis. Unexpected phenomena and flow pattern can result in a centrifuge with complicated fluid dynamics. By understanding these phenomena, better centrifuge design and operation can be developed with improved process results. 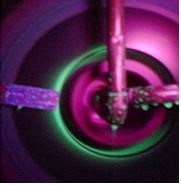 Our interest in centrifugation encompasses the following:

We are interested in innovations in water and wastewater :

We are interested to develop healthcare devices and software that can help patients and elderly through product enabled services and process innovations. This may include but not limited to intention-driven robots, electrical stimulation devices based on pain sensing, decision support system, innovative wound dressing, etc.