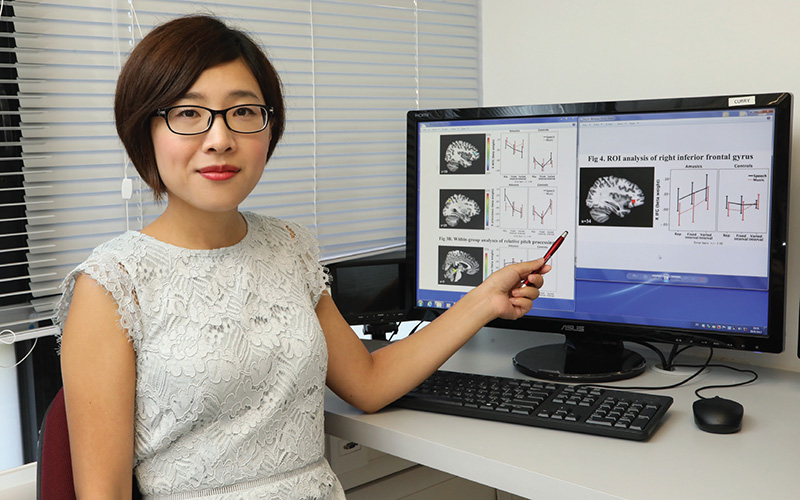 PolyU’s study has found that Cantonese speakers who suffer from congenital amusia have abnormal brain activities that affect both music and language tone processing. These differ from those observed in speakers of non-tonal languages with the same disorder.

Congenital amusia is a lifelong neurodevelopment disorder that hampers the fine-grained processing of musical pitch. In speakers of non-tonal languages, the condition arises through deficits in the music-selective neural circuitry in the right inferior frontal gyrus of the brain, and it has a mild effect on language pitch perception. Yet because pitch processing in tonal languages such as Cantonese is linguistically relevant, where pitch systematically distinguishes word meanings, there is an even greater need to know how the condition affects brain activities in tonal language speakers when they listen to music and lexical tone.

In a study recently published in the international journal Neuropsychologia, the research team led by Dr Zhang Cai-cai at the Department of Chinese and Bilingual Studies used fMRI to determine what parts of the brain were affected by amusia when participants listened to both piano and Cantonese pitch samples. The selection of Cantonese was particularly important, she explained, “because it has three level tones at various pitch heights, which can be matched with musical notes in pitch”.

The study revealed significant activation of the right superior temporal gyrus (STG) in musically intact control participants when listening to Cantonese words with tone differences, and significant activation again in the cerebellum when listening to both Cantonese words and piano tones. In stark contrast, the amusics, none of whom had hearing impairments, registered no such brain activation, leading the researchers to suggest the presence of “a dysfunctional mechanism of relative pitch processing” in the right STG and cerebellum.

However, the fMRI did show abnormally strong activation in the right middle frontal gyrus and the right precuneus among the amusics in response to both forms of pitch stimuli. This could reflect deficits in working memory or attention when these people are subjected to repeated pitch stimuli.

Researchers explained that the “Cantonese-speaking amusics exhibited abnormal brain activities in a widely distributed neural network”, unlike the situation with amusics who speak a non-tonal language. And even more importantly, as tonal languages involve a lot of pitch processing that exert much pressure on the right STG, causing it to be more fragile and making Cantonese-speaking amusics more prone to neural dysfunction in tone processing. With these insights in hand, clinicians could be able to better fashion appropriate interventions for the amusics. ♦