The world's first optical fibre sensing system for railway monitoring developed at PolyU has been adopted in Singapore metro lines.

The monitoring and maintenance of railway networks is critical to ensure railway safety. Railway maintenance can be performed after the close of operation, leaving only few hours for maintenance workers to carry out daily inspection and small scale preventive maintenance. A more efficient approach would be to continuously monitor system-critical components in both tracks and trains. A PolyU-developed sensing system can do just that, and is currently being adopted in Singapore's Mass Rapid Transit (SMRT) network. 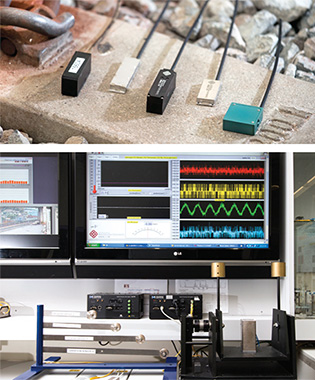 Sensors are installed in both train carriages and tracks for cross-monitoring.

The PolyU Train and Track Condition Monitoring (TTCM) System is the first in the world to include fibre-optic sensors in both passenger train carriages and tracks for cross-monitoring. The system is able to quickly identify railway defects. Warning messages are then issued to alert the railway operator of issues likely to develop in critical components such as wheel and train suspension systems, rail corrugation and rail weld joints, ensuring rapid preemptive action.

This system facilitates railway monitoring of running trains, thereby allowing more efficient maintenance, enhancing overall operational efficiency while lowering costs. Prof. Tam Hwa-yaw, Chair Professor of Photonics and Head of the Department of Electrical Engineering, commented that the University was proud to have exported the TTCM system to Singapore. It was, he said, "now the best practice in the railway industry". 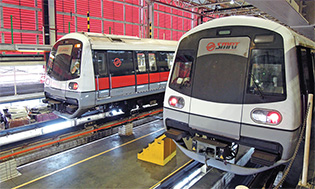 The system has been adopted in Singapore’s two busiest metro lines.

Following a successful trial run last year, a permanent TTCM system comprising six groups of Fibre Bragg Grating sensors has been adopted in the SMRT's North-South and East-West lines, the busiest in the country. PolyU is providing operational training, and will collect monitoring data from the system for real-time analysis. The University will also provide maintenance and technical support for the first five years of the system's operation.

Dr Tan Chee-keong, Deputy Director of the SMRT, remarked that he was "sure this optical fibre sensing network installed in both the tracks and running trains will enhance the operation of our metro lines". Indeed, the installation is indicative of how the University can work in close collaboration with industry players to develop world-leading technology.

The innovative technologies behind the TTCM system has received several international awards since 2000, with the latest being Third Prize in Germany's Berthold Leibinger Innovationspreis in 2014. ♦