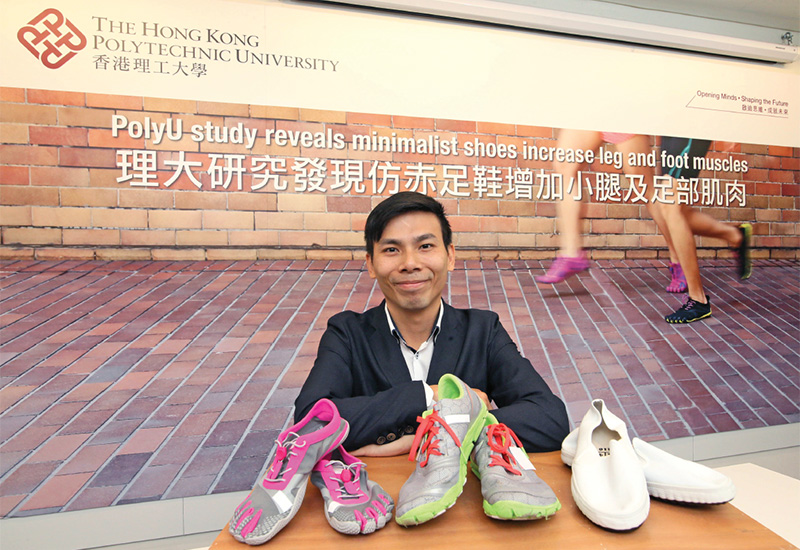 Your training shoes have ample padding and great arch support – just what you need, right? If you're a distance runner, that might not be so. Even with a wealth of shoes on the market offering everything from stability control to different forms of cushioning, there is still less than a 1% chance that any runner will last three years without injury.

A team of researchers led by Dr Roy Cheung, Assistant Professor at the Department of Rehabilitation Sciences, knew that mechanical support normally leads to muscle atrophy and wanted to determine whether removing it from shoes would benefit runners. They recruited a group of 38 runners who had been running in traditional shoes featuring heel-to-toe drop of over 5 mm, cushioning and arch support for an average of six years.

Eighteen of the runners continued to wear their traditional shoes and the remaining twenty wore minimalist shoes with separate toe compartments, zero heel-to-toe drop, no mid-sole cushioning or arch support and a 3 mm outer sole. Both groups followed a six-month programme of preparatory exercises followed by gradual progression from walking to jogging and finally running.

All running records of the runners were monitored with an online surveillance platform, and the team measured their right leg and foot muscle volume using magnetic resonance imaging before and after the programme. The results were striking – the mean volume of muscle in the forefeet of the minimalist runners increased by 11.9%, and that of the rear feet increased by 6.6%. The runners wearing the traditional shoes experienced minor muscle growth in the rear feet only.

The researchers explained that as minimalist shoes provide no mechanical support for the foot core, the intrinsic and extrinsic foot muscles that stabilise the arches are forced to work harder, leading to muscle-mass increase. Greater forces in the calf muscles may also contribute to the process, as could the need to land on the forefoot in un-cushioned shoes.

Given the prevalence among runners of planar fasciitis, a foot ligament injury, the findings suggest using minimalist shoes as an alternative to the use of orthotics in rehabilitation programmes. "Foot core training should be emphasised in the clinical guidelines in treating injury related to weak foot muscles", the research team concluded.

The research findings were published in Clinical Biomechanics, a prestigious biomechanics journal. ♦

The study finds that the more frequent runners wear minimalist shoes in running, the bigger their leg muscle volume growth.