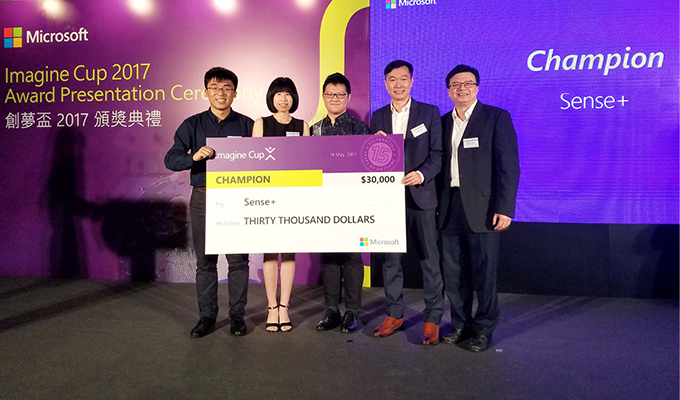 With a mobile app named “Sense+”, a PolyU student team has won the Hong Kong championship and the Most Innovative Award at the Microsoft Imagine Cup 2017, defeating 35 projects from eight local universities. Team members included Ma Ming-yu and Wang Shi from the Department of Computing, and Chang Shu-hao from the Department of Electronic and Information Engineering.

Building on Microsoft’s artificial intelligence tools, “Sense+” is a cognitive application that can enhance the quality of life of the visually impaired. It turns the camera lens in mobile phones into the “eyes” of the visually impaired, helping them to explore the surroundings, identify friends and colours, and locate personal belongings.

The winning team will represent Hong Kong to compete against 54 national teams worldwide at the final competition to be held in the United States in July.