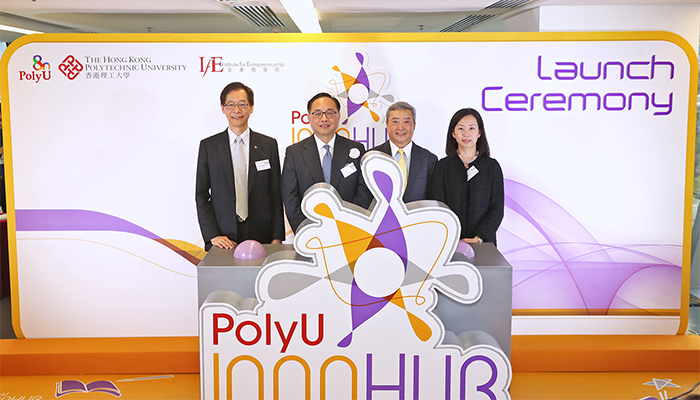 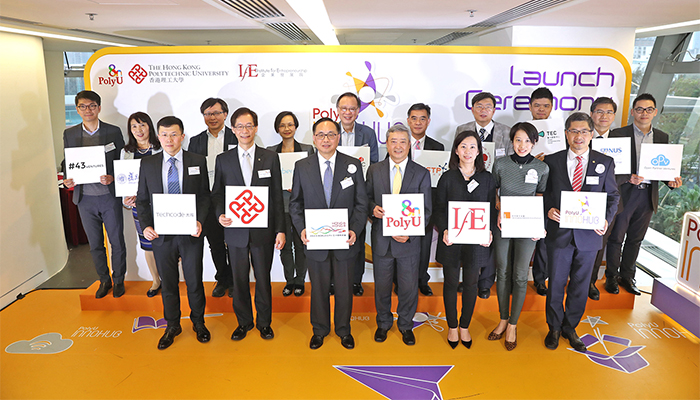 The Hong Kong Polytechnic University (PolyU) launched today (15 March) the PolyU InnoHub, a co-creation and co-working space on campus for the University community and stakeholders to further promote innovation and entrepreneurship at a regional level. It is one of the celebratory events for PolyU's 80th Anniversary.

The ceremony was officiated by Mr Nicholas Yang, Secretary for Innovation and Technology, the Government of HKSAR; Mr Chan Tze-ching, Chairman of the PolyU Council; and Professor Timothy W. Tong, President of PolyU.

Speaking at the ceremony, Mr Chan Tze-ching said, "PolyU, as a leading higher education institution in Hong Kong and Asia, is committed to nurturing young innovators and entrepreneurs with creative mind-set and global perspective."

Professor Timothy W. Tong said, "InnoHub is significant in serving as a focal point to facilitate regional partnership and further build up a regional entrepreneurship community."

Located in the Jockey Club Innovation Tower on campus, InnoHub will play a significant role as a catalyst for achieving "the 4Cs": Convergence of talents and technologies; Connection of students, academia, entrepreneurs and the industry; Collaboration of multi-disciplinary and cross-sectors projects; and a Community of practice and regional networks.

InnoHub will be open to groups including the PolyU supported start-ups, the partnering organisations and investors of the start-ups. The start-ups and student teams will also be able to access the necessary resources and business mentorship supports and pre-incubation services.

PolyU also announced the launch of the Student Entrepreneurial Proof-of-Concept Funding Scheme (SEPOC) today. The Scheme complements the conventional classroom entrepreneurial education by providing further resources, training and business mentorship to students. A proof-of-concept fund of up to HK$30,000 will be awarded to student(s) for developing prototypes and conducting market validation to their innovative ideas generated from the class.

Through SEPOC, the gap between classroom learning and real-life practice on entrepreneurship can be bridged. Under SEPOC, a funding of HK$1.4 million a year has been set aside to support up to 42 teams.

PolyU has developed a micro funding platform by operating five funding schemes with different areas and target audience. It has supported close to 200 start-ups, with over 7,600 young people trained in the area of entrepreneurship.