2015.12.10PolyU Participates in Development of Microsatellite Platform and Deployment System 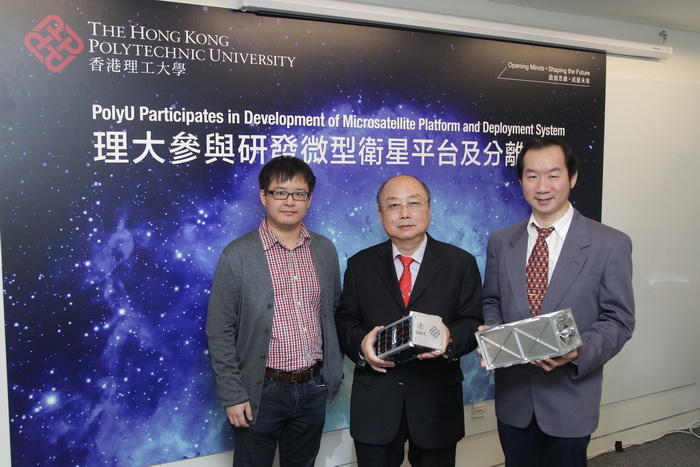 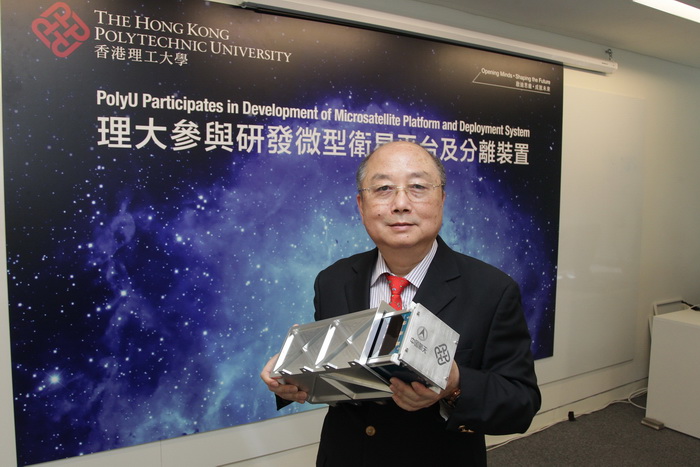 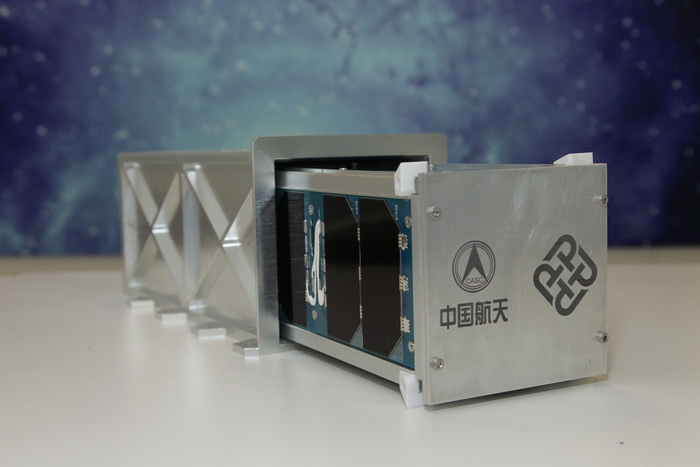 The Hong Kong Polytechnic University (PolyU) contributed to China's successful launch of "20 satellites in one rocket" of "Long March 6" on 20 September 2015. This historical mission was accomplished by PolyU and Aerospace Dongfanghong Development Ltd. Shenzhen, China (SZDFH) by jointly developing a microsatellite platform and a deployment system that was successfully applied to "Kaituo-1B", an achievement to bring low-cost aerospace technology to a wider range of civil uses. The newly developed microsatellite platform conforms to the CubeSat standards, and CubeSat is a kind of microsatellite.

Joining this historical mission is Professor Yung Kai-leung, Associate Head of PolyU's Department of Industrial and Systems Engineering and his research team. They participated in the development of the microsatellite platform and deployment system for"Kaituo-1B", which piggybacked on the SZDFH developed mother satellite "Kaituo-1A", and was successfully separated at 500 km altitude on the same day of the launch of the rocket. Not only does"Kaituo-1B" belong to the first batch of microsatellite (CubeSat) launched by China, but it also is the very first microsatellite platform and deployment system successfully developed by Hong Kong. Compared to conventional satellites which weigh from a few hundreds to a few thousands kilograms each, "Kaituo-1B" only weighs around two kilograms, which results in significant cost reduction in the development and production of microsatellite for carrying small-sized payloads and instruments into space.

The mission of "Kaituo-1B" is to perform a series of verification tests and experiments in space, including performing experiments for the "Integrated Experimental Payload" designed by Dr. Cheng Ching-hsiang, Assistant Professor of PolyU's Department of Industrial and Systems Engineering and his team. The designed life span of "Kaituo-1B" is three months, and it is expected to de-orbit eight years later and return to the atmosphere without creating any space debris.

The success of "Kaituo-1B" indicates the microsatellite technology developed by PolyU has been space flight proven, and can provide a standardized microsatellite platform and deployment system for future space research experiments. In future, researchers no longer need to spend enormous resources on satellites for small-scale space experiments. They are only required to design their own experiments module to be loaded on a microsatellite. As such, the research procedures can be hugely simplified with development cost greatly reduced. The standardization of microsatellite platform and deployment system will help to facilitate the implementation of low-cost space experiments, bringing space technology closer to the general public and general applications.

This technology can benefit a wide range of industries, including aviation, pharmaceutical industry, advanced materials, and educational sectors. For aviation, the platform provides additional resources to trace air traffic, reducing the difficulties of flight incident investigation. For pharmaceutical and advanced materials industries, the platform provides an alternate low-cost option for zero gravity experiments to expedite the development of new materials. For tertiary education sector, the platform provides more opportunities for all sorts of space environment researches. The platform can even provide secondary schools with opportunities for putting their physics experiments into space, which will hugely increase students' interests in science.

This project is another successful aerospace collaboration between Hong Kong and China. In future, PolyU will optimize the design, further reduce the weight and development cost, as well as enhance the easiness of use of the platform. In addition, PolyU will continue to collaborate with industries and education institutes to develop more space experiments with the application of low-cost space technology.

Department of Industrial and Systems Engineering