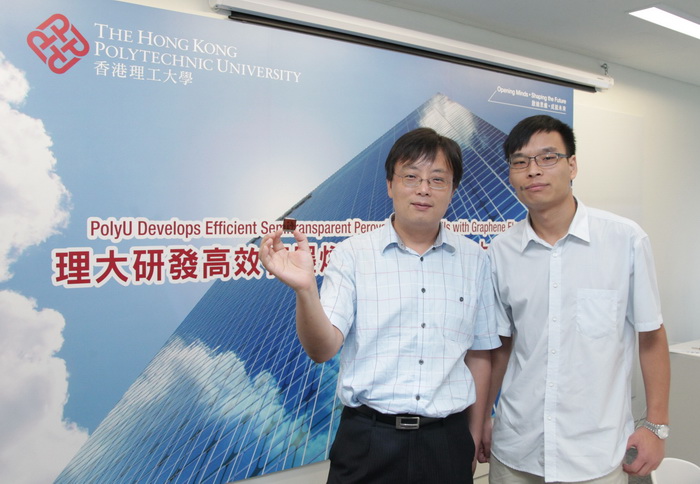 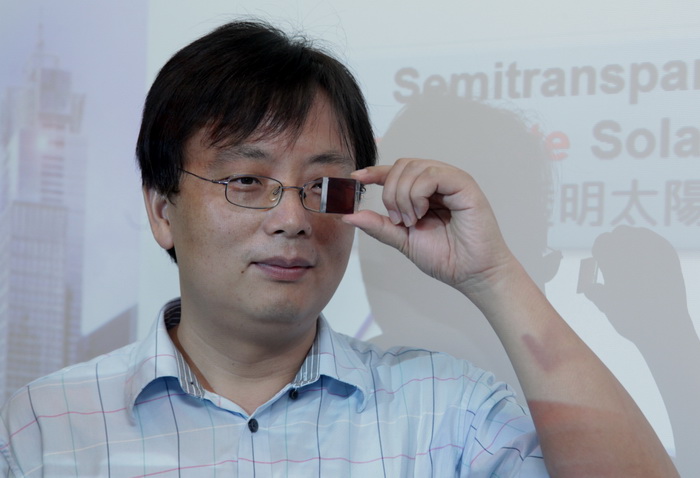 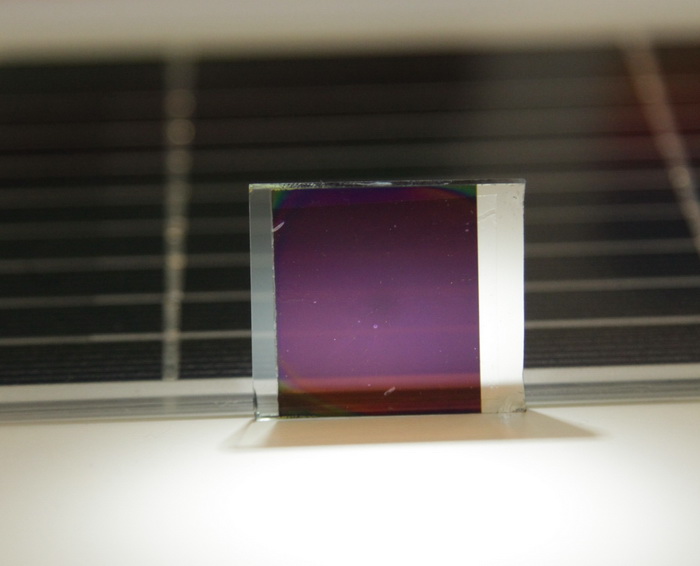 Developing transparent or semitransparent solar cells with high efficiency and low cost to replace the existing opaque and expensive silicon-based solar panels has become increasingly important due to the increasing demands of the building integrated photovoltaics (BIPVs) systems. The Department of Applied Physics of The Hong Kong Polytechnic University (PolyU) has successfully developed efficient and low-cost semitransparent perovskite solar cells with graphene electrodes. The power conversion efficiencies (PCEs) of this novel invention are around 12% when they are illuminated from Fluorine-doped Tin Oxide bottom electrodes (FTO) or the graphene top electrodes, compared with 7% of conventional semitransparent solar cells. Its potential low cost of less than HK$0.5/Watt, more than 50% reduction compared with the existing cost of Silicon solar cells, will enable it to be widely used in the future.

Solar energy is an important source of renewable energy, in which solar cell will be used to convert light energy directly into electricity by photovoltaic effect. The first generation crystalline silicon solar panel is highly stable with efficient energy conversion, but opaque and expensive. The second generation solar cell, namely thin film solar cell, is light in weight and can be made flexible. However, they are made of rare materials with complicated structure and need high temperature treatments. With the research objectives of producing solar panels of high PCEs, easy fabrication, and low cost, in recent years, scientists have been investigating third generation solar cells. Perovskite solar cell as a novel third generation solar cell has attracted much attention recently due to its high power conversion efficiency, convenient fabrication process and potentially low cost.

With the aim of improving PCEs and reducing costs of semitransparent solar panels, PolyU researcher has developed the first-ever made semitransparent perovskite solar cells with graphene as electrode. Graphene is an ideal candidate for transparent electrodes in solar cells with high transparency, good conductivity and potentially low cost. The semitransparent feature of the solar cell enables it to absorb light from both sides, and can be widely used in windows, facades, louvers and rooftops of buildings for converting solar energy into electricity, thus increasing the surface area for collecting solar energy substantially.

While graphene as an advanced material was invented more than 10 years ago, PolyU innovated simple processing techniques for enhancing the conductivity of graphene to meet the requirement of its applications in solar cells. Firstly, the conductivity of graphene was dramatically improved by coating a thin layer of conductive polymer poly-(3,4-ethylenedioxythiophene): poly(styrenesulfonate) (PEDOT:PSS), that was also used as an adhesion layer to the perovskite active layer during the lamination process. Secondly, to further improve the efficiency of power conversion, PolyU researcher found that by fabricating the solar cell with multilayer chemical vapor deposition graphene as top transparent electrodes, the sheet resistance of the electrode could be further reduced while maintaining the high transparency of the electrodes. Lastly, the performance of this novel invention is further optimized by improving the contact between the top graphene electrodes and the hole transport layer (spiro-OMeTAD) on the perovskite films.

Study findings have been published in Advanced Materials, a leading journal in material science.