2015.03.23PolyU develops a new technique for rapid detection of drugs-of-abuse 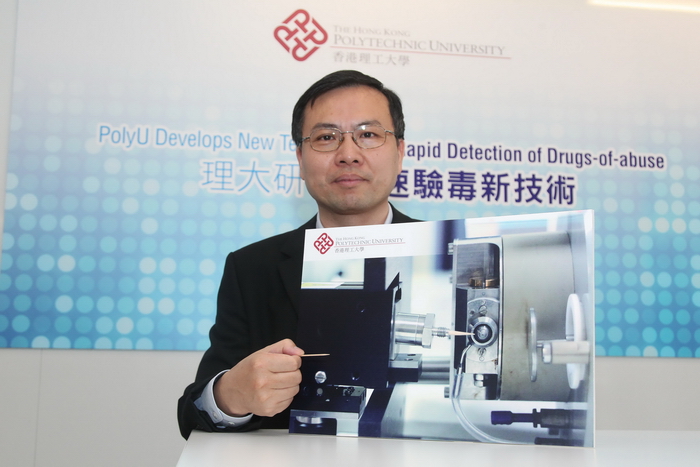 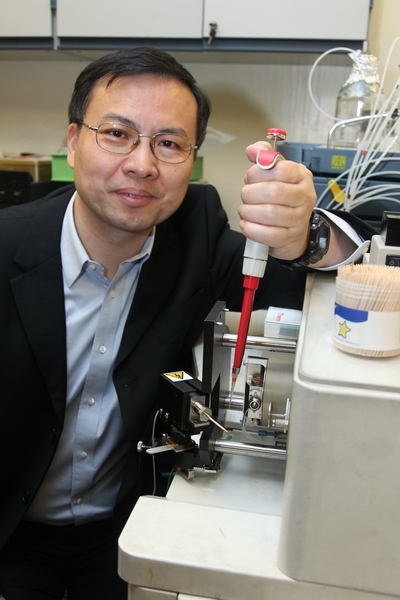 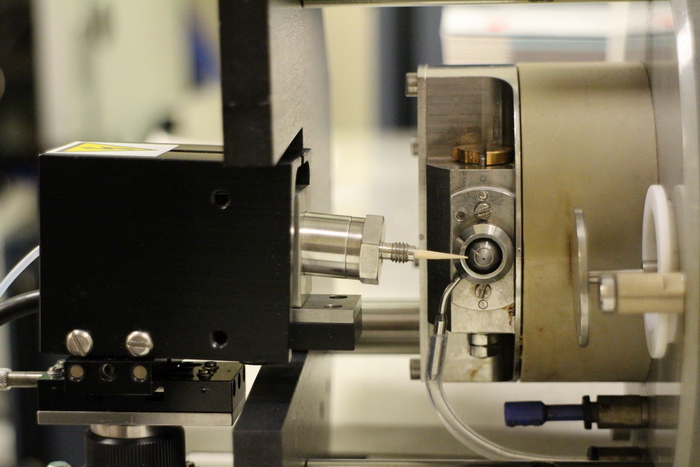 The development of reliable, convenient and cost-effective methods for drug analysis is crucial in the control and the fight against drug abuse. Sponsored by the Beat Drugs Fund, the Department of Applied Biology and Chemical Technology (ABCT) of The Hong Kong Polytechnic University (PolyU) has developed a new technique, named Wooden-tip Electrospray Ionization Mass Spectrometry (WT-ESI-MS), for rapid and reliable detection of four common drugs-of-abuse, including ketamine, methamphetamine, MDMA and cocaine. This new technique involves the application of mass spectrometry, a commonly used technology for identification and quantitation of chemical compounds. Compared to the conventional drug testing method which takes several hours to analyse one sample, this newly developed WT-ESI-MS technique can produce accurate analysis for the identification and quantitation of the drugs-of-abuse in urine and oral fluid within a few minutes. This new technique is not only simpler, faster and reliable, but also cost effective as it has significantly reduced the time and cost required for drug analysis. Besides, it also resolves the problem of generating false positive and false negative results with the conventional method.

The conventional approach for drug analysis consists of two steps: firstly the preliminary screening to deal with a large number of samples, followed by the confirmatory analysis. However, the preliminary screening, which involves the use of test kits, has the problem of producing false positive or false negative results, while the confirmatory analysis is time-consuming and laborious as extensive sample pretreatment and chromatographic separation process, a process to separate various chemical compounds in a sample, are needed before the analysis with the mass spectrometric method.

In the new WT-ESI-MS technique, common household wooden toothpicks, which are readily available in low cost, are employed to replace the conventionally used capillary for sample introduction in mass spectrometry. Wooden tips are capable of reducing interferences of other substances and free from clogging which may occur in capillary. These desirable features permit direct mass spectrometric analysis of drugs in urine and oral fluid without having to go through sample pretreatment and chromatographic separation, enabling the analysis of one sample to be completed within a few minutes. This technique significantly enhances the speed and level of convenience in drug analysis.

The research results show that the new WT-ESI-MS technique is an effective means for the analysis of ketamine, methamphetamine and MDMA in urine as well as oral fluid, and cocaine in oral fluid, with high analytical performance and reliability.

The research team at ABCT continues to develop more sensitive analytical methods for rapid and reliable drug analysis, and expand the analysis to other drugs such as cannabis and heroin. In addition, the team will develop a portable device for on-site drug analysis in the next two to three years, in order to further expedite the drug analysis process.