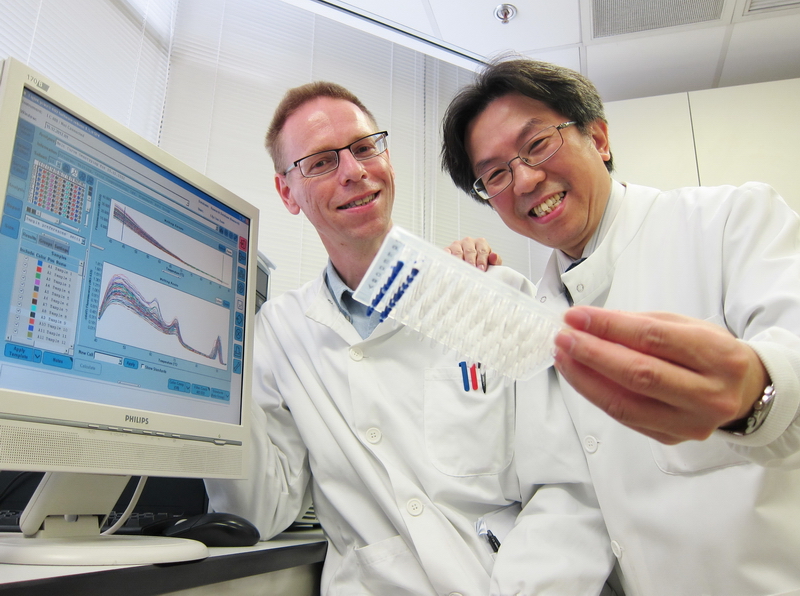 Two researchers from The Hong Kong Polytechnic University (PolyU) are taking an active role in a global study which has unlocked the genetic origin of myopia. Through their collaboration with the Consortium for Refractive Error and Myopia (CREAM), 24 genes leading to short-sightedness have been identified, thus paving the way for further research on the prevention and control of myopia.

This largest international genome-wide study was based on the meta-analysis of 45,758 subjects, including 37,382 individuals of European ancestry and 8,376 from Asian countries, with the concerted efforts of 64 universities and research institutes in 13 countries. On Hong Kong side, joining the CREAM are Dr Jeremy Guggenheim, Associate Professor at PolyU's School of Optometry, and Professor Yip Shea-ping, Associate Head (Research) of PolyU's Department of Health Technology and Informatics. Both of them are also members of PolyU's Centre for Myopia Research.

PolyU researchers also noted that over the past 30 years, the number of Hong Kong children developing myopia has risen alarmingly. This year, about 80 per cent will have the condition by the time they leave school. Similarly high rates of myopia are seen in cities on the Chinese mainland, Japan, Taiwan and Singapore.

People with myopia have longer than normal eyeballs, which result in their focusing of images in front of their retinas instead of on them. It is estimated that up to 80% of Asians and 30% of Caucasians are myopic, and high myopia can lead to blindness. Environmental risk factors may have played a large part in increasing the prevalence in Asia over the past half-century, such as children spending less time doing outdoor activities due to dense urbanisation and parental pressure to do well academically.

"It is important to identify genetic factors because they could open the door to developing drugs that can hinder myopia. We now have a long list of genes to examine in details, to find out how they put children at risk," explained PolyU optometry expert Dr Guggenheim.

Instead of recruiting subjects or families with high degrees of myopia, the meta-analyses examined data of unselected subjects from health studies, which would be more representative of people around the world.

"We have found 16 new loci of genes for refractive error in people of European descent, of which 8 loci are shared with people of Chinese, Indian or Malay descent. In addition, we have confirmed a further 8 associated loci." said Professor Yip.

The consortium also identified new candidate genes involved in possible mechanisms linked to eye growth and myopia. Some of the genes may be involved in the growth of the sclera, the white outer layer of the eyeball, while other genes may be involved in determining the strength of chemical signals generated by the retina when viewing images, which may influence the onset and progression of myopia.

According to this study, people with all the genetic risk factors have a tenfold-increased risk of developing myopia.

The findings have recently been published in Nature Genetics.

Faculty of Health and Social Sciences