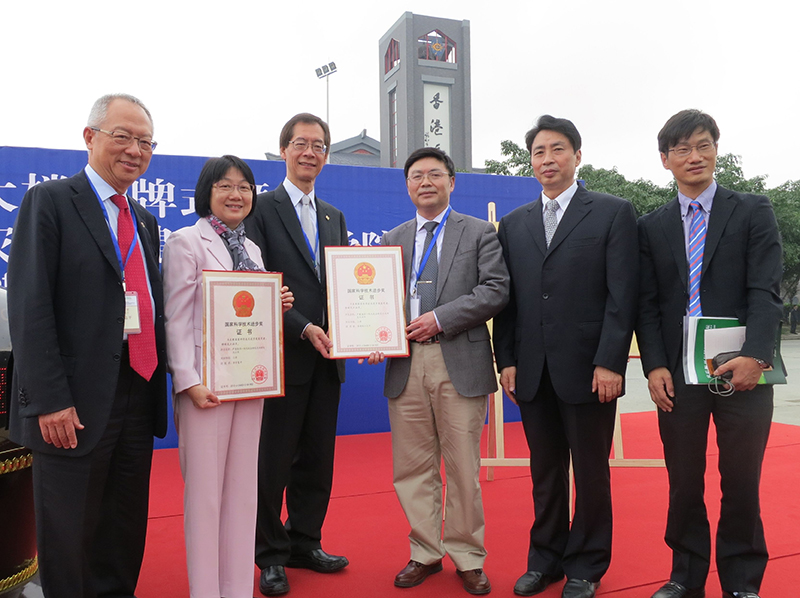 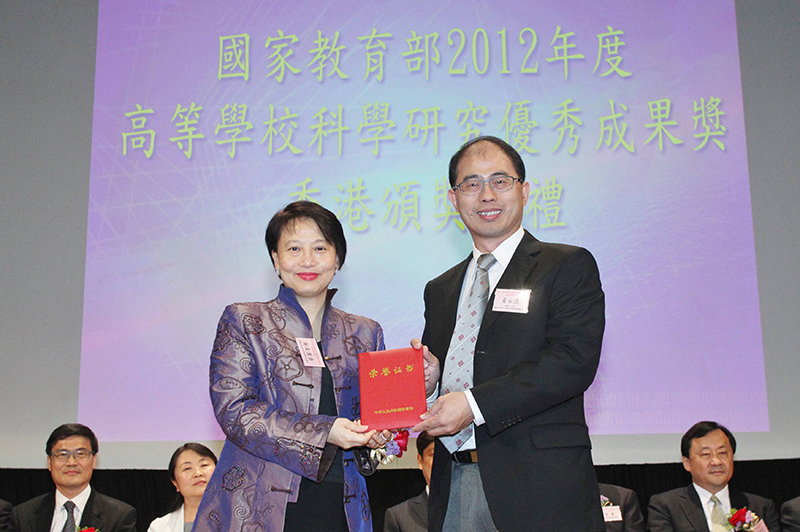 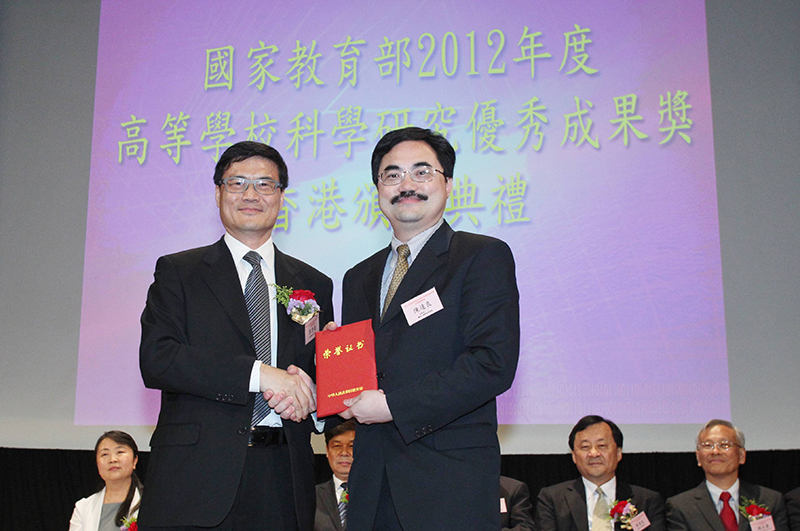 Three researchers of The Hong Kong Polytechnic University (PolyU) have been bestowed with national honours for their projects. In collaboration with her mainland partner, Professor Cecilia Li of PolyU's Department of Rehabilitation Sciences was awarded the State Council's National Science and Technology Progress Award. More recently, Professor Wong Wing-tak, Head of the University's Department of Applied Biology and Chemical Technology, and Dr Chan Tat-leung, associate professor of the Department of Mechanical Engineering, have been awarded the Natural Science Awards bestowed by the Ministry of Education today (16 May).

Professor Cecilia Li of PolyU's Department of Rehabilitation Sciences has received the National Science and Technology Progress Award 2012 (Second Class Prize) bestowed by the State Council. The winning project on the "novel technology for serious burn treatment" (嚴重燒傷一體化救治新技術的研究與應用) was led by Professor Li and Professor Huang Yuesheng, a renowned mainland expert, and involving Southwest Hospital of Third Military Medical University and several other mainland hospitals. Through this project, Professor Li and Professor Huang have made significant contributions in advancing rehabilitation technology for serious burn.

Professor Li has been very active in conducting research on burns victims and her innovative invention of Smart Pressure Monitored Suit (SPMS) and Smart Pressure Monitored Padding (SPMP) have been applied to patients with burn injuries. The first clinical trial which is funded by the GRF grant from University Grants Committee has been started in 2012. The collaboration between Chongqing No. 3 Military University and our university will further enhance this newly developed technology through this translational research project to the clinical community.

Another award-winning project is "The Development and Application of Lanthanide Luminescent Materials" (鑭系發光材料的發展與及應用), led by Professor Wong Wing-tak, Head of PolyU's Department of Applied Biology and Chemical Technology. The project is awarded the Second Class Prize in Natural Science Award bestowed by the Science and Technology Development Centre under the aegis of the Ministry of Education. It aims to design and synthesize a series of new lanthanide complexes and nanoparticles with long-excited wavelength, high quantum efficiency, non-toxicity and water solubility, and to investigate the relationship between the structure and photo-physical behavior and localization in vitro.

There is a great demand for developing fluorescence marker with high efficiency and stability for the in vitro or in vivo imaging. Professor Wong Wing-tak said, "Lanthanide ions are considered the best substitutes for the more commonly used organic fluorophores, as lanthanide complexes exhibit long-lived luminescence lifetimes, large Stokes shifts, and sharp emission peaks." Newly established lanthanide complexes have been successfully applied for organelles specific imaging, such as cytoplasm, lysosome, endoplasmic reticulum and plasma membrane.

Dr Chan Tat-leung, associate professor of PolyU's Department of Mechanical Engineering, through his long-term research collaboration team from China Jiliang University and Zhejiang University, has been awarded the First Class Prize in Natural Science Award bestowed by the Ministry of Education as the second accomplisher, for his research accomplishments and contributions on "Flow Mechanism in the Multiphase and Multicomponent Complex System with Micro-Nano Scale" (微納尺度多相與多組分複雜系統中流動機理的研究).

"It is important to understand the formation and transport mechanisms in such multiphase flows in order to achieve efficient applications in many areas of science and engineering." Dr Chan said. These challenging problems in multiphase and multi-component complex system with micro and nanoscale have been identified the areas of thermal-fluid, materials, chemical and environmental sciences, and their engineering applications.

Director of Communications and Public Affairs