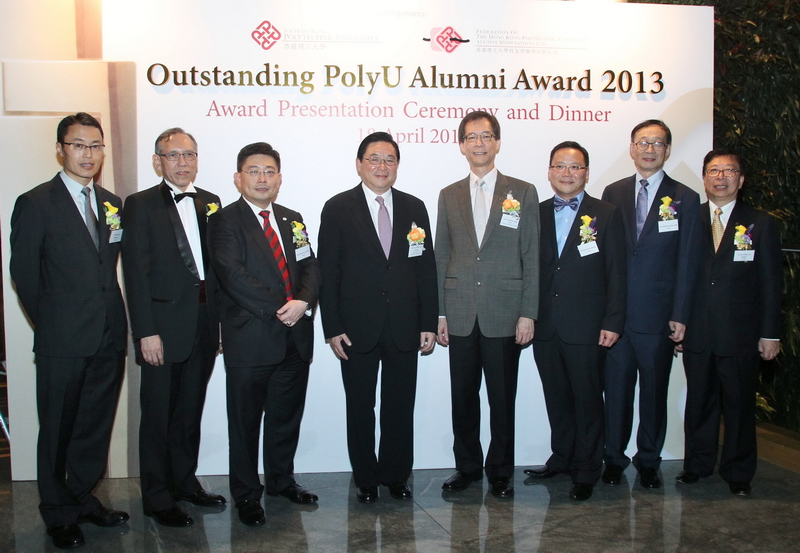 The Hong Kong Polytechnic University (PolyU) presented its Ninth "Outstanding Alumni Award" to seven alumni today (18 April) to pay tribute to their remarkable professional achievements and contributions to their alma mater as well as the community.

The award recipients, in alphabetical order of last name, are:

The awards were presented by the Guest of Honour The Honourable Jeffrey Lam Kin-fung, member of the SAR Government’s Executive Council and the Legislative Council, at the gala dinner held at Hotel ICON. About 400 guests, including senior officials, the University's Court and Council members, PolyU President Professor Timothy W. Tong, friends and supporters from industries, alumni and staff members attended the event.

Jointly organized by PolyU and the Federation of PolyU Alumni Associations (FHKPUAA), the biennial "Outstanding PolyU Alumni Award" aims at honouring outstanding graduates of PolyU and its forerunners – the Government Trade School, the Hong Kong Technical College and the Hong Kong Polytechnic – for their distinguished professional accomplishments and significant contributions to the community and their alma mater. Over the years, PolyU and its forerunners have sent forth more than 320,000 graduates. Launched in late 1996 and now comes to the ninth time, a total of 58 distinguished alumni in various professions have been honoured in the award selection and they are fine testimony of PolyU’s accomplishments in nurturing professional talents for the community.

Dr Chan has over 20 years of experience in IT/telecommunications industry and is currently Chairman of HKC International Holdings Ltd., a company with businesses ranging from distribution, retail and product development of IT/telecommunications products to systems integration in Hong Kong, China, South East Asia and the United States. Under his outstanding leadership, the company was listed in the Stock Exchange of Hong Kong Ltd. in 2001.

Dr Chan is very active in promoting the telecommunications industry in Hong Kong. In his capacity as the Chairman of the Communications Association of Hong Kong since 2006, he has initiated numerous acts in balancing the needs of safeguarding consumer rights in Hong Kong. He maintains a close relationship with his alma mater through active participation in PolyU DBA Alumni Association. He also dedicated himself to social and community services and has served as the Board Member of World Vision Hong Kong since 2008 and Council Member of Hong Kong Federation of Youth Group since 2010.

Ir Dr Chan was the General Manager of CLP Engineering (a wholly-owned subsidiary of the CLP Group) before he retired in 2010. After retirement, he took up the post of Non-Executive Director of the company. He has extensive experience in power systems, specializing in power systems protection, distribution automation, lighting applications and energy services. Throughout his career, he has been involved in various management activities, including business process re-engineering, quality systems management, contingency planning and procurement. He has published over 50 papers and won the Hong Kong Institution of Engineers (HKIE) Transactions Prizes in 2003 and 2007.

Ir Dr Chan has made significant contributions to the engineering profession by serving as the Fellow and former President of HKIE. He has also been actively engaged in community services and undertaken various duties in government bodies and professional organizations. An ardent supporter of his alma mater, Ir Dr Chan has been serving in the advisory committees of various PolyU departments and is currently the Honorary President of PolyU Electrical and Electronic Engineering Alumni Association.

Ir Professor Fan is the Director of WMKY Architects & Engineers. With over 40 years of experience in the construction industry, Ir Professor Fan has introduced a number of new technologies to the Hong Kong construction market including the Daido concrete piling system from Japan and YTONG blocks and panels from Germany. He launched the first precast concrete façade factory and set up the first steel pipe factory in Hong Kong, fabricating large diameter spiral welded steel pipes for water supply such as the Lo Wu to Sheung Shui pipe for the Dongjiang River.

Over the years, Ir Professor Fan has conveyed his valuable experience to the industry through his service to many professional associations and the Hong Kong community. From 2001 to 2002, he was the Chairman of the Joint Structural Division of HKIE. He has been giving unwavering support to his alma mater by serving on various bodies over the past 25 years. In 2009, PolyU conferred on him the title of University Fellowship for his contribution to the University. He was also honoured with "Distinguished Alumni Awards" by PolyU's Department of Building and Real Estate and Department of Civil and Environmental Engineering in 2012. He is currently President of the Federation of PolyU Alumni Associations and a member of PolyU Council.

Mr Lo is currently Vice President of Exterior Design at Renault, a renowned car manufacturing company in France. His car design career began in 1987 in England. With his exceptional professional competencies, outstanding design concepts and management skills, Mr Lo shines on international stage. He is taking a leading role in Chinese car design community, inspiring many of the later comers. His projects have earned many prestigious awards, including Saab Aero X Concept (Concept Car of the Year 2006), Opel GTC Concept (Geneva 2008) and Opel Mervia Concept (Geneva 2008). He was named "Asian Designer of the Year" by ELLE Magazine in 2007 and "World's Outstanding Chinese Designer 2012" by Hong Kong Design Centre.

Mr Lo was appointed Advisor of PolyU's School of Design from 2003 to 2004. Despite his busy schedule, he is willing to share his international experience with students and teach in classes.

Ir Dr Ng has spared no efforts in community services by serving those in need and the underprivileged. He is a fervent supporter of the Lions Club activities. He also cares much about his alma mater. He has served on various advisory committees of PolyU and has played an active role in many fund-raising activities of the University. He was honoured with "Distinguished Alumni Award" by PolyU's Department of Industrial and Systems Engineering in 2012.

Mr Sun has become a Partner of PricewaterhouseCoopers since 1996 and is currently China South and Hong Kong Head of Entrepreneurial Group responsible for client work and management role in supervising over 45 partners and 1,200 staff in the region. He was elected Chairman of The Association of Chartered Certified Accountants, Hong Kong Branch (ACCA-HK) from 2001 to 2002. He is well recognized as a capital market expert and has been appointed as a Member of the Listing Committee of The Hong Kong Exchanges and Clearing Ltd. since 2009.

His appointments with various reputable and renowned organizations are proven track records of his outstanding accomplishments in the accounting profession. He has contributed significantly to the community by sharing his knowledge and experience on accounting and auditing through serving as Board of Directors of Hong Kong Applied Science and Technology Research Institute Co. Ltd., and Hong Kong Science and Technology Parks Corporation. He is also enthusiastic in supporting the continuous development of his alma mater.

Mr Tsui is an outstanding entrepreneur who has established two companies in developing innovative and technologically advanced medical devices for the healthcare sector. An occupational therapist by training, Mr Tsui has devoted tremendous efforts to spearheading new technologies in the field of medical device by introducing high-quality rehabilitation system to Hong Kong. He has been contributing to PolyU's biomedical research by providing funding for research projects including the development of "Exoskeleton robotic hand", with new trade name "Hand of Hope". This device has won many international awards, most notably the Gold Award and Grand Prix Award of the 40th International Exhibition of Inventions of Geneva in 2012. This grand prize was awarded to a Hong Kong organization for the first time in 40 years.

Mr Tsui is also the key partner of PolyU's Innovation and Technology Fund research project titled "Brain Training Device for Neurorehabilitation in Stroke Recovery". He has been offering many training and development opportunities for PolyU students and supporting the charity projects of World Vision.