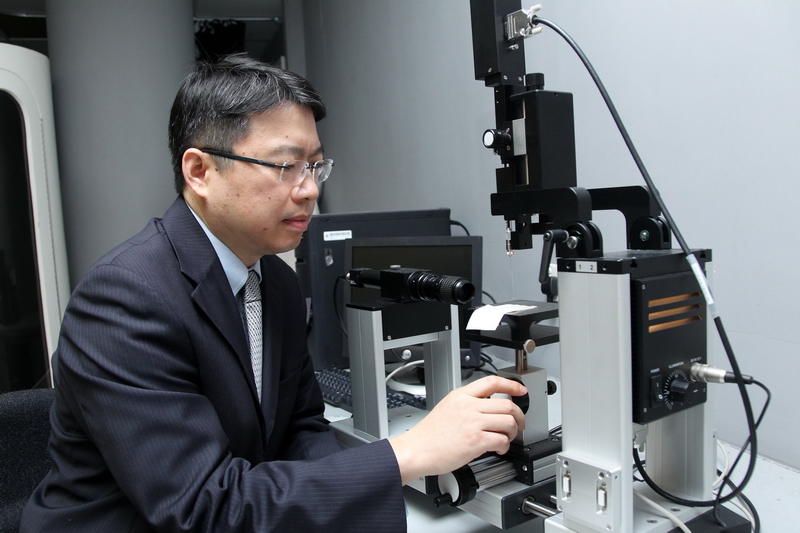 Scientists at The Hong Kong Polytechnic University (PolyU) and Eindhoven University of Technology (TU/e) in the Netherlands have developed a special surface modified cotton fabric that absorbs exceptional amounts of water from misty air for up to 340% of its own weight. What makes this coated-cotton so interesting is that the cotton releases the collected water as the temperature rises. This unique property makes of the coated cotton materials a potential solution to provide water to the desert regions, for example for agricultural purposes.

This ground-breaking research was done by Professor John Xin, Head and Chair Professor of PolyU's Institute of Textiles and Clothing (ITC); his PhD graduate Dr Hengrui Yang; and Dr Catarina Esteves at TU/e. The finding has been published on line and will go to print in the scientific journal Advanced Materials (Issue 8, February 2013). Dr Hengrui Yang was awarded the C C Lee Scholarship in 2008 for her doctorate degree and graduated in 2012. She has currently moved to Melbourne, Australia to pursue her research career.

The scientists grafted a layer of polymer called PNIPAAm to a common cotton fabric. At low temperatures, the cotton modified in this way has a sponge-like structure at microscopic level. Up to a temperature of 34°C it is highly hydrophilic, in other words it absorbs water strongly. Through this property the cotton can absorb 340 % of its own weight of water from misty air – compared with only 18% of water from bare cotton. When the environment temperature rises to 34°C or above, the material becomes hydrophobic or water-repellant and its structure becomes completely closed. Pure water absorbed at lower temperature will be released. The research revealed that the water absorbing and releasing cycle can be repeated many times.

The research team is inspired by nature for the development of fog-catching cotton fabric. They noted that beetles in desert areas can collect early morning dew and drink water from fogs, by capturing water droplets on its body which roll into its mouth. Similarly, some spiders capture humidity on their silk network. The innovative new fabric collects and releases water from misty environments simply as the night-and-day temperature changes. This interesting property implies that the material may potentially be suitable for providing water in deserts or mountain regions, where the air is often misty at night.

A further advantage is that the basic material – cotton fabric – is cheap and widely produced. The surface modification with PNIPAAm increases the cost only slightly by 12% which makes the application of the new fabric viable.

Currently fine-mesh 'fog harvesting nets' are already being used in some mountains and dry coastal areas, but they work on a different principle: they collect water from misty air by droplets that gradually form on the nets and fall to the ground or a suitable recipient. But that system depends on a strong air flow, wind. The new fabric developed by the research team works without the need of wind. In addition, new fabric can be laid directly where the water is needed, for example on cultivated soil.

On top of agricultural use, the research team is also considering other completely different applications such as camping tents that collect water at night, or sportswear that keeps perspiring athletes dry.

PolyU and TU/e scientists also intend to investigate further how they can optimize the quality of the new material. For example, they hope to increase the amount of water absorbed by the new system. Moreover, they also expect to be able to adjust the temperature at which the material changes from water-collecting to the water-releasing state, towards lower temperatures.

Head and Chair Professor, Institute of Textile and Clothing