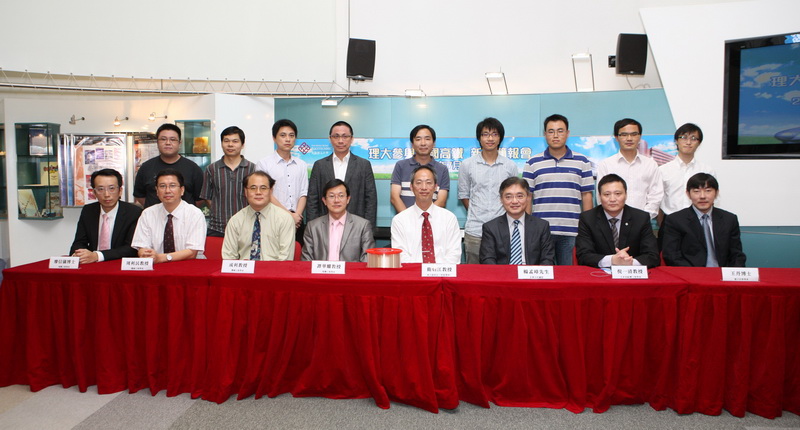 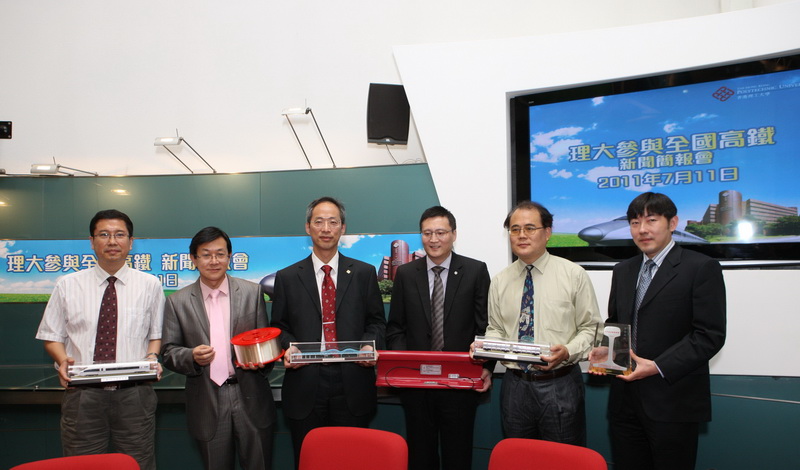 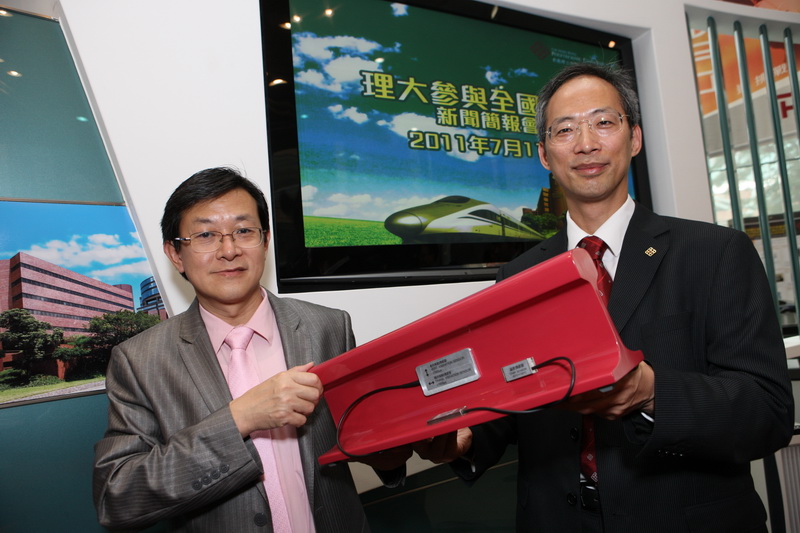 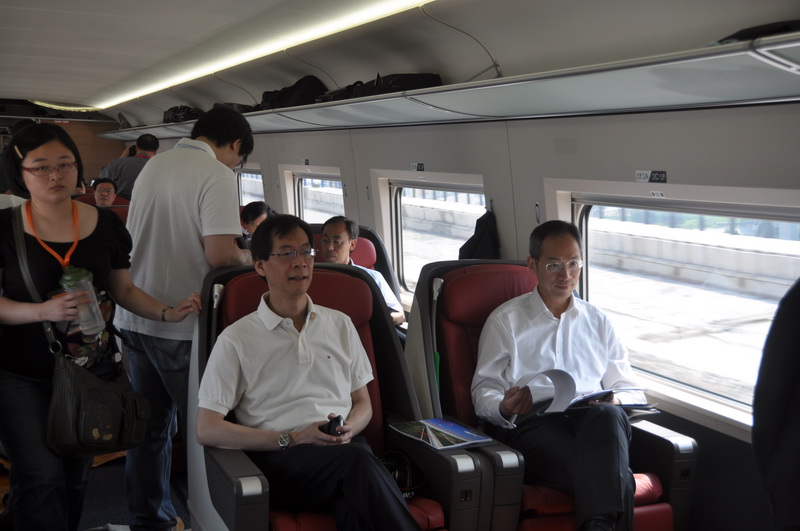 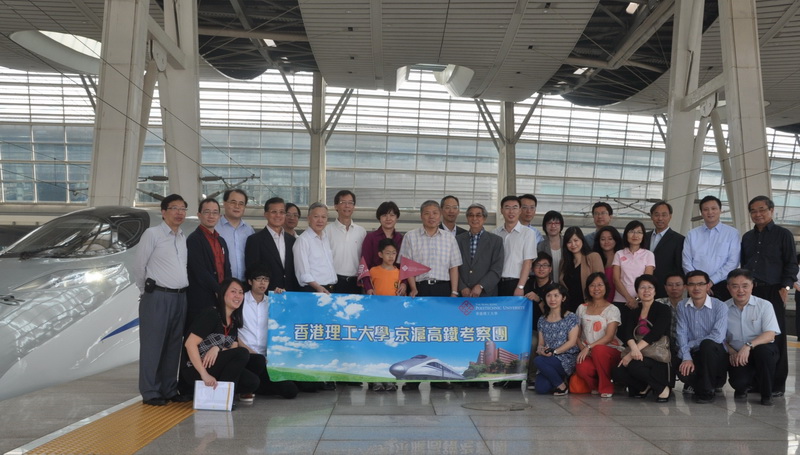 The Hong Kong Polytechnic University (PolyU) is collaborating with Southwest Jiaotong University and Dalian Jiaotong University to study the use of its proprietary Advanced Fibre Bragg Grating Sensor (FBG) Systems for monitoring the structural health and safety of the nation’s fast-expanding High-Speed Rail.

PolyU President Professor Timothy W. Tong and Vice President (Research Development) Professor Alex Wai have been recently invited to lead a delegation to join a test ride along the Beijing-Shanghai High-Speed Rail before its official opening. The delegation members included several Council Members, key researchers and student representatives. They were all impressed by the expedient services of the High-Speed Rail.

PolyU researchers and their mainland partners have already installed the “Advanced Fibre Bragg Grating Railway Monitoring System” in several parts of the high-speed rail across the country. The hundreds of optical sensors will provide information on vibration, acceleration and temperature change for engineering staff, helping them to monitor the condition of tracks and railcars as well as structural health of the rail foundation.

Professor Alex Wai, who is also Chair Professor of Optical Communications, said optical fibre technology has radically changed the way people communicate and its application has extended to a wide range of fields including sensing systems, life science, measuring and structural engineering. The unique characteristics of optical fibre sensing technology offer many advantages that make them ideal for use in railway systems.

In regard to monitoring track and trains, the team under Professor Ho Siu-lau and Professor Tam Hwa-yaw has already completed the installation of the “Advanced Fibre Bragg Grating Railway Monitoring System” in several important parts of the high-speed rail. The system now provides real-time data for analysis by engineering experts of PolyU. It can also keep track of train speed, axle balance and vibration data for record and further analysis. The system not only benefits the high-speed rail in operation, but also contributes to further research in this important area.

On the other hand, Professor Ni Yiqing, Co-ordinator for the University-wide Interdisciplinary Research on Railway-related Projects, has been working closely with Dalian Jiaotong University to install PolyU’s optical sensors on the new generation of high-speed inspection trains for monitoring purpose. The optical sensors for wind pressure measurement developed by the team have been successfully installed and used for this important pilot run.

PolyU has a Smart Railway Research Laboratory on its campus. Under the headship of Professor Ho Siu-lau, the lab focuses on the study and improvement of the railway operation and safety. PolyU researchers have also made concerted efforts to improve such technology and explore their use in different real-life settings.

Meanwhile, the research team at the Department of Mechanical Engineering will consolidate their experience and expertise in the area of structural health monitoring for use in the High-Speed Rail. Using ultrasonic wave technology, the team has already developed an instantaneous diagnosis system which can detect cracks arising from metallic fatigue and corrosion of key parts in the track and rail. This new technology can be also combined with the use of laser actuating/sensing technology for monitoring the structural health of bridges, tunnels, tracks, train bodies, bogie frames and wheel axles.

The FBG sensors developed by PolyU are small periodic structures created inside the 10-µm core diameter of standard 125-µm thick optical fibres. The measurement information is encoded in the wavelength of the reflected light from the FBG’s. Wavelength is an absolute parameter and any changes in the received signal strength do not affect the sensing information, ensuring highly reliable sensing information. Another unique feature of the FBG sensing systems is that hundreds of FBG sensors along a single optical fibre as long as 100 km long can be utilized to measure many different parameters such as temperature, strain, vibration, acceleration, and inclination, replacing many different types of conventional sensing systems. These features greatly enhance the reliability of the FBG sensing systems which provide the industry a very cost-effective integrated solution.

While traditional electronic sensors require large space for instrumentation, EMI shielding and cabling to withstand electromagnetic interferences, FBG sensors are fabricated onto tiny optical fibres and not affected by external interferences and so can monitor points not reachable by electrical sensors. With the use of FBG sensors, many of the previously inaccessible points now become readily accessible. This cutting-edge technology has been used by PolyU in different large-scale projects. One of the recent applications is in the structural health monitoring of the 600-meter Canton TV Tower, which is currently the tallest TV tower in the world.