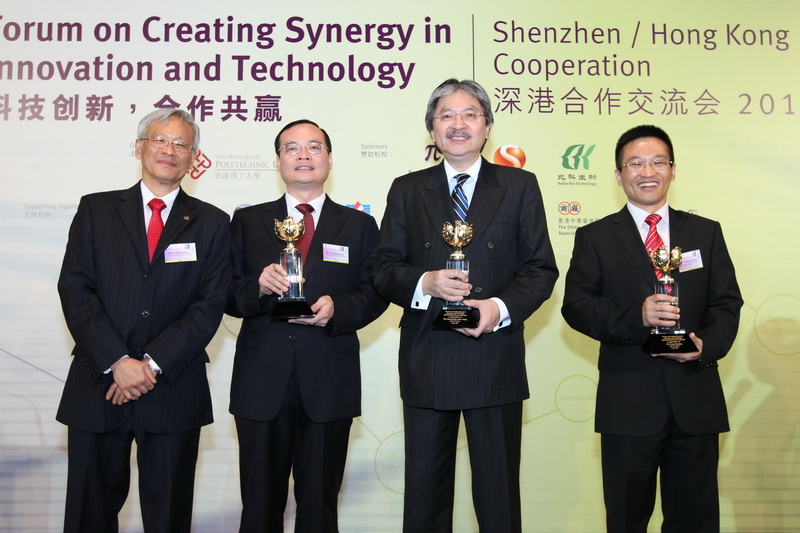 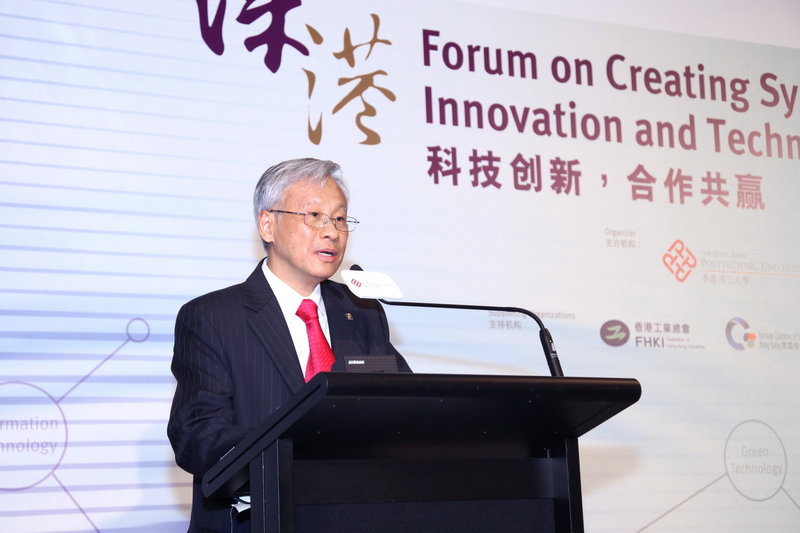 Organized by The Hong Kong Polytechnic University (PolyU) and supported by the Government’s Innovation and Technology Commission and the Science, Industry, Trade and Information Technology Commission of Shenzhen Municipality, the “Forum on Creating Synergy in Innovation and Technology – Shenzhen/Hong Kong Cooperation” was held today (8 July) and has attracted more than 200 participants, including business leaders, Consuls General in Hong Kong and Guangzhou, senior government officials and university presidents/vice-presidents.

This major forum aims to promote "Shenzhen-Hong Kong Innovation Circle" as a hub for sustainable innovation and technology collaboration, and to reinforce the advantages of the Circle as a collaboration platform to venture into the Chinese mainland for enhancing the regional growth and competitiveness. It was opened by Guests of Honour Mr John Tsang, Financial Secretary of the HKSAR Government; Mr Gong Guoping, Deputy Director General of the Guangdong Provincial Department of Science and Technology; and Mr Yuan Baocheng, Vice Mayor, Shenzhen Municipal People’s Government and Chairman of the Shenzhen side of the Steering Group on Shenzhen/Hong Kong Co-operation in Innovation and Technology.

Addressing the audience, PolyU Acting President Professor Philip C. H. Chan said, "Hong Kong is in a strong position to benefit from research and development, especially with the current trend of cross-border operations. The collaboration between Hong Kong and Shenzhen would enable both cities to capture the enormous market opportunities brought about by globalization, thereby contributing to the economic development of both sides. PolyU has a role to play with its research for cross-border applications."

It was followed by a plenary session in which Mr Nicholas Brooke, Chairman of the Board of Directors, Hong Kong Science and Technology Parks Corporation, Mr Zheng Hongjie, Director General, Authority of Qianhai Shenzhen-Hong Kong Modern Service Industry Cooperation Zone of Shenzhen; and Mr Mark McCombe, Group General Manager and Chief Executive Officer of Hong Kong, The Hongkong and Shanghai Banking Corporation Limited shed light on the current development of innovation and technology from financial perspectives.

To facilitate exchange of ideas, the organizer has arranged for two sessions of panel discussion with sharing by four Consuls General and CEOs with business across the border. The first session focused on the role of Hong Kong as a link between the East and the West for the development of Innovation and Technology, with insightful sharing by the Consuls General of Israel, Germany, the UK and the US. The second session saw the active participation of many CEOs sharing their precious experience on cross-border operations, including Dr David Chu, CEO of DuPont Apollo Limited; Mr Bernd Haertlein, Member of the Board of Directors, E-T-A Elektrotechnische Apparate GmbH, Germany; Mr Henry Leung, Chief Operating Officer and Executive Director, GP Batteries International Limited; Dr Humphrey Leung, Group Chief Executive Officer, Solomon Systech Limited; and Dr Raymond Leung, Chairman and Chief Executive Officer, TDK China Co Limited.

The forum was held at the Hotel ICON, the teaching and research hotel of PolyU. For more information of the forum, please visit http://www.szhkforum.com/