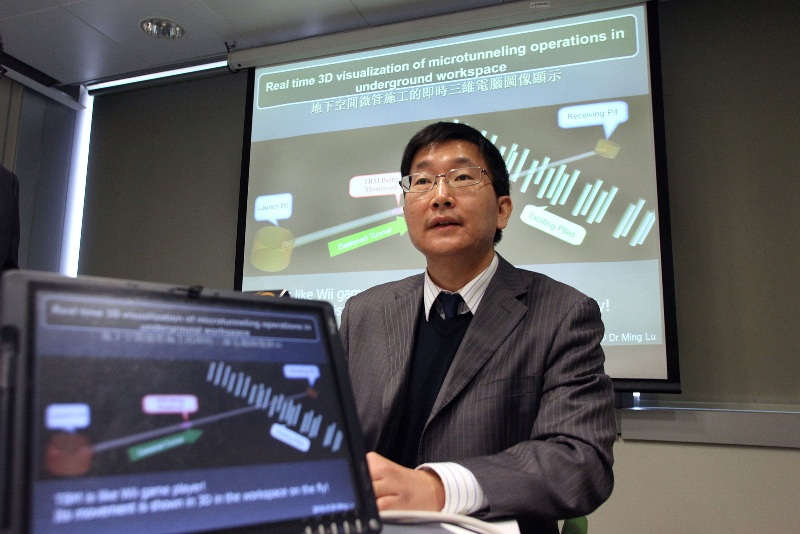 Working in collaboration with the industry and utility companies, civil engineering experts of The Hong Kong Polytechnic University (PolyU) have made great strides in expediting the use of "trenchless" technology for installing underground utility pipeline in Hong Kong. This breakthrough is expected to further promote the application of trenchless technology, by minimizing the nuisance of public works upon existing traffic and businesses on the surface.

According to Dr Lu Ming, Associate Professor of PolyU Department of Civil and Structural Engineering, the "trenchless" technology is developed in response to community's growing concern for environmental sustainability of underground piping works. In comparison to traditional method, the use of microtunneling and pipe jacking for installing subsurface pipeline provides a sustainable urbanization technology that is "trenchless" in nature, making it more community-friendly and environmentally-friendly for well developed, densely populated cities such as Hong Kong.

Led by Dr Lu Ming, the academia-industry research team has successfully developed the TunnelingGSV (GSV stands for Guide, Sense, and Visualize) which facilitates the use of trenchless technology. The TunnelingGSV system is coupled with the use of a sophisticated micro Tunnel Boring Machine (TBM) which works like an underground robot for piping work. TunnelingGSV can continuously and automatically survey the TBM's positions by a robotic total station and derives any tunnel alignment deviations in real time. Further, given the coordinates of three observation points on the TBM, TunnelingGSV can accurately determine the rotation angles of the TBM in the underground space by invoking sophisticated computing algorithms.

Through wireless data communication and computer visualization, TunnelingGSV visualizes the underground working environment in real-time 3D computer graphics, supplemented with the use of Internet technology to enhance communication. This breakthrough thus provides engineers with greater convenience in the application context of microtunneling and pipe jacking based on integration of automated data collection with real time computing.

With the assistance of the Hong Kong and China Gas Company Limited, CLP Power Hong Kong Limited, Black & Veatch, Kum Shing Construction Company Limited and Reliance-Tech Limited (a subsidiary of Chun Wo Development Holding Limited), the first prototype of TunnelingGSV system was set up at a microtunneling site near So Kwun Wat, Tuen Mun for three-month field trials in late 2009. Coupled onto a $12 million-worth micro TBM, the TunnelingGSV system had been successfully implemented in installing a 55m long section of a 220m-concrete tunnel with an inner diameter of 1.2m which was laid under a 40m wide nullah.

Looking ahead, Dr Lu is optimistic that the TunnelingGSV system can provide tunneling engineers with timely awareness of the TBM's position and rotation changes, helping prevent such potential hazards as: (1) TBM is derailed or even trapped in boring through complicated ground conditions, (2) the TBM advances too fast, leading to "over-cut" of underground soil and undesired ground settlement in the adjacent area. It also automatically produces accurate as-built records in terms of the tunnel alignment and the tunneling operations.

The research and field testing of TunnelingGSV was presented and reviewed at a seminar held earlier this year at the headquarters of the Hong Kong and China Gas Company Limited. Dr Lu and his research team were invited to demonstrate the effectiveness of the TunnelingGSV system under practical constraints in terms of (1) TBM guidance and tunnel alignment control and (2) real-time 3D visualization of TBM operations, as-designed vs as-built tunnel sections in the underground workspace.