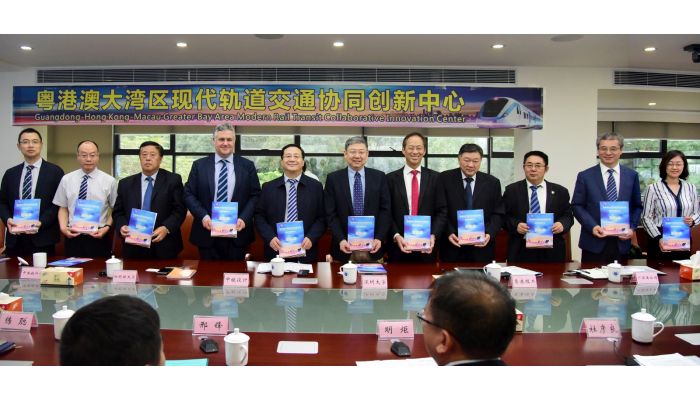 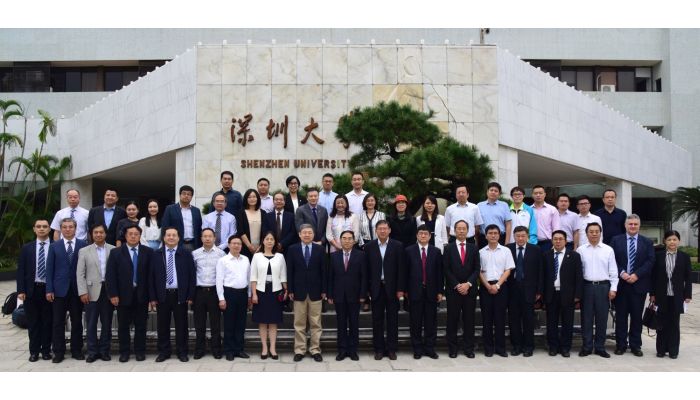 The Hong Kong Polytechnic University (PolyU) and Shenzhen University (SZU) jointly spearhead the establishment of the "Guangdong-Hong Kong-Macau Greater Bay Area Rail Transit Joint Innovation Union" (the Union), upon signing a memorandum of understanding (MoU) on 12 October 2018 with 10 other universities and enterprises. The Union aims to advance research in the area of rail engineering, thus contributing to the development of the rail transit system within "Guangdong-Hong Kong-Macau Greater Bay Area" (GBA).

The Union will serve as the joint innovation platform of rail transit in GBA through facilitating research collaborations between universities and industries. The Union will seek research and technological breakthroughs to cater to the tremendous needs of safe operations and maintenance of the rail transit in GBA. The research efforts will focus on smart sensing and health monitoring of rail infrastructure, safety alert mechanism, disaster resilience program, crisis contingency and recovery plan etc., to promote safe operation and maintenance of rail transit system. The Union will take advantage of the academic resources and strengths of the participating parties to foster talent nurturing in GBA, and to promote technology transfer as well as commercialisation of the research outcomes within and beyond GBA.

Ir. Professor Alexander Wai, Vice President (Research Development) of PolyU, said, "Leveraging the 'one country, two systems' principle and the distinctive feature of internationalisation, Hong Kong has the full advantage to become an international innovation and technology hub. Hong Kong universities play a pivotal role in the development of science and technology, grooming international talents and facilitating innovation and entrepreneurship. PolyU has been actively participating in various national research projects over an extended period, from space missions and high-speed rail in China to the recent research collaborations in GBA for technological advancement including the establishment of the first Biotechnology and Translational Medicine research platform, Joint Center for Immunotherapy and the Supercomputer Union. Capitalised on the strengths of the participating institutions, we look forward to seeing more collaborations in the Union so that innovative technologies can be broadly applied in rail transit system."

Professor Li Qing-quan, President of SZU, said that the launch of the Union will provide a strong boost to the developments of GBA. The Union comprises of universities and research institutions within and beyond GBA, indicating a strong base for diversified cooperation. He believes the Union will bring about profound outcomes in the R&D of the rail transit system. Professor Du Yan-liang, Academician of China Engineering Academy also remarked that the Union will take into account the needs for rail transit development within GBA in developing its research agenda with a view to facilitating the development of smart transportation system.

About the 12 participating parties of the Union:

The Hong Kong Polytechnic University
The Hong Kong Polytechnic University (PolyU) has spared no efforts in developing applied research and innovative technology. Apart from basic research, PolyU has proactively fostered research applications in rail transit. For instance, the National Rail Transit Electrification and Automation Engineering Technology Research Center (Hong Kong Branch) is dedicated to the technology innovation for High-Speed Rail and technology transfer for serving the development of a safe and reliable Chinese railway. Various R&D projects have been carried out with different universities and the industry.
https://www.polyu.edu.hk

Guangzhou University
With 90 years of history, Guangzhou University is named after the third largest city in China. The university also develops a national-level platform, such as the establishment of an international science and technology cooperation base for wind and structural safety of the Ministry of Science and Technology to support national development.
http://english.gzhu.edu.cn/index/About_Guangzhou_University.htm

Beihang University
Beihang University was founded in 1952, with the combination of the aeronautical departments of Tsinghua University, Beiyang University, Xiamen University, Sichuan University, etc. Beihang has excelled as one of the first 16 key universities in China and has undertaken a large number of national (or national defense) scientific research tasks and cooperation projects.
http://ev.buaa.edu.cn/About/Beihang_at_a_Glance.htm

Southwest Jiaotong University
Southwest Jiaotong University (SWJTU) was founded in 1896 and is known as the cradle of China's railway engineers. SWJTU strives to provide strong support to boost the international profile of China's high-speed rail and enhance the development based on its academic excellence and research competitiveness in the field.
http://english.swjtu.edu.cn/About/Figures_and_Facts.htm

Imperial College London
Imperial College London is a world top ten university with an international reputation for excellence in teaching and research. The Railway and Transport Strategy Centre (RTSC) is a globally recognised applied research and consultancy group for a variety of transport topics such as growth, productivity, and transport investments; public transport supply; and automated transport data.
https://www.imperial.ac.uk/about/introducing-imperial/

China Academy of Railway Sciences Corporation Limited (CARS)
CARS was founded in 1950 and is the only comprehensive research institute with multi-disciplines and multi-specialties in China Railway industry. It has built the national railway test center, and has been equipped with over 40 laboratories of all specialties, and established several state-level innovation platforms.
http://home.rails.com.cn/index.php?id=110